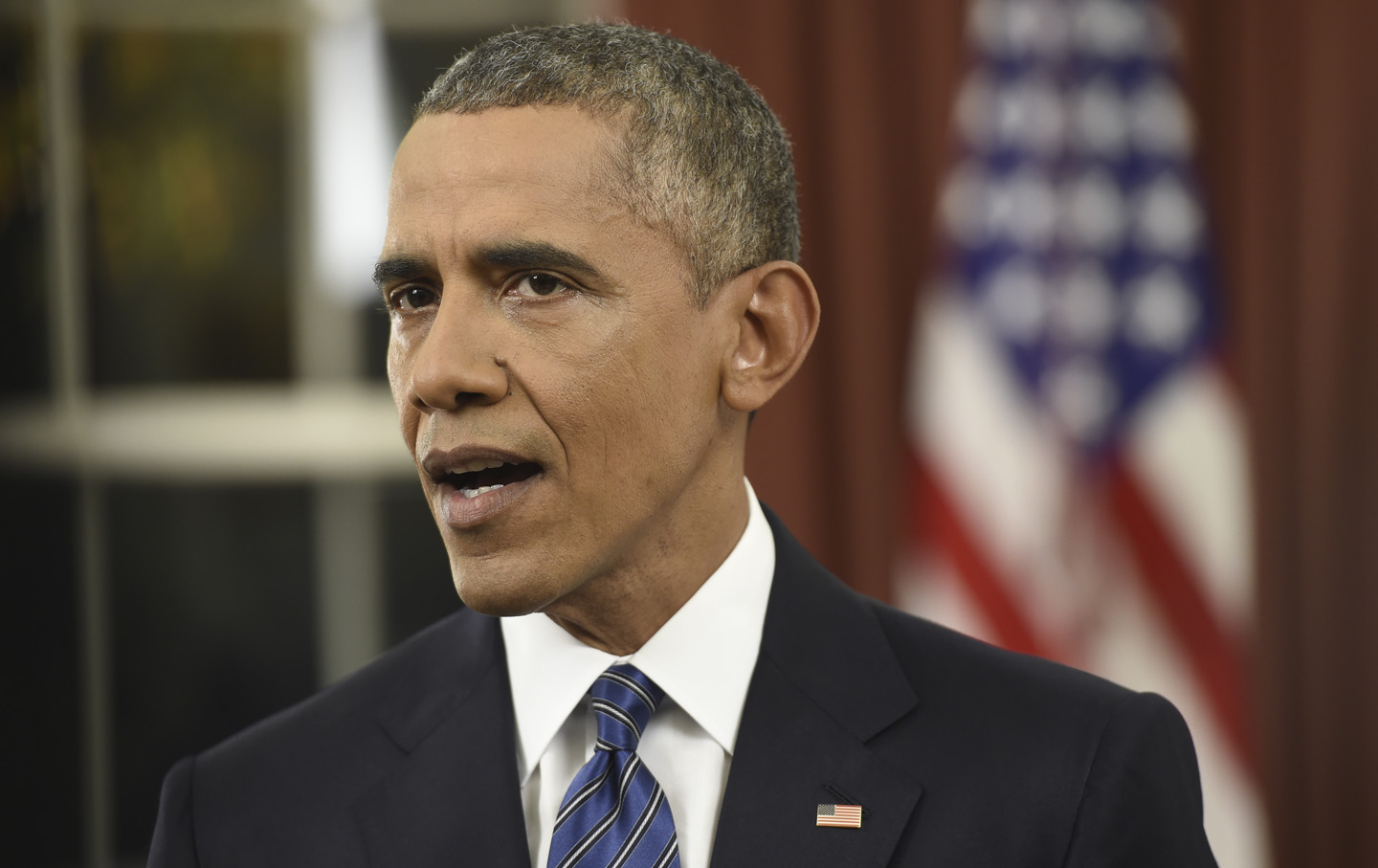 US President Barack Obama speaks to the nation from the Oval Office of the White House in Washington, December 6, 2015. (Reuters / Saul Loeb / Pool)

President Obama made a number of powerful proposals in his address to the United States Sunday night—for sensible gun-control measures, for respecting this country’s restrictions against religious tests, for an understanding of the role that Muslims in the United States and abroad can play in combating terrorism. Speaking in a tense moment following the terrorist attacks in Paris and San Bernardino, Obama asked Americans to reject fear and bigotry and to embrace reason and the rule of law.

“We were founded upon a belief in human dignity that no matter who you are, or where you come from, or what you look like or what religion you practice, you are equal in the eyes of God and equal in the eyes of the law,” the president told the nation, in a rare televised address. “Even in this political season, even as we properly debate what steps I and future presidents must take to keep our country safe. Let’s make sure we never forget what makes us exceptional. Let’s not forget that freedom is more powerful than fear. That we have always met challenges, whether war or depression, natural disasters or terrorist attacks, by coming together around our common ideals as one nation and one people.”

Of course, “in this political season,” Obama’s appeal to reason drew predictable denunciations from the neocon fever swamp. Republican presidential candidates, drunk on outdated patent medicine from Dick Cheney’s cabinet, were condemning the president for inaction even as Obama proposed action.

Despite what the conservatives critics claimed, the agenda Obama laid out was an ambitious one.

The proposals the president made merit debate. Some will be rejected. Others will be reworked before they are accepted.

“I think it’s time for Congress to vote.”—President Obama on authorizing war with ISIS

But one proposal from the president should be beyond debate. He said the war in which the United States is currently engaged must be reviewed by Congress. On this, the president was both practically and constitutionally correct.

Obama’s speech was nuanced in its discussion of how to pursue what he acknowledged is a war against ISIL. Even as he outlined a “strategy to destroy ISIL” that includes military action in Syria and Iraq, Obama argued against repeats of old mistakes, saying, “We should not be drawn once more into a long and costly ground war in Iraq or Syria. That’s what groups like ISIL want. They know they can’t defeat us on the battlefield. ISIL fighters were part of the insurgency that we faced in Iraq. But they also know that if we occupy foreign lands, they can maintain insurgencies for years, killing thousands of our troops and draining our resources, and using our presence to draw new recruits.” But make no mistake, what the president was proposing was war, with “thousands of air strikes against ISIL targets” and “special forces” and “an American-led coalition.”

Reasonable people can, and will, disagree with the president’s plan.

There ought, however, to be unanimity on the point that this plan requires congressional scrutiny.

“[If] Congress believes, as I do, that we are at war with ISIL, it should go ahead and vote to authorize the continued use of military force against these terrorists,” Obama said. “For over a year, I have ordered our military to take thousands of air strikes against ISIL targets. I think it’s time for Congress to vote to demonstrate that the American people are united and committed to this fight.”

Obama presumes he will get the authorization he seeks. And he may be right.

But no matter what the decision by the House and Senate, Congress must take up this issue.

The US Constitution is clear: The power to declare wars rests with Congress, not the president.

Yet this president, like his predecessors, has waged war without adequate congressional authorization.

This is the point that Congresswoman Barbara Lee, D-California, has been making for months.

“Every day, this war escalates and more American troops are placed in harm’s way. Congress must live up to its constitutional duty to give the American people a voice on matters of war and peace,” says Lee. “National security experts are clear, there is no military solution to this conflict. Only a comprehensive, regionally-led strategy that addresses the underlying political, economic, diplomatic and humanitarian issues in the region will ultimately be effective.”

Lee has proposed legislation—HJ Res. 30—that lays out a comprehensive strategy for addressing threats “while ending the blank checks for endless war that have allowed this conflict to escalate unchecked by Congress.”

Noting that “President Obama sent Congress a draft military authorization” and that “it has remained on the Speaker’s desk,” Congresswoman Lee says “it’s past time to hold a serious debate on the costs and consequences of yet another war in the Middle East.”