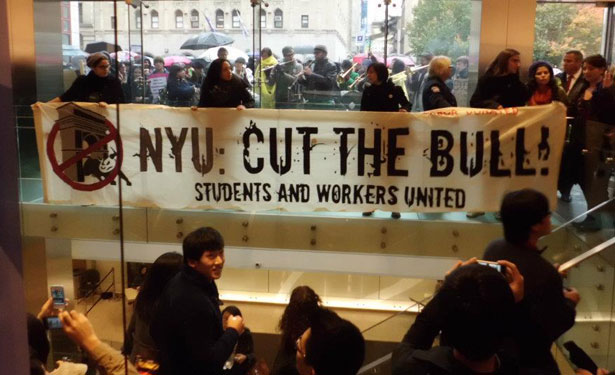 At 11 o’clock last night, Hadi Gharabaghi, a PhD student in cinema studies, learned over email that his colleagues at NYU had voted to unionize. The vote was a landslide—620 to 10—and makes NYU the only private university with unionized teaching assistants. The results carry a twinge of déjà vu: This is a designation that NYU has had before, from 2002 until 2005, when NYU president John Sexton decided to stop acknowledging the union. Strikes and many rounds of negotiations later, the university and the union—a branch of the United Auto Workers, which represents more than 45,000 academic workers across the U.S—agreed late last month that the university would again bargain with the UAW if a majority of graduate assistants voted in favor of representation. The school also promised to remain neutral over the course of the election.

“We should be a major investment for the school,” said Gharabaghi, whose son will soon be turning one. According to the agreement, NYU and union are supposed to immediately begin negotiating—they hope to have a completed contract by the end of the academic year—and one major priority for Gharabaghi is family healthcare benefits. He’s currently on a state-subsidized plan because NYU charges graduate students a 33 percent increase in dependent premiums. “I shouldn’t have to choose between my son and my PhD,” Gharabaghi said.