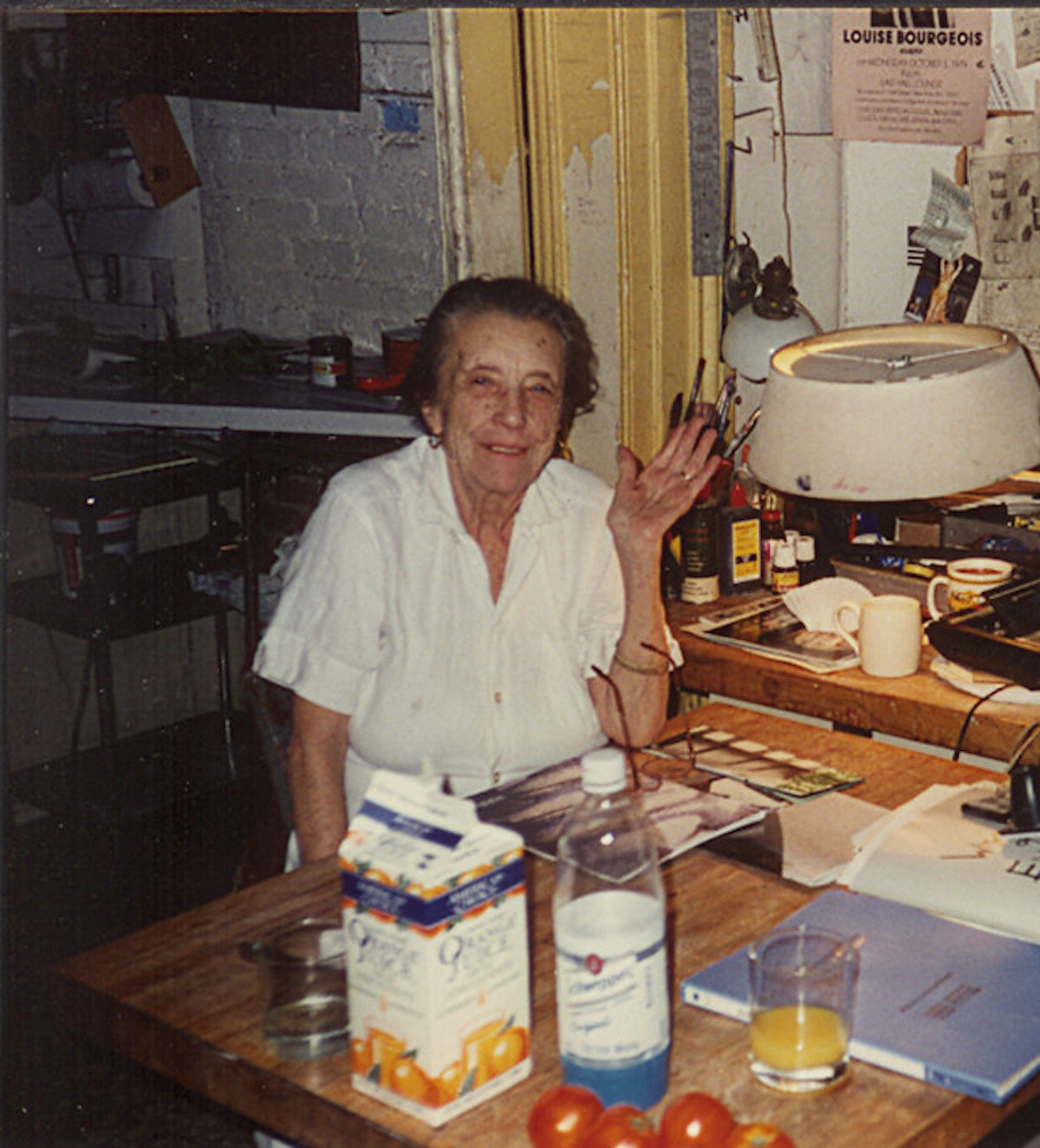 For many people, Louise Bourgeois is something of a legend. She grew up caring for a sick mother, in the shadow of a domineering, philandering father, and turned to art after her mother died when Louise was 21. She transmuted the pain of her childhood into evocative and provocative sculptures, drawings, prints, and other artwork. She left her home country of France for New York City, where she raised three sons and made and showed art amid the macho Abstract Expressionist scene. She was the subject of the Museum of Modern Art’s first retrospective devoted to a female artist—in 1982, when she was 70 years old. Through it all, she never apologized for sculpting penises, or for the fits of rage that sometimes caused her to break her own work. For her, art was a project of grappling with life and understanding herself. As Bourgeois once said, “The artist has the privilege of being in touch with his or her unconscious, and this is really a gift. It is the definition of sanity.”1

Writing about such a person is daunting. Writing from her point of view, as if one were inside her head, is even more so. Yet that’s the task that Jean Frémon has attempted in Now, Now, Louison, translated from the French by Cole Swensen and published in the United States by New Directions (the book was first released in the United Kingdom by Les Fugitives).2

Now, Now, Louison is not a biography. In an essay at the end of the book, Frémon calls it “a life imagined” and “a portrait made from memory moving through time.” A longtime gallerist, Frémon knew Bourgeois for more than 30 years and worked with her on exhibitions. He is also a prolific writer, penning poems and essays about art, as well as more hybrid, genre-fluid books about people (sometimes artists, like Robert Ryman). Now, Now, Louison falls into the latter category. The best way to describe it may be as a fleeting, fictionalized sketch of its subject’s inner life.3

Bourgeois’s father had wanted a son, and in the book’s telling, he called her Louison, the male version of her name. Frémon captures the artist’s complicated relationship with her father—and, to an extent, with feminism—when he writes, “The boy’s name didn’t bother you a bit; it gave you a kind of legitimacy that you savored in silence.” The 112-page text is structured as an extended stream-of-consciousness monologue delivered by the fictional Bourgeois and broken into short passages. Louise/Louison talks to herself, mostly using the second person, and reflects on her life in the scattered way that old people are wont to do, alternating between insight and bemusement, memories and philosophical observations. “The fridge is empty. You don’t eat when you’re alone,” Louise comments, continuing:4

Cooked enough in your life. The family. Always ready to pull up a chair. In Easton, at the table: Robert, the children, their friends…with a collective clear conscience…the food would get to the table all by itself, like magic, every day a different dish, no one even asking where it all came from. 5

And then, returning to the need to eat in the present day, she settles on a slice of toast with banana and sardines, joking, “Madame is served, royally.”6

By the end of the book, Bourgeois, who lived until the age of 98, is on her deathbed. Maybe the whole monologue is a memory that has taken place in the half-hour before she passes away. Or maybe it’s been longer than that—a week, a month, even a year. Now, Now, Louison begins with action—Bourgeois opening her home’s windows and doors amid a heat wave—and includes one early trip outside, but it gradually withdraws from the world, just as its subject did at the end of her life. As Frémon writes, “there was no ‘day when’—you just never went outside again, that’s all.”7 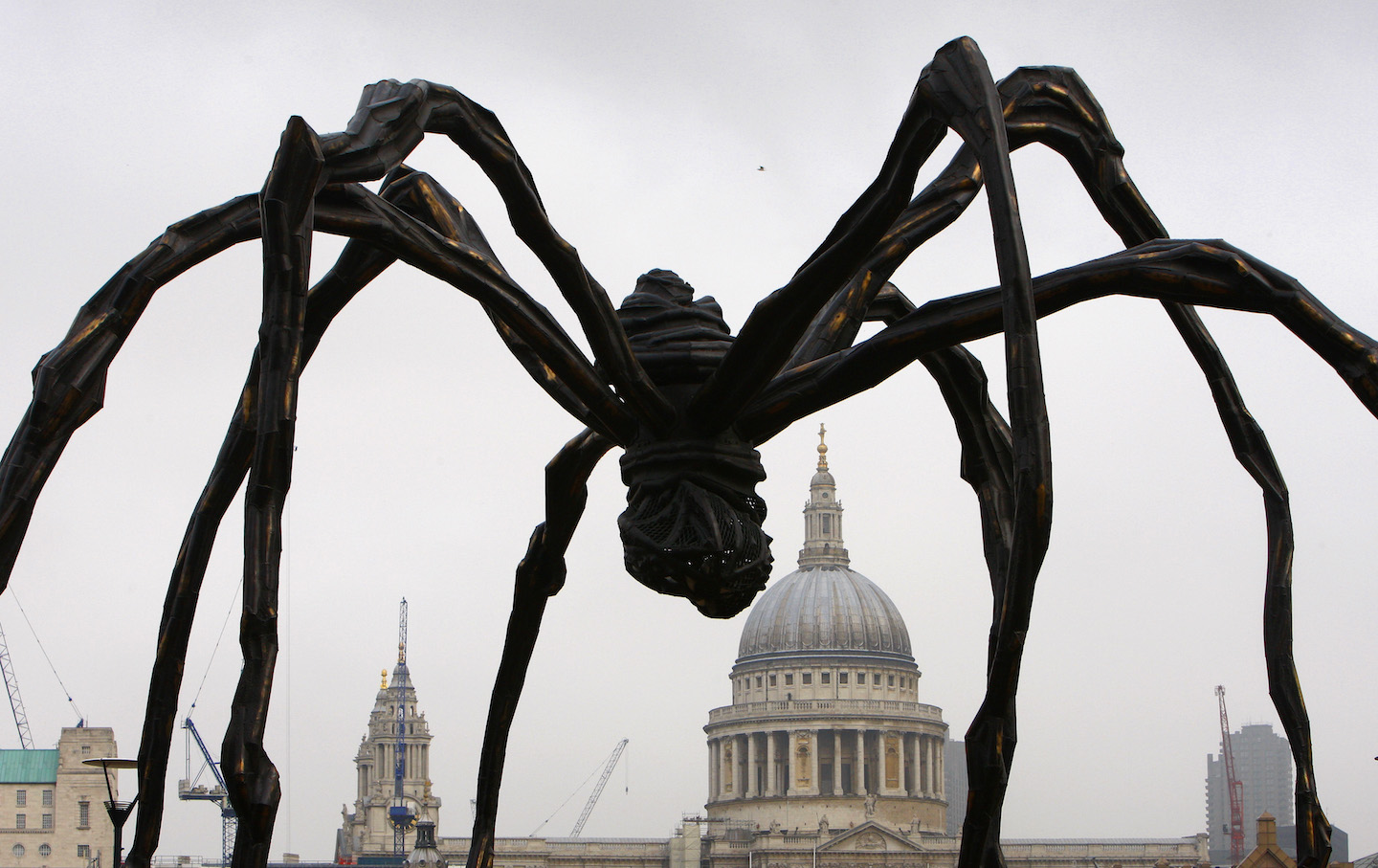 Frémon’s style is poetic and often poignant. There’s a rhythm and internal logic to the flow of the book that’s all the more impressive because of its purposeful fragmentation. The text loops back on certain subjects and motifs, the way humans do in their minds. The most important of these, unsurprisingly, is art. Frémon clearly understands how much creating art informed Bourgeois’s life, and his writing about her work is often his most insightful. Sometimes it comes in flashes, as when his fictional Bourgeois calls her sculptures “messages to the dead that the living intercept.” Other times, it’s more drawn out:8

Out of frustration, you make sculpture. Destroying, repairing, mending, patching together; there’s love in all of it…. It’s a kind of equation—on one side, pain, anxiety, and frustration; on the other, wood, marble, bronze. The trick is to get them to infuse each other. With sculptures, you weave connections. Everything’s a matter of weaving. 9

This is a perceptively layered passage. Bourgeois’s parents ran a tapestry business that she helped with as a girl. That history is most obvious in her own fabric and sewn pieces, but here Frémon connects it on a deeper level to the works she made in other mediums: thin, abstracted wooden figures; marble body parts and suggestive bulges; bronze spirals and spiders. Arachnids, too, are weavers, which was part of Bourgeois’s fascination with them. For her, spiders represented her mother, manifesting similar qualities of strength, protectiveness, and resourcefulness. Frémon entwines these different aspects of Bourgeois’s practice and biography with an impressively light touch.10

That deftness, along with the book’s enchanting tone, have earned Frémon and his translator rightful praise. “It is the forceful, irascible, often funny nature of this voice that accounts for so much of the text’s joy, lifting it beyond its potential to be seen as exploitative,” wrote one critic. Indeed, Frémon and Swensen have packed an impressive amount into a small space and painstakingly crafted a convincing portrait of a woman. I just can’t help but see the crucial ways in which that woman is not Bourgeois.11

Jack Whitten’s Journals Are a Future Classic of Art Writing

In the passage quoted above, the word “frustration” appears twice, but as a feeling it’s absent from the book. So, too, is the anger—in her work and in herself—that Bourgeois was known for. It made her difficult and often destructive toward people and objects alike. “She generates…psychological energy,” said the curator and critic Robert Storr in the documentary Louise Bourgeois: The Spider, the Mistress, and the Tangerine. “She’s also a vampire.”12

The Louise Bourgeois of Now, Now, Louison is not a vampire. She’s not even entitled to her own rage. This Bourgeois is an old woman who’s been softened, neutered, and romanticized by the gaze of a male writer. When she does show emotion, it’s an acute helplessness, a kind of internal shattering triggered by the cutting of an apple, from which she’s saved by her assistant, Jerry Gorovoy. That moving section seems grounded in reality—after her father’s death in 1951, Bourgeois became very depressed, and while she did recover, she may well have had further breakdowns. What’s missing, however, are counterparts to suggest the full range of feelings that possessed Bourgeois, including the harsher ones. As she herself observed, “My emotions are inappropriate to my size. My emotions are my demons.”13

Frémon’s book is a short work of fiction, not a comprehensive biography. It doesn’t need to be doggedly faithful to the facts. But the absence of such an important part of Bourgeois’s character makes for a somewhat monotonous portrait in the end, despite the book’s brevity. Now, Now, Louison lacks the tension and magnetism that seemed lodged in the real Bourgeois’s core. To watch her speak is enthralling.14

All this raises the question: Who is Now, Now, Louison intended for? What is its purpose? Frémon doesn’t really provide an answer in his essay. He explains how the idea came about: A friend suggested it at the opening of a Bourgeois retrospective in Paris in 1995, which is also the year that Frémon began working less with the artist, although he still went to see her steadily. He started working on the project but admits that “even if I came up with something decent, I would never publish it during her lifetime.” He seems to view the book as a tribute of sorts, noting that he “wanted to render…not precisely what she said, but again, her tone, her rhythm.”

The problem is, Bourgeois’s tone and rhythm are already accessible; they aren’t a secret known only to him. What biographical fiction offers at its best is something new—a different context for a historical figure or speculation about parts of their life that remain unknown. Now, Now, Louison re-creates an identity that’s already well-documented, and so ends up feeling slight in comparison with the original.16

Louise Bourgeois left behind so much—artworks, diaries, interviews—and in all of it she was deeply reflective. She strove to be transparent. Frémon’s portrait, although beautifully written, doesn’t help us to see Bourgeois any more clearly than she endeavored to see herself.17