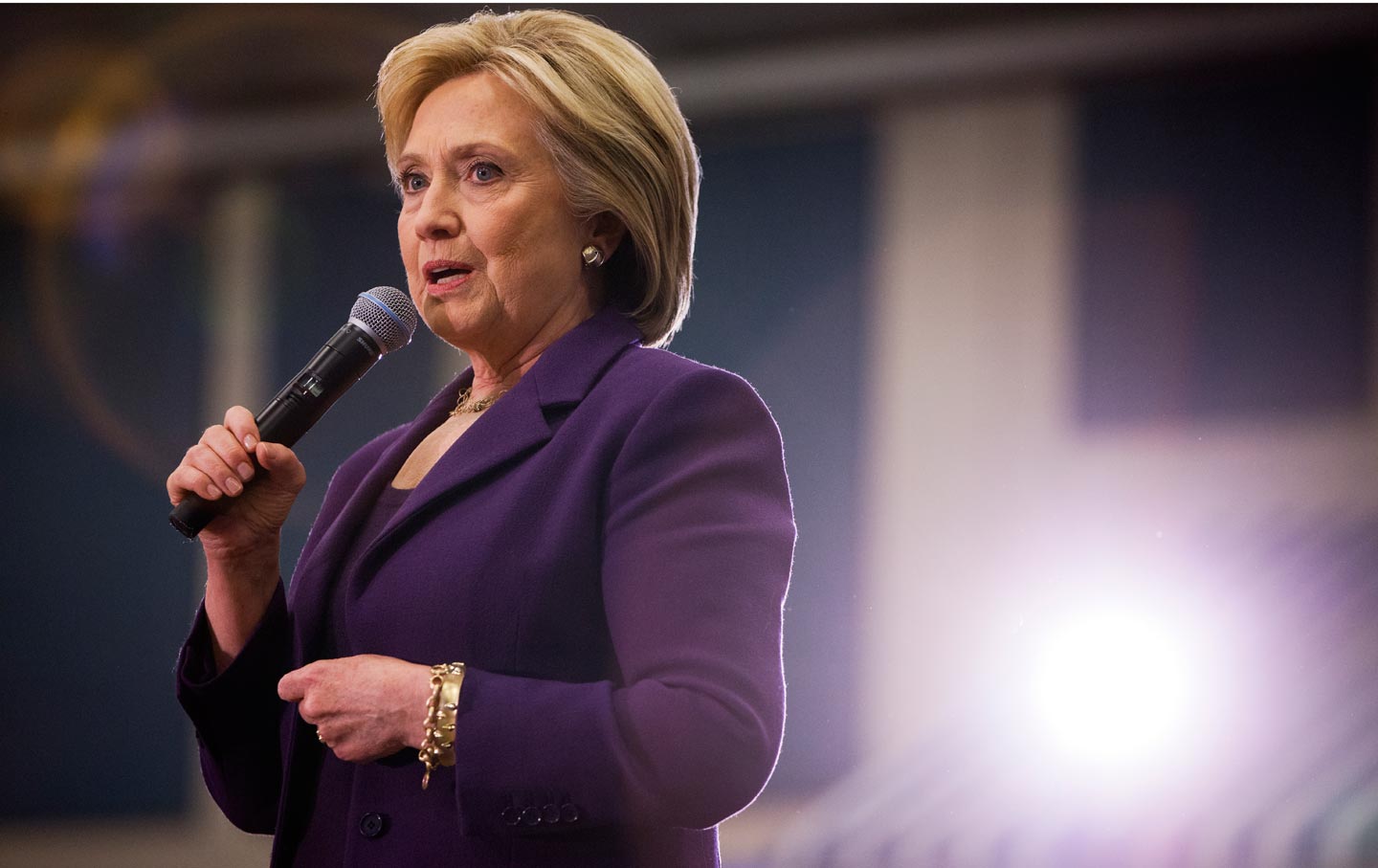 Is it wrong for women Democrats to want to vote for a woman Democrat? In primaries, I’ve always voted for the candidate I thought was more progressive, regardless of sex. In New York’s 1992 Senate primary, I voted for Bob Abrams over Liz Holtzman or Geraldine Ferraro. In 2008, I supported Barack Obama over Hillary Clinton. In 2013, I voted for Bill de Blasio over Christine Quinn for New York City mayor. Way back in the distant past, there were times that I didn’t support a woman Democrat in the general election energetically, even though I voted for her, because she wasn’t left enough for me. At the time, those votes looked high-minded and principled and based on a careful examination of the issues and the candidates’ records, but I wonder if I didn’t outsmart myself. Abrams was a terrible campaigner and lost to the dreadful Alfonse D’Amato; Ferraro, a more mainstream Democrat with a vibrant personality, probably would have won. Yes, Ferraro supported the death penalty—but should that have been the litmus test for a senator? More than the fact that Ferraro was a solid, experienced feminist—the first woman vice-presidential nominee—and the Senate was 98 percent male at the time? And if not Ferraro, why didn’t I choose Holtzman, a hero of the Watergate hearings? She attacked Ferraro over her husband’s business dealings in a way that seemed desperate and unfair—but so, if less loudly, did Abrams.

In election after election, I’ve always had a reason why, in that particular case, the man was better than the woman.

Moving on, I tepidly supported John Edwards in 2008 because he campaigned on the issue of poverty despite being an obvious phony, and then backed Obama even though he gave plenty of loud hints that he wasn’t as progressive as the halo around him suggested. (He said he’d bomb Al Qaeda inside Pakistan, for example, and rejected the individual mandate in health insurance, which Clinton and Edwards both rightly said was essential.) I even signed a letter circulated by the great historian Linda Gordon called “New York Feminists for Peace and Barack Obama.” I’m kind of embarrassed by that now. I don’t regret my vote for Obama—unlike Bernie Sanders, I think the Affordable Care Act was a huge achievement—but was he, on balance, a better president than Hillary would have been? Or even much different?

For more from The Nation on Hillary Clinton, check out Who Is Hillary Clinton? Two Decades of Answers From the Left, an ebook and paperback original by eBookNation in partnership with IB Tauris.

As for the New York City mayoral primary, if I had a do-over, I would stick with de Blasio over Quinn. She opposed paid sick leave, he supported it, and now we have it. But over my 40-odd years of casting ballots, if I had always voted for the woman in a Democratic race—“voted my vagina,” in the unlovely phrase now aimed at Hillary’s female supporters—I don’t think I would’ve done worse than I did by choosing the candidate I believed was “the best” on the issues. Looking back, I almost always had a compelling reason why, in that particular case, the man was better than the woman, but the reasons were always different. (The one exception is Zephyr Teachout, the brilliant and energetic law professor and activist whom I voted for in her 2014 primary race against New York Governor Andrew Cuomo.) The one thing they had in common was that they were more important to me than the simple, brute fact of women being underrepresented at every level of government: 19 percent of Congress, 24 percent of state legislators, a pathetic 12 percent of governors, and, of course, 0 percent of presidents and the major parties’ presidential nominees. I factored all of that right out of the equation, and I did it when women officeholders were even rarer than they are now.

As so often happens, I have met the enemy and it is me.

I’ve taken some flak for supporting Hillary Clinton, and that’s fine. It’s good that passions are strong. But the extraordinary hostility to the mere notion of women putting a collective thumb on the scale for a woman—not Sarah Palin, but a smart and highly qualified liberal Democrat—got me thinking. After all, it’s an accepted fact of American political life that people often vote their ethnicity or race or geography. For decades, New York City politics was organized as Irish, Italian, and Jewish voting blocs electing their own if they could; for the top city jobs, it was de rigueur to visit the “three Is” (Ireland, Italy, and Israel). Boston, Chicago, and many other cities were organized along similar lines. That system may be fading, but not because city dwellers have been persuaded that it’s selfish and narrow to vote for “one of their own.” Ethnic and racial feelings are alive and well in presidential politics today: It is assumed that there’s a Latino vote, and there’s been much speculation whether Marco Rubio—whose election would be of no practical benefit to Latinos whatsoever—could win a good share of it. Nobody says, “How short-sighted of Latinos to consider ethnicity in casting their ballot.” Similarly, only racists criticize black people for their near-unanimous support for Barack Obama. And if he hasn’t done a lot for them? That wasn’t the only reason that he got African Americans’ vote. The sheer fact of a black president is an enormous thing, and not just for black people. That’s why elderly ladies in Harlem are still wearing their Obama buttons eight years later.

Why should women be different? I want to tear my hair out when women say they don’t support Hillary because she’s “not likable” or “too ambitious” or “too stiff.” Ladies, you’re not voting for a best friend! Choose Bernie if you like—I won’t say a word against him. But don’t reject the first woman in history who could win the White House because she doesn’t fit your notion of how women should behave. Men put a thumb on the scale for men all the time: It’s called being “gender neutral” while defining leadership in male terms. (Can you imagine a 74-year-old democratic socialist named Bernice Sanders making a run like Bernie? The jokes write themselves.) And overt misogyny still exists. You’ll never persuade me that “Bernie bros”—the men who harass female Hillary supporters with patronizing, insulting, and sometimes-obscene tweets and posts—are just Internet will-o’-the-wisps. But if you want hard numbers, how about this: According to Gallup, 8 percent of people say they would never vote for a qualified woman for president. That’s nearly one in 12 voters. But if one in 12 female primary voters is choosing Hillary just because she’s a woman—and not also because she’s experienced, super-smart, shares their values, and looks more likely to win the general—I would be surprised.

Twenty years ago, I was very critical of Hillary in this column, lambasting her book It Takes a Village for its namby-pamby, moralistic approach to poverty—and Hillary herself, for standing by while Bill Clinton was reforming welfare. Now I wonder why her book was the only politician’s book I have ever written about—and she was just a first lady! And I ask myself why, given that welfare reform is being hurled at Hillary’s supporters as sufficient reason to oppose her now, there’s little pressure on Bernie to call for restoring those benefits?

On February 1, Hillary became the first woman in history to win the Iowa primary. The media barely noticed that. Maybe I’ll go back to voting for men when women are 51 percent of the government.

Editor’s Note: Katha Pollitt at first neglected to consider her vote for Zephyr Teachout in the 2014 gubernatorial primary race against Andrew Cuomo. The article has been updated to reflect that vote.