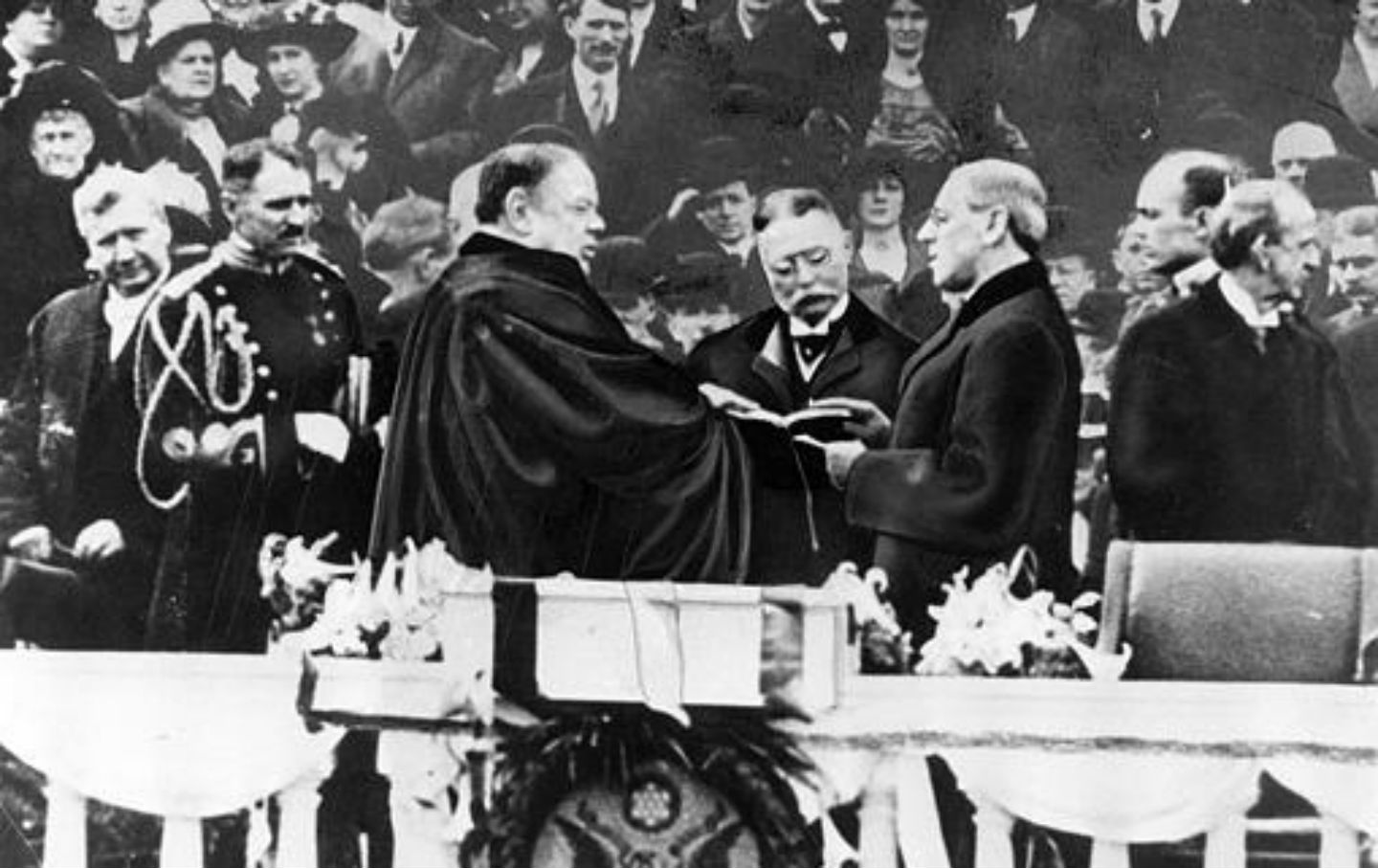 Woodrow Wilson being sworn into office during his first term, starting in 1913. (Wikimedia Commons)

In the Nation in 1885, the prominent biographer Gamaliel Bradford—descended from the Governor William Bradford of Plymouth Colony, the sixth of ultimately seven consecutive Gamaliel Bradfords in an unbroken line—reviewed Wilson’s tract, Congressional Government: “We have no hesitation in saying that this is one of the most important books, dealing with political subjects, which have ever issued from the American press.” After Wilson was elected president on this day in 1912, The Nation wrote in an editorial:

Though Gov. Wilson’s election to the Presidency was expected by all men able to view the political situation coolly, the extent of his victory impresses the imagination. Let no man say that his success was undeserved. He had a magnificent opportunity, but he seized it magnificently. Deliberately marking out the lines of his campaign, he clung to them tenaciously, and by the dignity and force of his speeches, the sagacity of his judgment, and the manliness of his bearing, held his party together in the face of a formidable raider, and won the support of thousands of Republicans and independents. This is a shining achievement….

But with the same vote by which Gov. Wilson’s wonderful success has been attained, solemn warning has been given. It is not an hour for foolish elation. No man perceives this more clearly than Woodrow Wilson. His earliest words are all of deep responsibility, and of the sobering which such a victory as his carries with it. We may be sure that no eye is keener than his to read the signs in the political heavens. He sees the breaking up of the great deep in this election. Party allegiance was trampled upon. In the casting of ballots impatience visibly went with hope, imperious demands for the future alongside condign punishment for the past. The vast and fluctuating electorate stands ready to inflict its dire penalties upon Democratic failure. Gov. Wilson must be fully aware of all this. He must understand perfectly, for example, what courage and strength of will and calmness under obloquy he will need in order to prevent the party victory from being transmuted into a swinish rush for spoils. This would infallibly lead down a steep place into the sea.