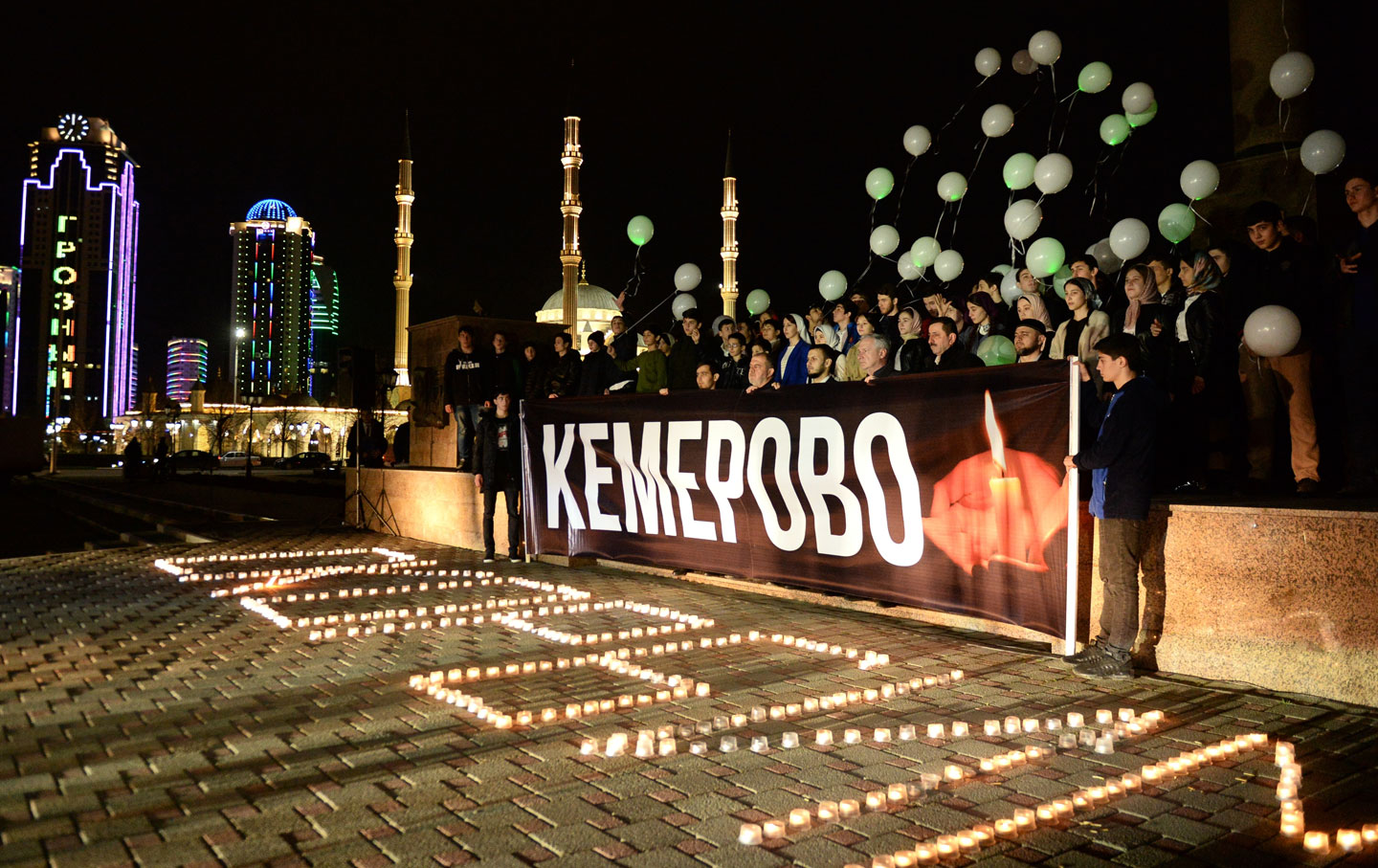 Twenty-five years ago, young Russian journalists created an independent newspaper to tell the truth about the past and present without censorship or fear. Since then, Novaya Gazeta has remained the chief outpost of freedom of speech, courageous investigations, and protection of human rights in Russia.

The terrible fire in a Kemerovo mall in March that took dozens of lives, half of them children, stunned the nation. The disaster, which happened almost immediately after the presidential elections, the cynicism of officials who had more sympathy for the leadership of the Siberian region and the country than for the victims’ families, and the belated reaction from Moscow brought people out into the streets of Kemerovo and dozens of other cities in Russia. The demonstrations of solidarity with the mall-fire victims in Kemerovo blended with the protests against toxic dumps in the Moscow region and in Yekaterinburg with the rallies against the decision to abolish mayoral elections.

State propaganda immediately accused the protesters of “using blood for PR” and supporting destructive forces and criticized the independent journalists writing about the protests for destabilizing the state. Parliamentarians proposed legislation to limit reporting on the tragedy. Novaya Gazeta published an analysis of the practice of consistent “tightening of the screws” after every fatal calamity—be it the sunken Kursk submarine, the hostage taking in the Moscow theater on Dubrovka or the school in Beslan, or the flooding in Krymsk, in the Krasnodar region. Novaya’s investigations report on what the official press overlooks, see every incident in context, and show the hidden springs of events. They are the evidence of the astonishing fearlessness to tell the truth about everything and everyone, including the highest leaders of the land and their closest circles.

Six journalists paid with their lives. Igor Domnikov, head of the special-projects department, was killed in 2000. Yuri Shchekochikhin, a famous investigative reporter who was first to write about the mafia in the USSR back in 1988, in Gorbachev’s time, died under mysterious circumstances in 2003 in the midst of his series on money laundering by the Russian elite. Anna Politkovskaya, who revealed the truth about events in Chechnya to the country and the world, was shot to death in 2006. In 2009, Natalya Estemirova, Stanislav Markelov, and Anastasia Baburova were killed. Even for Russia, six killed at the same newspaper is a horrible record. Even more horribly, fewer than half of the killings are solved. The killers of Markelov and Baburova have been sentenced. Politkovskaya’s family and colleagues believe that the people who committed her murder were only pawns and the contractor has not been not named. The rest of the deaths have not been investigated fully. The people who regularly threaten journalists and declared a fatwa against Novaya for its publications in spring 2017 about the persecution of gays in Chechnya have not been punished. Many Western analysts place the responsibility for these crimes on Putin. But the cause is more likely the system of mutual responsibility and the culture of impunity that began to form before Putin, in the late 1990s, and has become universal in recent years in Russia.

Novaya Gazeta holds another record, as well: for the number of prizes and professional awards, including a recent Pulitzer Prize for its part in the global investigative project on the Panama Papers. There are no vital issues, past and present, that the newspaper did not cover. Its “Truth of the Gulag” series is almost the only project in the Russian press that continues to research the history of repressions in the USSR and reminds us of the danger of a resurrection of totalitarianism. Working with the Memorial Society in raising the monument to the Gulag victims in Moscow in October 2017 and participation in human rights projects is particularly important today, with the threat of a resurgent Stalinism verging on a justification of the repressions has appeared in Russia.

It is an amazing newspaper that, logically, should not exist in contemporary Russia. It is the object of hatred and constant irritation for corrupt politicians and Stalinists. It is a sail of hope for those who believe in the future of Russia, free of arbitrary rule, lies, and contempt for human beings. Dmitri Muratov, leader and “face of the newspaper” for almost 25 years, is an amazing editor in chief. Not only because he is almost the only person who continues to publish daring investigative reports on corruption, including in Putin’s inner circle. He is not afraid to criticize decisions others are afraid to discuss—the Crimea, Donbass, Syria, growing poverty, and the reduction of civil rights inside the country. Not only because he has maintained his independence and serves his readers, not the regime or money. The most amazing thing is that Muratov has managed to preserve his boyish drive and daring and his absolute faith in his team.

Twenty-five years ago, soon after the official ban on censorship and the establishment of freedom of speech in Russia, a few young journalists at Komsomolskaya Pravda (at the time a bright, liberal publication), including Dmitri Muratov and the present editor, Sergei Kozheurov, decided to make the kind of newspaper that they and their teachers, “children of the Khrushchev Thaw,” had dreamed of. A newspaper that would combine the main features of journalism that developed over centuries of resisting tyranny—sympathy for the little man, a demand for justice for all, a belief in the triumph of good—and also at the same time the possibility for straight talk about politics newly acquired in the perestroika period. Many journalists in the mid-1990s started up their own publications. Almost all of them quickly went out of business and the remaining ones lost real independence. Novaya continues to be the “guard dog” of Russian democracy.

In their special anniversary issue, the editors wrote: “What will happen to the world? We can guess. What will happen to the country? We don’t know that, either. What will happen to us (the readers and the newspaper)? Here, there is clarity. As long as the newspaper is published, it will retain its signature and approach. In outline: the basis of the profession is talent. The rights of the individual are greater than the rights of the state. Obscurantism is a crime. Corruption is apartheid. ‘Do not hit or lick below the belt’ (Yuri Shchekochikhin). We will not betray these principles.”

Novaya has always been an important and personal project for its creators, contributors, and readers, which allowed them to participate directly in the country’s transformation. It is a personal choice for people who do not wish to be extras in someone else’s game but want to chose their present and future independently. Young journalists and readers are continually drawn to the paper. Its new website is read regularly by 5 million people a month and seen by 18 million. The numbers keep going up. Most of the people working at the newspaper are the same age as, or a few years older than, the publication. It is the future of independent Russian journalism.

The anniversary party at the Arbat Club did not have stuffy formal speeches or a VIP zone. In his three-minute welcome, Muratov said there are villains who start wars, steal from their people, and assert obscurantism. And there are people who resist that—journalists, the characters they write about, and the readers: the people gathered in that room. Mikhail Gorbachev sat at a table with young journalists and instead of making a speech sang a romance set to a Lermontov poem. The newspaper’s heroes, Russian rock stars, and actors from Moscow theaters performed works dedicated to the newspaper, and Novaya’s most famous writers sang along with the youngest and newest recruits. It was impossible not to believe that these people, all of them together with their readers, would win. Somebody compared Novaya’s staff to the early Christians, someone else to the residents of Noah’s ark. To me, they are the crew of a ship intrepidly headed into the future.