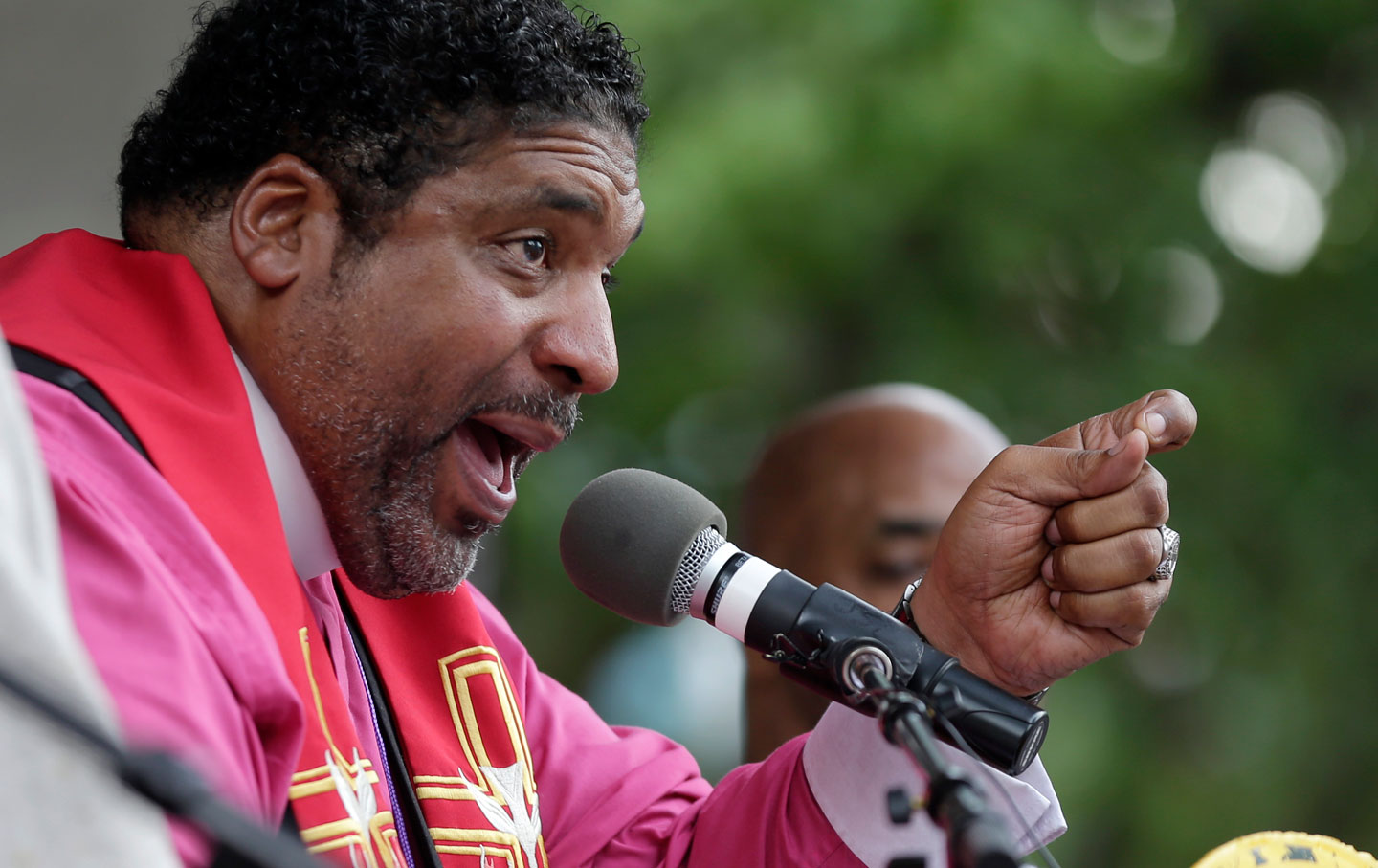 In his last sermon, on the evening before he was shot down outside the Lorraine Motel in Memphis, Tennessee, Dr. Martin Luther King Jr. offered a conclusion that serves well as starting point for 2018. After declaring that America was sick in 1968, facing troubling times, King made this resolution:

Now, let me say as I move to my conclusion that we’ve got to give ourselves to this struggle until the end. Nothing would be more tragic than to stop at this point in Memphis. We’ve got to see it through. And when we have our march, you need to be there. If it means leaving work, if it means leaving school—be there. Be concerned about your brother. You may not be on strike. But either we go up together, or we go down together.

King did not live to see another 24 hours of that pivotal year in American history, but 50 years later we face a similar collective crisis as we begin 2018. Extremists who’ve hijacked the Republican Party worked in concert with a charlatan to deconstruct the federal government, but a resistance made itself public in 2017, making clear that we are still the majority in this nation. Congress and many of our state legislatures refuse to represent the will of the majority. In the face of this basic subversion of democracy, we do well to remember that “either we go up together, or we go down together.” King’s assessment is more crucial than ever: Nothing would be more tragic than to turn back now.

Fifty years after Dr. King and many others launched a Poor People’s Campaign to demand a Marshall Plan for America’s poor, inequality in our nation has reached extremes we have not seen since the Gilded Age. As the Dow climbs and the wealthiest Americans get a massive tax break, 15 million more Americans are poor today than in 1968. In the same time period, the rate of extreme poverty has nearly doubled. Because of the systemic racism of voter suppression, which has been implemented in 23 of the nation’s poorest states since 2010, our political system is held captive by extremists who deny workers health care and a living wage, undermine the equal-protection clause of the constitution, attack public education, and encourage poor white people to blame people of color and immigrants for their problems. All the while, more and more of our collective resources are dedicated to a war without end.

This is the moral crisis that produced the Trump presidency. Amid daily news about drama in the West Wing, we must not lose sight of the long-term effort to undermine the federal courts, which continues beneath the radar. Any political movement as unpopular as the current administration cannot endure very long, but it is already having an impact on the courts that will last for decades. Remember: Federal judicial appointments are for life. In his first year in office, Trump appointed more judges to the federal bench than his three predecessors combined did in the same time frame.

We can see the consequences of these appointments by taking a closer look at one particular nominee, who was not confirmed in 2017 but has already been renominated this year. Thomas Farr, who worked for decades as a lawyer for the Jesse Helms machine in my home state of North Carolina, more recently spent four years defending the monster voter-suppression law that was signed by then–Governor of North Carolina Pat McCrory in 2013.

The North Carolina NAACP sued McCrory in federal court as soon as the bill was passed, only hours after the Shelby decision gutted the pre-clearance requirements of the Voting Rights Act. We knew that the bill was not only intended to suppress votes but would also be racially discriminatory in its impact, making it more difficult for poor and black voters in North Carolina to assert their will at the ballot box. McCrory’s team knew whom to go to in order to defend the tactics of James Crow, Esquire. They hired Thomas Farr as lead attorney to defend their subversion of democracy.

After receiving $6 million of taxpayer money for his services, Farr ultimately lost at the Supreme Court, where even Justice Clarence Thomas voted to affirm the Fourth Circuit court’s assessment that the law Farr was defending targeted African-Americans “with almost surgical precision.” Lacking a higher court to appeal to, extremists who fear a loss of power with demographic changes are attempting to subvert the balance of power by stacking the courts with people like Thomas Farr. Having lost a fair fight, they are willing to cheat. So it is imperative that all who believe in the checks and balances of impartial courts refuse to back down on this issue of judicial nominations. We must not fail to defend the battles we’ve already won. Nothing would be more tragic than to turn back now.

People with deep moral convictions about justice, love, and truth must in this moment become even more conspicuous in the public square. So-called “white evangelicals” and their Christian nationalism have become the apologists and enablers of political extremism. Their voices are so loud when joining the course of those who hate gay people, women, and brown and black-skinned immigrants, but so quiet on issues of poverty, systemic racism, ecological devastation, and the war economy. This is a form of modern heresy and theological malpractice, taught all over the country.

In this moment when moral dissent is needed to once again challenge the immoral hijacking of moral traditions, nothing would be more tragic than to turn back now.

For motivation, we can turn our attention to the political consequences of voter suppression and racial gerrymandering in the South. Anyone who watched the Senate race in Alabama closely observed that Doug Jones, the Democratic candidate who won the seat by 1.6 points, lost five of six congressional districts. In a nutshell, that’s the consequence of gerrymandering. While a majority of people in a Southern state like Alabama now prefer someone like Jones to someone like Roy Moore, five in six of their congressional representatives still pursue the policy agenda of extremists like Roy Moore.

Case in point: The tax-reform bill that Republicans gleefully celebrated at the end of 2017 will hurt Southern states like Alabama the worst because Alabama has some of the highest poverty rates in the country and depends on large amounts of federal money to provide basic services to its poor people, the majority of whom are white. Congress made a decision to invest $1.5 trillion in corporations and wealthy elites rather than anti-poverty programs with nearly full support of Alabama delegation to Congress. Representatives who were elected through racist voter suppression and redistricting used their ill-gotten power to hurt the poor people who often voted for them because they were misled by race-baiting antics. What’s more, they continue to do it in the name of the God who said, “I was hungry and fed me not; I was thirsty and you gave me nothing to drink.”

It’s an old story in the South, but nothing would be more tragic than to turn back now because we saw clearly in statewide races from Virginia to Alabama in 2017 that the majority of people see through the old con and want to be represented by more progressive candidates. This is why we must organize across the country, but especially in the South, building new fusion coalitions for the common good. It is why I have dedicated myself to a new Poor People’s Campaign: A National Call for Moral Revival that is going deep into Southern communities and reclaiming the moral narrative that was bought by the religious right in the 20th century.

In 2018, we are determined to see the South rise again—not in the redemption that white supremacists have long awaited with Confederate flags, but in the future that George White, the last African-American representative to Congress during Reconstruction, foresaw when he said, “This may be the Negro’s farewell to Congress, but Phoenix-like he will rise up some day and come again.”

Fusion politics has never been solely about black representation, but about coalitions in which black and brown people vote with white neighbors in the South who see that they have more in common than racism would have them believe. This is why the Senate seat in Alabama was more than a fluke. We must recall that the NAACP Legal Defense Fund is still fighting Alabama’s voter suppression in federal court. Doug Jones won Alabama with James Crow, Esquire, in control of the election boards. If a Senate seat can flip under those conditions, then what might be possible of the Voting Rights Act were restored by Congress, if automatic voter registration were instituted at the state level, and if we were able to mount a mass voter education/mobilization campaign, resulting in record voter participation across the South? What felt like an exception to the political rule in 2017 could be the new reality in 2018: progressive candidates could run and win across the South, and Alabama would no longer be an anomaly.

Nothing would be more tragic than to turn back now, because we have seen that when we stand up and fight back the seemingly indomitable giants of white supremacy can come down. In 2017, we not only won a four-year struggle against voter suppression, but also a six-year fight against racial gerrymandering. In a unanimous decision, the US Supreme Court upheld a ruling that ultimately required a special master to redraw voting districts in North Carolina. With these new lines in place for the first time in 2018, North Carolina has the opportunity for the first time in six years to see our voters choose their politicians rather than the politicians choosing their voters. Having restored a semblance of democratic process, we can now take the resistance to the ballot box, mobilizing the same fusion coalition that has fought in the streets, in the courts, and in statewide races to reconstitute our legislature and congressional delegation. If this kind of shift can happen in North Carolina, then it can happen across the South. And when we change the South, we will shift the power balance in this nation.

Nothing would be more tragic than to turn back now, because we have seen the real possibility that, in the middle of this dark night of the American story, a Third Reconstruction is possible. “We made the world we are living in,” James Baldwin said, “and we have to make it over.” Imperfect though we are, we can do this work together in 2018 and move forward toward the more perfect union of our common creed.