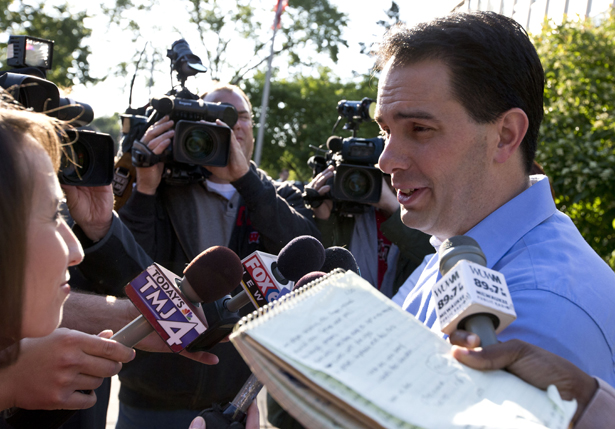 When Mitt Romney, who is anything but a fresh face in the Republican hierarchy decided to forgo a third run for the presidency, he announced, “I believe that one of our next generation of Republican leaders—one who may not be as well-known as I am today, one who has not yet taken their message across the country, one who is just getting started—may well emerge as being better able to defeat the Democrat nominee. In fact, I expect and hope that to be the case.”

Full-on Republican presidential contender Scott Walker just presumed that the man who Republican primary voters rejected in 2008, and who the rest of the American electorate rejected in 2012, was talking about a certain governor of Wisconsin.

Never mind that, in his book, Unintimidated: A Governor’s Story and a Nation’s Challenge, Walker ripped the party’s 2012 campaign—and, by extension, its nominee—for doing a “lousy job of presenting a positive vision of free market solutions to our nation’s problems in a way that is relevant to people’s lives.” Never mind that Walker griped just days before Romney quit the race that a 2016 run by the 2012 loser would be “pretty hard” to justify. Never mind that Walker, one of the most relentlessly negative campaigners in contemporary American politics, was more than ready to beat up on Romney if that was necessary to advance his own 2016 run. With Romney’s decision to sideline himself, Walker chirped, “I would love to have his endorsement.”

Walker actually went a step further, going on Twitter to suggest that he was precisely the sort of “next generation” leader Romney was referring to. “Had a great conversation w/ @MittRomney,” Walker announced. “He’s a good man. Thanked him for his interest in opening the door for fresh leadership in America.”

There’s only one problem with this calculus.

The governor is a political careerist who has sought office—as a winner and loser—more times that Mitt Romney, Jeb Bush, Rand Paul and Ted Cruz combined.

In a permanent campaign that began a quarter century ago—when he quit college and launched a losing state legislative campaign against future US Congresswoman Gwen Moore—Walker has run 24 primary and general election races. That doesn’t include a 2006 bid for the Republican gubernatorial nomination in Wisconsin, which he scrapped after national party officials elbowed him aside in favor of another candidate, or his all-but announced 2016 presidential run.

Hyper-ambitious yet strikingly disciplined, Walker has used every office he has ever held as a platform from which to run for the next. Even when scandals have led to the arrests, indictments and convictions of campaign donors, campaign aides and official staffers, Walker has maintained a steady focus on climbing the political ladder that is perhaps most comparable to that of former President Bill Clinton.

As a state legislator, Walker backed an effort to recall the sitting Milwaukee County Executive and then jumped into the race for that job. After winning his first full term as county executive in 2004, Walker immediately began running for the 2006 Republican gubernatorial nomination.

When that run was scuttled, Walker sought and secured a second term as county executive in 2008, only to immediately begin running for the 2010 Republican gubernatorial nomination. After securing the governorship, Walker quickly began positioning himself on the national stage—not just by picking high-profile fights with Wisconsin unions that would, ultimately, lead to a rare gubernatorial recall challenge but by jetting around the country to court the wealthiest campaign donors and to appear in the first caucus state of Iowa and the first primary state of New Hampshire.

Before his 2014 reelection race was complete, Walker was already visiting Las Vegas with other 2016 Republican presidential prospects seeking the favor of billionaire campaign donor Sheldon Adelson. Despite the fact that he said during that 2014 race that he intended to serve the full term he was seeking—“I want to be governor and that’s the only thing I’ve been focused on,” “My plan—if the voters approve—is to serve as governor for the next four years”—Walker was already actively preparing a 2016 run. He even wrote (well, sort of wrote, with the help of a politically connected DC insider who had worked as a speechwriter for George W. Bush) an autobiography/manifesto that was so transparent in its ambition that Glenn Beck’s The Blaze described as “the archetype of a book for a future Presidential candidate (written) without ever so much as hinting as to any intent to run for presidentWalker is now well beyond the hinting stage. And they run is going well, so far, with governor beginning to climb in the polls. One survey even puts him in first place among Iowa Republicans, one point ahead of Kentucky Senator Rand Paul and further ahead of prominent prospects such as Jeb Bush and Ted Cruz and Marco Rubio. No surprise there: Walker has a lot more experience contending for public office than most of the other Republicans who are preparing to run in 2016.

It’s worth noting that, even when he was running in 1993, Walker was not considered “fresh.” When it endorsed him that year, the conservative Milwaukee Sentinel referred to Walker not as a newcomer but as what he already was decades ago: “an active Republican insider.”