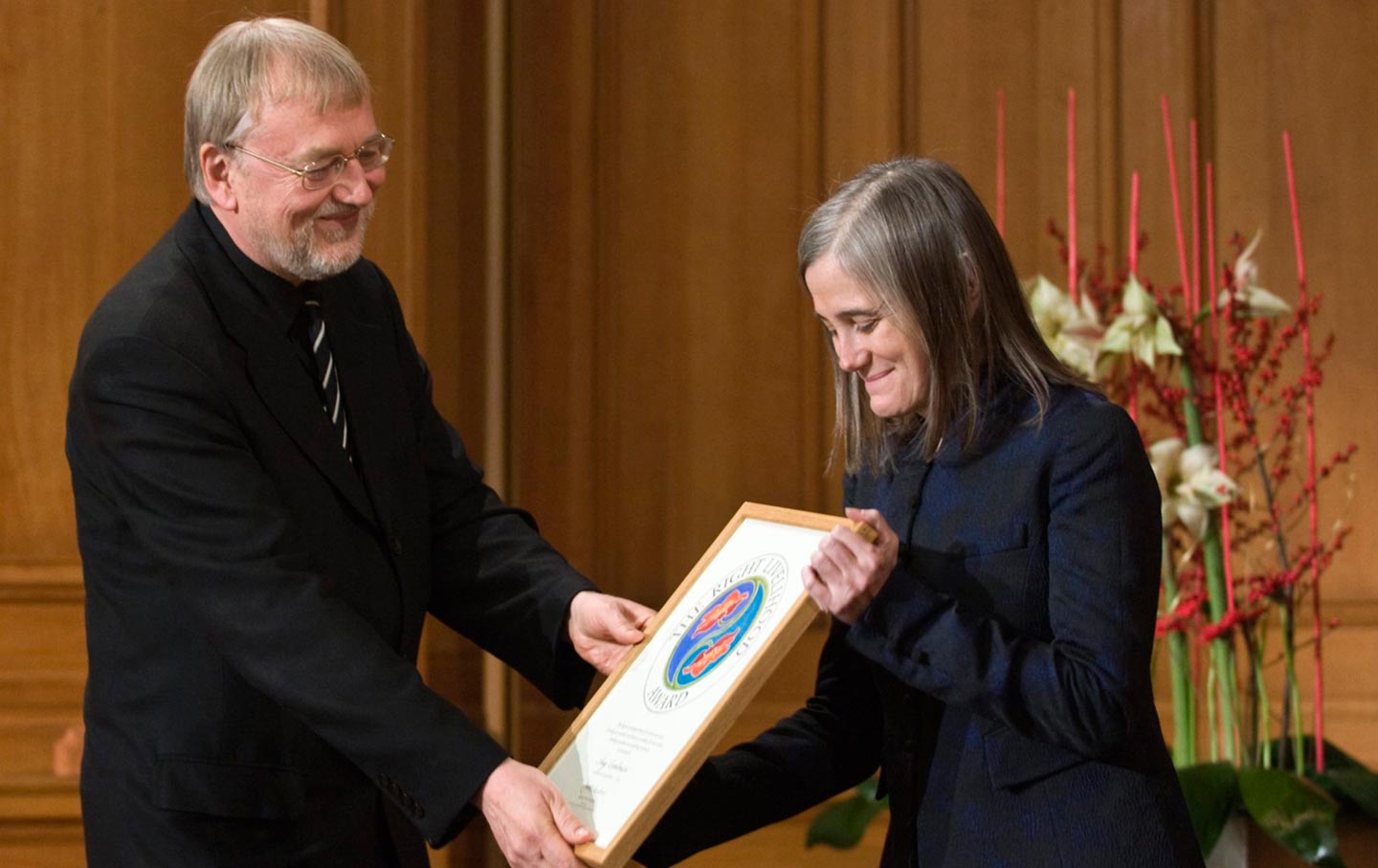 So much for the First Amendment to the Constitution of the United States.

Despite well-established freedom of the press protections that outline and guarantee the rights of reporters who cover breaking news stories—including confrontations between demonstrators and authorities—North Dakota officials have charged Democracy Now! host Amy Goodman with criminal trespassing after she documented private security personnel’s use of dogs to attack Native American foes of the Dakota Access Pipeline project.

Video footage obtained by Goodman, an internationally respected and frequently honored independent journalist, helped to alert Americans to the tactics being used to stop demonstrations against the pipeline by the Standing Rock Sioux Tribe and their allies. On Friday, the Obama administration halted work on key portions of the $3.8 billion pipeline project—recognizing concerns raised by the tribe and environmental activists.

Amy Goodman calls the the battle against the pipeline “a renewed assertion of indigenous rights and sovereignty...”

That might have been expected to temper the zeal of local officials in North Dakota’s Morton County—who issued warrants charging Green Party presidential candidate Jill Stein and her vice-presidential running mate Ajamu Baraka with criminal trespass and criminal mischief after they joined the demonstrations Tuesday. But on Saturday afternoon, North Dakota’s Dickinson Press reported that:

Authorities have issued an arrest warrant for Amy Goodman of New York for a Class B misdemeanor, according to court documents.

Goodman, a reporter for the independent news program, can be seen on news footage from Sept. 3 documenting the clash between protesters and private security personnel with guard dogs at a Dakota Access construction site, including footage showing people with bite injuries and a dog with blood on its mouth.

The video footage has been widely cited by people who have since criticized the use of dogs by the security personnel.

Goodman has been open and outspoken with regard to her reporting from North Dakota.

In a detailed account of events that took place on September 3, the day the dogs were used, Goodman and Denis Moynihan wrote that “security guards attempted to repel the land defenders, unleashing at least half a dozen vicious dogs, who bit both people and horses. One dog had blood dripping from its mouth and nose. Undeterred, the dog’s handler continued to push the dog into the crowd. The guards pepper-sprayed the protesters, punched and tackled them. Vicious dogs like mastiffs have been used to attack indigenous peoples in the Americas since the time of Christopher Columbus and the Spanish conquistadors who followed him. In the end, the violent Dakota Access guards were forced back.”

Goodman’s accounts helped to raise awareness of the pipeline fight at a critical stage. And her assessment of the struggle has helped to put it in historical and contemporary context. “The battle against the Dakota Access Pipeline is being waged as a renewed assertion of indigenous rights and sovereignty, as a fight to protect clean water, but, most importantly, as part of the global struggle to combat climate change and break from dependence on fossil fuels,” Goodman and Moynihan wrote. “At the Sacred Stone, Red Warrior and other camps at the confluence of the Missouri and Cannonball rivers, the protectors are there to stay, and their numbers are growing daily.”

That is a fair assessment. It is also fair to say that an arrest warrant will not keep Amy Goodman from speaking up.

“This is unacceptable violation of freedom of the press,” Goodman said Saturday. “I was doing my job by covering pipeline guards unleashing dogs and pepper spray on Native American protesters.”

Her assertion is backed up by a constitutional amendment that reads: “Congress shall make no law respecting an establishment of religion, or prohibiting the free exercise thereof; or abridging the freedom of speech, or of the press; or the right of the people peaceably to assemble, and to petition the Government for a redress of grievances.”

That amendment applies everywhere, and to officials at every level of government—even those serving in Morton County, North Dakota.