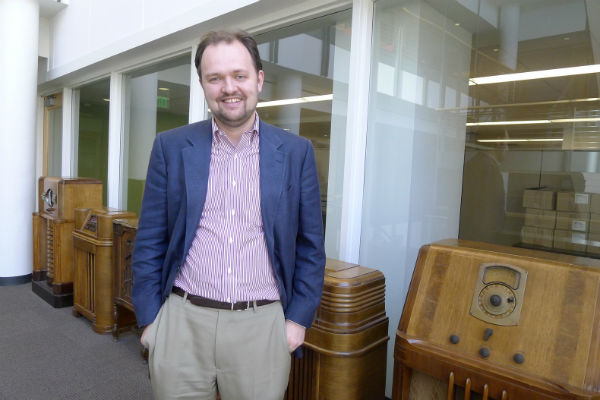 Ross Douthat, columnist at The New York Times (photo courtesy of On Being, CC 2.0)

Ross Douthat thinks that liberals are showing bad faith by refusing to concede that restricting abortion would shore up the two-parent family. In his latest column, he writes:

When liberals claim social conservatives don’t have any policy ideas for marriage promotion, then, they’re somewhat self-deceived. A sustained conservative shift on abortion policy and marriage law probably would, over the long term, increase the rate at which couples take vows and stay together, and improve the life prospects of their children. So one hypothetical middle ground on marriage promotion might involve wage subsidies and modest limits on unilateral divorce, or a jobs program anda second-trimester abortion ban.

This is a bizarre argument. As Douthat well knows, the availability and acceptability of abortion varies widely by state, and there is an inverse relationship between abortion limitation and family stability, with socially conservative states consistently having the highest divorce rates. (They also tend to have higher teenage birth rates.) More than simple correlation is at work here—by allowing couples to postpone marriage and parenthood until they’re ready, abortion access allows for stronger families. In 2010, one prominent conservative acknowledged this, suggesting that greater family breakdown was a worthwhile price to pay for fewer abortions:

[I]t isn’t just contraception that delays childbearing in liberal states, and it isn’t just a foolish devotion to abstinence education that leads to teen births and hasty marriages in conservative America. It’s also a matter of how plausible an option abortion seems, both morally and practically, depending on who and where you are.

Whether it’s attainable for most Americans or not, the “blue family” model clearly works: it leads to marital success and material prosperity, and it’s well suited to our mobile, globalized society.

By comparison, the “red family” model can look dysfunctional—an uneasy mix of rigor and permissiveness, whose ideals don’t always match up with the facts of contemporary life.

But it reflects something else as well: an attempt, however compromised, to navigate post-sexual revolution America without relying on abortion.

The conservative who wrote this was Ross Douthat.

It’s certainly true, as he argues in his most recent column, that legalized abortion undermined the norm that out-of-wedlock pregnancies would lead to shotgun weddings. He cites a 1996 Brookings Institute paper by George Akerlof and Janet Yellen (yes, that Janet Yellen) making a convincing case for the link between the abortion and contraceptive revolutions and the growth of unmarried parenthood. Wrote Akerlof and Yellen:

What links liberalized contraception and abortion with the declining shotgun marriage rate? Before 1970, the stigma of unwed motherhood was so great that few women were willing to bear children outside of marriage. The only circumstance that would cause women to engage in sexual activity was a promise of marriage in the event of pregnancy. Men were willing to make (and keep) that promise for they knew that in leaving one woman they would be unlikely to find another who would not make the same demand. Even women who would be willing to bear children out-of-wedlock could demand a promise of marriage in the event of pregnancy.

To be clear, even if the reproductive genie could be forced back into its bottle, it would be immoral to impose a regime of forced pregnancy on American women, whatever the putative social benefits. But the fact is, we know from real world experience that in the contemporary United States, restrictive abortion policies now undermine marriage.

Douthat doesn’t mention that Akerlof and Yellen came to the same conclusion. They wrote:

Attempts to turn the technological clock backwards by denying women access to abortion and contraception are probably not possible. Even if such attempts were possible, they would now be counterproductive. In addition to reducing the well-being of women who use the technology, such measures would lead to yet greater poverty. With sexual abstinence rare and the stigma of out-of-wedlock motherhood small, denying women access to abortion and contraception would only increase the number of children born out-of-wedlock and reared in impoverished single-parent families.

If Douthat has evidence that they were wrong, I’d love to see it.