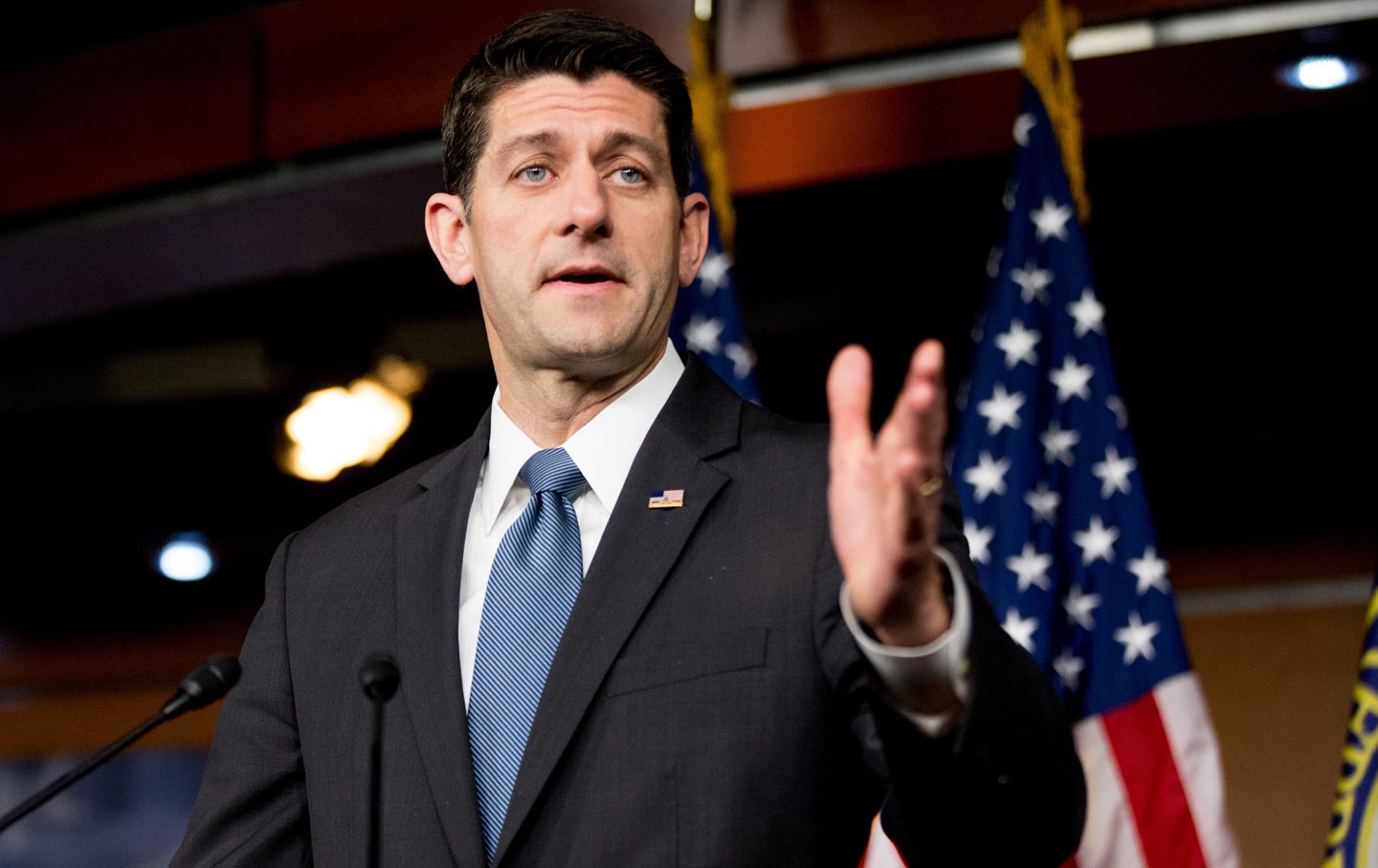 That’s an inconvenient truth that congressional Republicans refuse to recognize. Led by House Speaker Paul Ryan (in his current role and in previous legislative incarnations), they have promoted the worst sort of austerity economics (tax breaks for billionaires in combination with proposals to undermine Social Security, Medicare, Medicaid, food stamps, and unemployment benefits) and the worst sort of austerity thinking (the cruel fantasy that says redistributing wealth upward will somehow help those at the bottom).

Yet the folly of austerity is confirmed each day—in states governed by Republican governors who seek to balance budgets by assaulting public employees, public education, and public services, and in countries around the world where delusional politicians have tried to cut their way to prosperity.

Crowds are in the streets, marching in the United States and abroad, against austerity policies and in favor of a pivot toward strategies that revive economies by investing in job creation, community development, and sustainable approaches to growth.

They are marching for “$15 and a Union” in Peoria, and for labor rights in Paris.

And they are marching in San Juan for survival.

While Washington fiddles, Puerto Rico’s economy is crashing and burning. A debt crisis—with roots in a severe economic downturn—has, in the words of Treasury Secretary Jacob Lew, “already harmed the health, safety and welfare of the 3.5 million Americans living in Puerto Rico.” Yet, instead of responding with an eye toward renewing and strengthening the economy of the commonwealth, Ryan and congressional Republicans keep coming up with convoluted schemes to punish Puerto Ricans.

Now they have taken a turn toward full-on, relentless, and doomed-to-failure austerity.

Ryan and his fellow Republicans have been cobbling together a legislative proposal to create an unelected control board that could trump the will of the people of Puerto Rico and impose draconian cuts. That’s a recipe for economic and social turmoil.

Governor Padilla says the House proposal is “not consistent with our country’s basic democratic principles.”

“To those who think they can sacrifice democracy to obtain economic stability,” warns Puerto Rico’s Senate President Eduardo Bhatia. “Know that in the end you’ll have neither.”

Vermont Senator Bernie Sanders—recently returned from a presidential-campaign swing that drew crowds in San Juan—decries the control-board scheme as “a move in exactly the wrong direction.”

“This undemocratic board would have the power to slash pensions, cut education and health care, and increase taxes on working families in Puerto Rico. That is unacceptable,” says Sanders, who complains that this legislation is designed to “slash the minimum wage in Puerto Rico and exempt workers in Puerto Rico from President Obama’s overtime protections.”

The White House complains about the “meanspirited policy-making” of the Republicans who have advanced this measure. Yet aides say the president (and many congressional Democrats) could accept the plan if there is no other option for assisting Puerto Rico.

The problem is that there are components of the proposal that are worse than “meanspirited.” They deny the people of Puerto Rico a meaningful role in shaping a sustainable future.

Austerity schemes are, invariably, at odds with democracy. They seek to impose “fixes” on cities, counties, states, and nations rather than inviting citizens to have a say in forging equitable solutions. But this proposal is particularly egregious. Under it, Sanders notes, “Majority Leader McConnell and Speaker Ryan would be in charge of handpicking a majority of the control board’s members, while the people of Puerto Rico would be in charge of choosing none. That may make sense to the Tea Party and one of the largest trade groups representing Wall Street—groups that endorsed this legislation—but it makes absolutely no sense to me.”

It should not make sense to anyone.

The Republican proposal represents a top-down, anti-democratic approach that is designed to allow managers to exercise undo influence over the economic and political affairs of people who are already hurting. Haven’t we learned anything from the failure of Michigan Governor Rick Snyder’s “emergency manager” schemes in cities like Flint and Detroit?

The right response is for the federal government to clear the way for the restructuring of existing debt and to help stabilize healthcare and social services—steps that become all the more important as the Zika virus threat looms larger each day. There must also be investment in infrastructure programs that create jobs. Those are moves that can jump-start the economy. This is not complicated stuff. But it does require a different mindset than most Republicans, and many Democrats, bring to the challenge.

Democrats want to help Puerto Rico and so, too, do responsible Republicans. They have different views, and it is understandable that, in a time of divided governance, some compromises will be demanded. But undermining democracy—and eliminating standards that protect workers in the rest of the United States—is no compromise. It is a rejection of basic premises of an American experiment that began with a rejection of colonialism.

Puerto Rico Governor Alejandro Garcia Padilla says the House proposal, as it now stands, is “not consistent with our country’s basic democratic principles.”

Puerto Rico already suffers from a democracy deficit. People who live on the island are US citizens who cannot vote in US presidential elections or send voting representation to Congress. This is an issue that former secretary of state Hillary Clinton highlighted when she visited the island last fall. “It always struck me as so indefensible that you can’t vote for president if you live here,” she said. “But if you move to Florida—which, of course, I’m just naming a state—you can vote for president.”

In addressing the debt crisis, Clinton has argued, “We also have to step back and look hard at how Puerto Rico’s economy arrived at this dire situation. The deficit is a consequence of an economy that has lagged that of the States for decades and shrunk for eight of the last nine years. Puerto Rico needs a longer-term plan to address a declining population, eroding employment base, high utility rates and the impact of unequal federal investments. It will take tough decisions and real economic reforms.” In her September visit to San Juan, the former secretary of state declared, “I do not believe you can fix your economy through austerity alone.”

Sanders goes further, arguing that we “should recognize that the reason Puerto Rico has such unsustainable debt has everything to do with the policies of austerity and the greed of large financial institutions.” That was a message he delivered to crowds in San Juan this month, as he campaigned in anticipation of the commonwealth’s June 5 primary. And it is a message he amplified in a statement following the release of the House plan.

“The economic situation in Puerto Rico will not improve by eliminating more public schools, slashing pensions, laying off workers and allowing corporations to pay workers starvation wages by suspending the minimum wage and relaxing labor laws,” said Sanders. “Instead, Puerto Rico must be given the time it needs to grow its economy, create jobs, reduce the poverty rate and expand its tax base so that it can pay back its debt in a way that is fair and that is just.”

The senator argues, as Clinton has, for affording Puerto Rico the same bankruptcy protections that states enjoy. And he urges the Federal Reserve to take emergency action to help Puerto Rico restructure its debt.