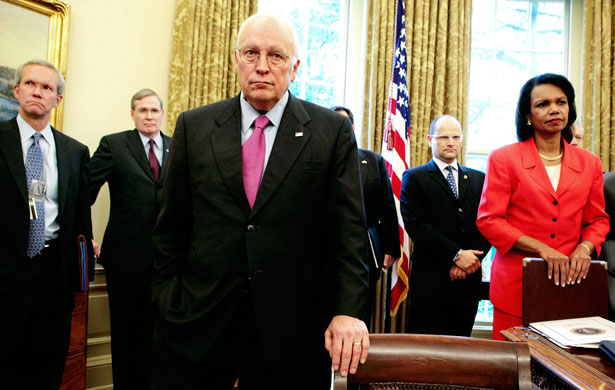 What pass for jokes at the annual White House Correspondents Dinner are, for the most part, failed attempts at comedy and commentary. Rarely do the assembled politicians and pundits employ humor for anything more than the appalling project of attempting to appear self-deprecating (as opposed to pompous) and good natured (as opposed to fiercely calculating).

But once in a great while a great moment occurs.

President Obama had one Saturday night, when he ruminated momentarily on the crude excesses of a certain former vice president.

Cheney, whose own presidential ambitions were dashed in the mid-1990s by disinterest and distrust on the part of his fellow Republicans, had to engineer his selection as George W. Bush’s vice president in order to secure the power he craved. But, once he had wedded his ambitions to the hapless “legacy” president, the second-in-command did indeed pull so many strings that he was understood by savvy Washingtonians as a virtual commander in chief.

Cheney hated handing off that power; as he initially had to do during Bush’s second term, when the president wised up the imbalance within his administration. It was even worse when the formal dethronement came in January of 2009, after Obama was swept into the White House and Joe Biden occupied Number One Observatory Circle.

While there was no question that the American people were tired of Bush, they were absolutely finished with Cheney—whose approval rating dropped to just 13 percent at the end of a tenure characterized by endless wars, neglected disasters, the collapse of the global economy and the bailout of Cheney’s banking buddies.

Typically, Cheney blamed everyone but himself.

In particular, Cheney blamed Obama for not immediately cleaning up the mess he and Bush had made of just about everything.

The former vice president has since 2008 (when, notably, his fellow partisans failed to invite him to that year’s Republican National Convention) made it his immediate and ceaseless mission to gripe about the succeeding administration. So it came as no great surprise when he told Playboy, “I look at Barack Obama and I see the worst president in my lifetime, without question—and that’s saying something.”

What did come as something of a surprise—and a delightful one at that—was Obama’s decision to parry the former vice president’s thrust with a devastating one-liner that had the advantage of being true.