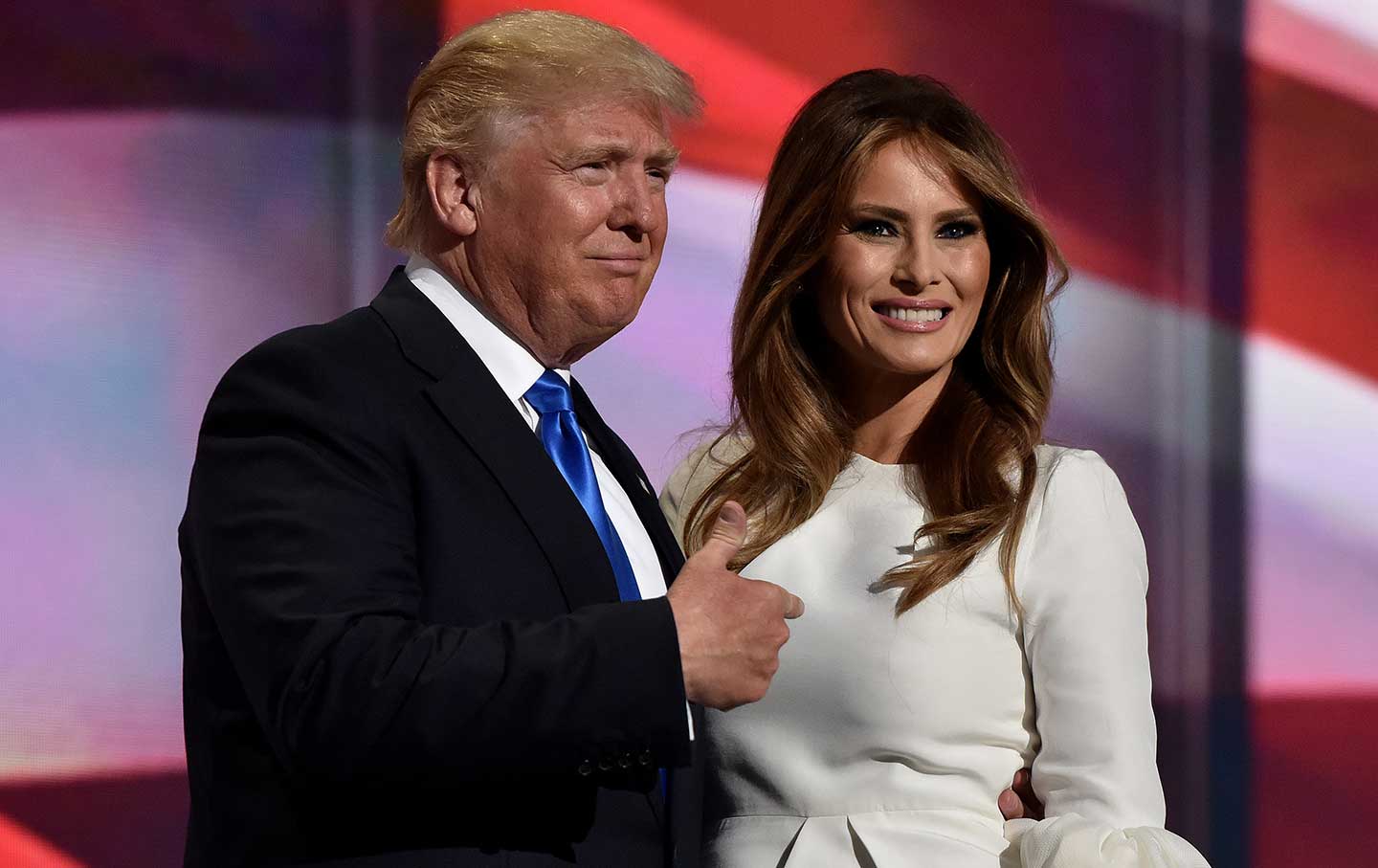 Donald Trump stands alongside his wife, Melania Trump, after her speech on night one of the Republican National Convention (Sipa USA via AP / Behar Anthony)

From cable news shows came suggestions that maybe a disloyal Trump staffer sabotaged the campaign with Melania Trump’s word-theft. In fact, he or she did Trump and the GOP a favor, because nobody was talking about the debacle sandwiched between the almost certainly inadvertent borrowings from black people. After Scott “Chachi” Baio and before the aspiring first lady, Monday night showcased the macabre and the mediocre. The grieving mothers, fathers, and siblings of Americans killed by brown people—“illegal aliens” and “radical Islamic terrorists”—blamed their losses, in bloody detail, on President Obama and the woman who would follow him. “I blame Hillary Clinton personally for the death of my son,” a furious Pat Smith declared about the killing of her son Sean in the 2012 Benghazi attack. The crowd then chanted, “Hillary for Prison,” a sentiment that was the only unifying idea of the night. Later they enlivened a lackluster post-Melania speech by former General (and Trump VP possibility) Michael Flynn by repeatedly shouting, “Lock her up!” (Why anyone would be scheduled to speak after Trump’s wife was the question I heard most on the slow walk out of the arena, from delegates and journalists, before and after the plagiarism allegations surfaced. Poor Joni Ernst!)

There was a visceral and occasionally alarming passion in the hoots and howls of the delegates every time they had a chance to boo Clinton. The only other moments of genuine excitement came when two of the night’s three black speakers declared “Blue lives matter” and “All lives matter,” praising American police and attacking Black Lives Matter protesters. You’ve got to give them credit: Republicans love black people who think the way they do. (Unfortunately, there aren’t many in Cleveland: Only 18 GOP delegates of 2,473 this year are African American.)

Milwaukee County Sheriff David Clarke, a genuine Fox News superstar, walked out to the most frenzied welcome (at least before the Trumps emerged) and delivered a call to arms that began by praising the jury that just acquitted the fourth of six Baltimore cops charged in the killing of Freddie Gray last year. He called protests “in Ferguson, in Baltimore, and in Baton Rouge,” in the wake of police killings there, “a collapse of social order” and claimed Black Lives Matter represents not “peaceful protest” but “violates the code of conduct we rely on.” Former New York mayor and failed 2008 presidential candidate Rudy Giuliani echoed Clarke with a rabid speech in which his hands came unleashed from his brain, and his teeth appeared ready to fly out of his mouth.

About policy: There was none. It was a night to trash Democrats, and the changing America they represent. When foul-mouthed ultra-right Twitter aficionado Scott Baio kinda sorta quoted Langston Hughes, and awkwardly declared, “Make America America again,” he clearly meant the opposite of what Hughes intended when he wrote “Let America Be America Again.” The incomparable black poet was beseeching the nation to live up to its stated but often betrayed ideals of equality and inclusiveness; Baio was telling the country to go ahead and betray them. That’s what many Trump supporters believe will make America “great,” once again.

The hatred for Obama in the GOP arena was less raucous and disruptive than for Clinton, but it still inflamed the crowd the way the hot summer Cleveland sun (and copious alcohol) reddened many delegates’ faces. I saw several “Make the First Family Great Again!” buttons, featuring the preening Trumps, on my way into the Quicken Loans Arena. That notion seems even more laughable and offensive now. Ironies abound. Michelle Obama, an accomplished lawyer, had to show herself to be a loving daughter, sister, wife, and mother in 2008, to counter the right-wing projection of her as an angry black Amazon who traded “terrorist fist jabs” with her husband. Career-free Melania Trump, already believed to be a devoted mother and wife—Trump famously declared wives shouldn’t have careers after first wife Ivana got too powerful—wound up mouthing the words of Michelle Obama during her unlikely moment in the political spotlight. That’s how brilliantly they summed up the family values every first lady is expected to project.

Unbelievably, or not, the Trump campaign released a statement that tried to defend Melania Trump’s stolen speech passages. “In writing her beautiful speech, Melania’s team of writers took notes on her life’s inspirations, and in some instances included fragments that reflected her own thinking. Melania’s immigrant experience and love for America shone through in her speech, which made it such a success.” I’m assuming “fragments that reflect her own thinking” refers to the passages of Michelle Obama’s speech she and/or speechwriters copied? That’s about as brazen as insisting a Star of David (in a clearly anti-Semitic graphic) was merely a “sheriff’s star.”

The black family in the White House is living out the real American ideal; the thrice-married Trump can only pretend to such virtue—or pay speechwriters to crib it from others. As former Obama scribe Jon Favreau tweeted: “Will be awkward when Trump talks about worshipping an awesome God in the Blue States on Thursday night,” a reference to a huge applause line in Obama’s historic 2004 Democratic convention speech.