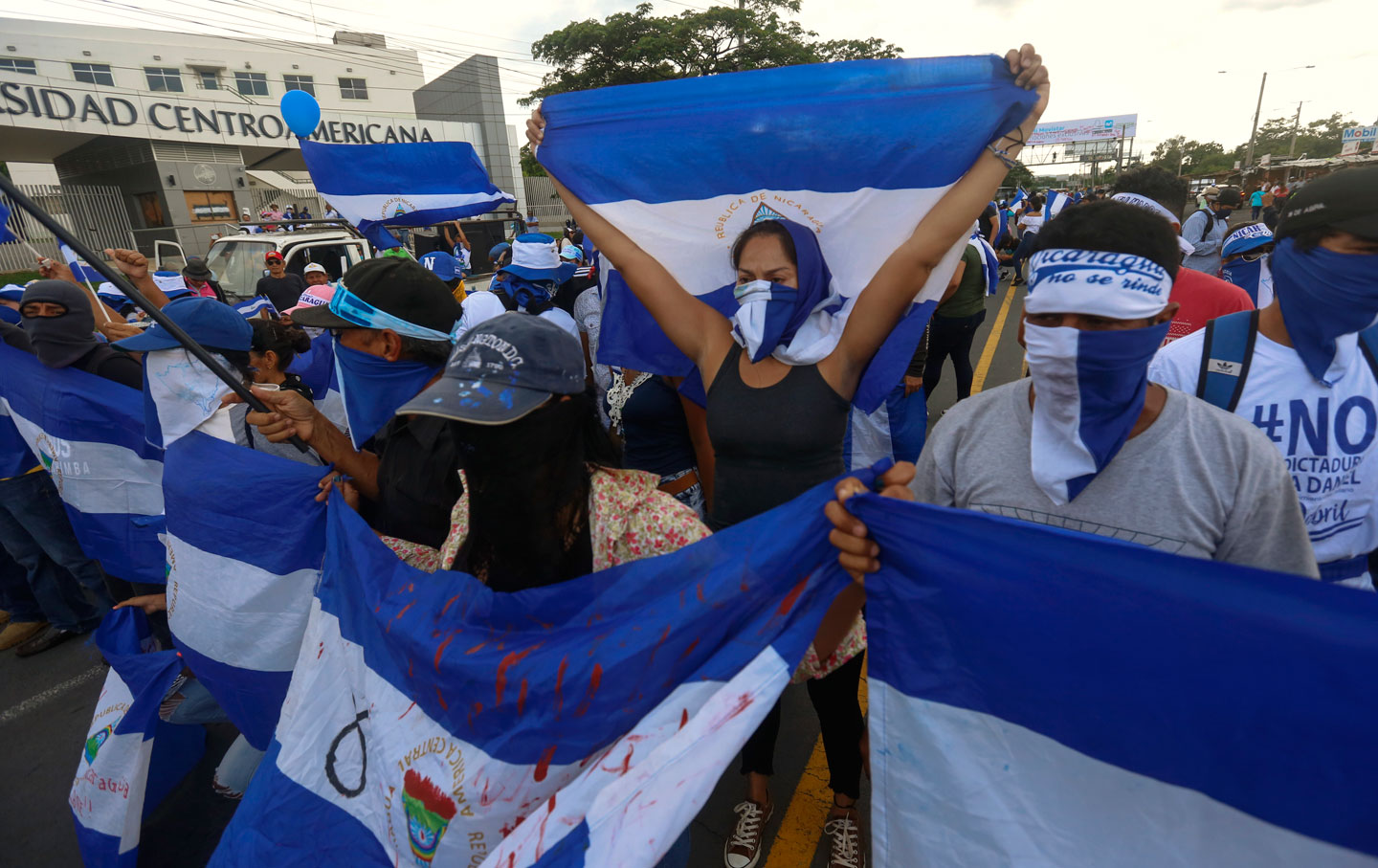 Anti-government protesters march outside the Central American University in Managua, Nicaragua, on Wednesday, September 26, 2018, before police blocked the march from reaching its planned destination, the local UN headquarters. More than 300 people are estimated to have been killed since April in months of anti-government protests and harsh government crackdown. (AP Photo / Alfredo Zuniga)

After participating in the April 2018 protests against the Nicaraguan government’s attempt to impose cutbacks on Nicaraguan Social Security, 21- year-old Jeancarlo López and Lesther Alemán have risen from student leaders to internationally known political activists. Both left Nicaragua earlier this year. They are in the United States as representatives of the Nicaraguan coalition organization, the Civic Alliance for Justice and Democracy. I spoke with them in Washington, DC, in October 2018 to discuss the situation in Nicaragua. The interview has been translated, edited, and condensed for clarity.

Andres Pertierra: What kind of visa are you here on? What do you plan to do when the period of stay on your visa ends? Do you plan to request asylum?

Lesther Alemán: A tourist visa, with a relatively short stay, but I don’t plan to request asylum. We have self-exiled ourselves. We have never considered asylum.

Before the period ends, I know that I have to travel. I wouldn’t travel to Nicaragua, not anymore. But I’m telling you, it’s not easy to think about migratory status when the only place where I have a family member outside of Nicaragua is in the United States. My house in Nicaragua has been devastated, just like my family has. So, I still haven’t had time to think about us, right. About me.

Jeancarlo López: I am also here on a tourist visa. We’re in a process where we’re trying to figure out what the best decision is. We cannot apply for asylum and we don’t want to apply for asylum. But we’re looking for the best option for us to be somewhere.

AP: Would you feel safe returning to Nicaragua before Daniel Ortega left power?

JL: Not really. Right now, entering Nicaragua would be going into the eye of a hurricane, where I’d put my family in danger and even our working group, which is in Nicaragua right now. Because persecuting me would turn into persecuting them. As such, right now I don’t see a way in. From here I can do so much more than if I was in Nicaraguan territory.

AP: Ideally, how would the current Nicaraguan crisis be resolved?

LA: Ideally? Let’s dream a little. We’ve always believed in a peaceful solution because we don’t want to precipitate a civil war. We’ve tried to avoid it at all costs. Unfortunately, every day you see the regime push the Nicaraguan people towards intolerance. Which is a really really, really thin line in Nicaragua, because it is revolutionary. It has a revolutionary past.

Ideally, it would be a process done at the negotiating table. Today, we see as one solution that Daniel Ortega would come to the table with the political will to have a dialogue. And that he would respect the negotiated agreements. Nicaragua is willing to give a peaceful solution to the crisis. Because, while it is true that the SICA, the Central American Integration System, has at one time tried to do this, to be a sort of interlocutor of both sides, we say “all those who come to support a peaceful solution to the political crisis will be welcome in Nicaragua.”

Saying that we should return to the status quo is not viable. The country needs a solution now. So, ideally, we sit at the table, negotiate a solution, push forward elections; there is a route to democracy which we can discuss. In that route, a partial reform of the political constitution, since it is like Frankenstein right now, with pieces from everything, and in the end nobody obeys it. In addition to the constitution comes a reform of the law on political parties. It is vital. That’s where you begin the process of rebuilding the country. An agreement, above all, of disarmament against the paramilitaries. We don’t want to fall into a Nicaragua that is like Colombia. We have to avoid that at all cost.

JL: The ideal that I see is sitting at the negotiating table. Where we discuss a route to democracy. A discussion about security and atmosphere of peace in Nicaragua, and one where we are able to achieve the negotiation which the people of Nicaragua demand so loudly. The government is terrified by the idea of a national dialogue where there is clear mediation. For example, the episcopal conference just delivered a resounding blow and a clear counterpart who is seeking a solution. There is already a route to democracy on the part of the opposition or the Alliance, which has now joined in, and it is backed by the National Blue and White Unity coalition, which works together with the alliance. 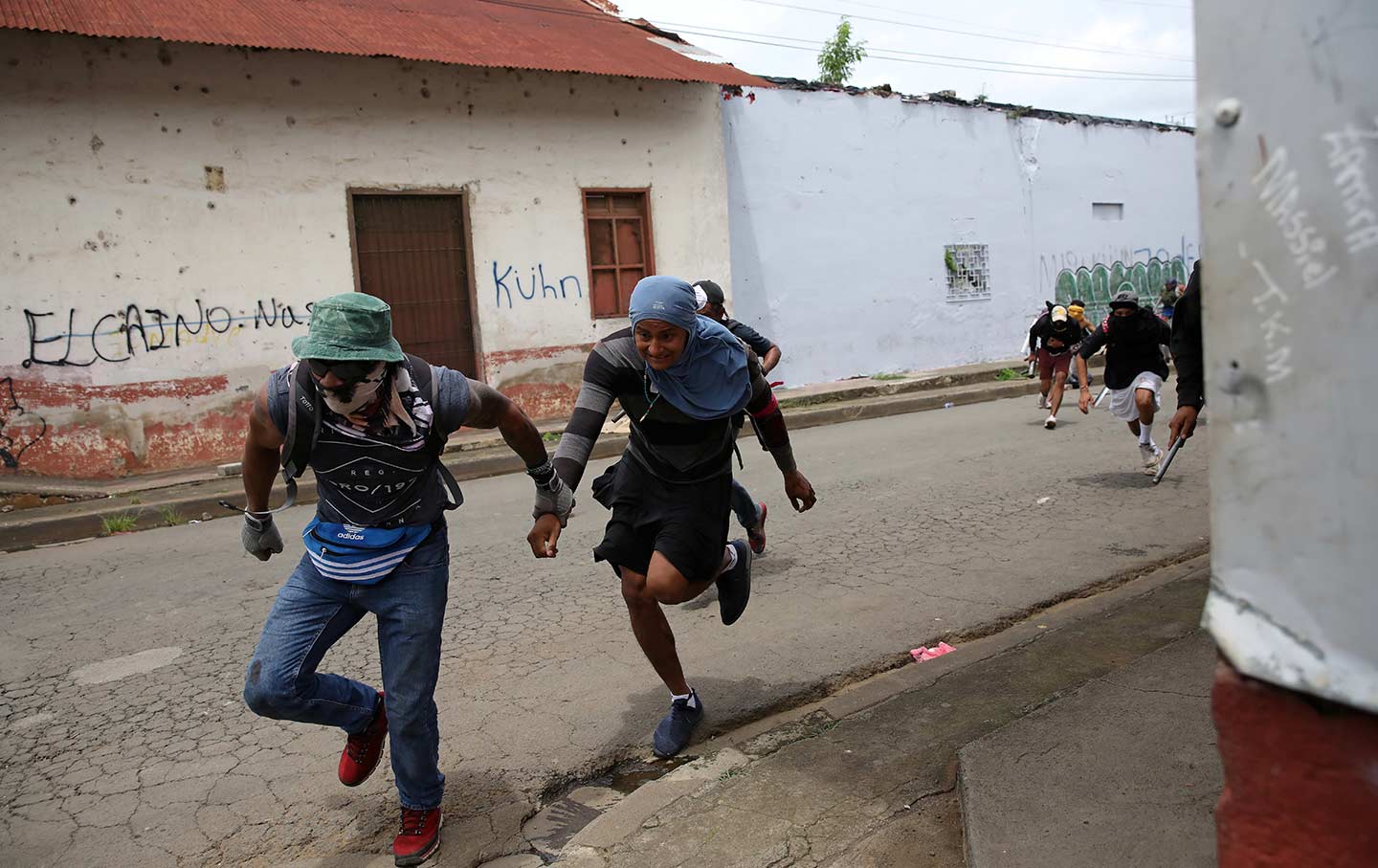 ‘An Eternal Night of Persecution and Death’: Activists Speak Out About Nicaragua’s Crackdown

LA: I don’t see an interventionist United States at present. Because we haven’t seen even the least interest, of what was perhaps the interest of the ’80s. I think the US has been very clear with us. They have seen in Nicaragua an obstacle to the total containment of drug trafficking, gangs, and all that. And I think that this is a common interest here. We share it with the United States. And even the government of Nicaragua shares this interest. I do see a strategic economic interest, obviously, just like any government. Just like Daniel Ortega and his businesses. But above all we have come here to emphasize the interest that there should be for Nicaraguan society. There are many projects which were developed by the United States in Nicaragua of which today we don’t see any fruit. I don’t see a country interested in interventionism, nor have we come to ask for that.

JL: The history of Nicaragua, we have already seen, has been deeply tied to the United States, with older people having more memory of that. We do know that we don’t want very aggressive activity on the part of the United States. We’ve asked the United States, just like all the other countries, to apply pressure and establish a line of communication with the government of Ortega and Murillo in order to achieve this negotiation, and that it be done by already established means. We don’t want the United States to overstep itself, because we know that the Nicaraguan people don’t want that. We want what we’ve asked from most countries, for example in the performance of the OAS [Organization of American States], on the part of the ambassador of Argentina, we’ve seen support through Canada’s performance; these are the kinds of requests that we are making of the United States. That it sustain its support through established mechanisms.

AP: I ask in part because, for example, a few months ago Trump proposed an invasion in a meeting, as a solution to the crisis in Venezuela. In the end, this didn’t become a reality, but he proposed it as a possible solution. Marco Rubio also said that one possible solution to the crisis in Venezuela would be a military action. And in terms of strategic interest, within the Republican Party, for many Cuban Americans, the objective isn’t just human rights in Nicaragua but also Nicaragua and Venezuela, Nicaragua and Cuba. And so, for that reason they seem to have several interests.

LA: We have seen the United States’ concern about the maneuvers of Cuba and Venezuela within the country. I have not seen Donald Trump take the same position towards Venezuela as he has towards Nicaragua. We have also yet to see a request for military intervention in Nicaragua. It neither was nor is the objective of the country, because we’d unleash more of the same. We want a struggle, and we’ve had a struggle, that is civil and peaceful. It hurts. It is long and tiring because we frequently have to figure things out through trial and error. Nobody taught us how to struggle peacefully. Nobody. We always resort to arms. Now, I think that as young people we have a conviction of wanting peace and above all stability for Nicaragua. Strategically, yes, it is in our interest to have a watchful eye on us, not just from the United States but on the part of many governments, preventing at all costs that Venezuela and Cuba have anything to do with Nicaragua. Because, I’m telling you, while it is true that the United States may have an interest in my country, Venezuela could have one in many countries.

And we see Maduro as a potential source of oxygen for Ortega. Just recently it was revealed that there isn’t much money coming from Venezuela to Nicaragua right now, but there can still be many intentions. An army sent by Maduro doesn’t worry us, because they get frightened by a drone. We aren’t worried about an army sent by Maduro, because we already have an army in Nicaragua, one that has maintained secrecy publicly, but which internally has been participating in repression. We’ve also let that be known here in the United States and in other countries. That the Nicaraguan army should be careful. Why? Because if we don’t disarm the paramilitaries, then they can’t repress us, but they are repressing the Nicaraguan people. So, yeah, I can say that in the end, in truth, the objective is that we understand this struggle not in terms of ideas, but in terms of country.

JL: Yes, but in Nicaragua we aren’t asking for intervention. We aren’t asking for military forces to invade us, like for example maybe Venezuela is, as several voices have made themselves heard on the issue of military aid. Nicaragua isn’t asking for and doesn’t see this as a solution. Military forces aren’t the answer because that would drag us towards aggression and away from the peaceful, civic rhythm, which is what we’ve wanted to move towards. Because something that we have a handle on and has been difficult to learn is that Nicaragua has been resolving its conflicts through the use of arms and this is completely new. Because now we’re trying to resolve the conflict based on a peaceful and civic solution. One where we’ve had no manual. And since we have a memory of an armed struggle, we’d rather not repeat it this cycle because we’re learning that that approach isn’t working. Instead, we’re falling into a vicious cycle which only ever results in the decline of the country. When the political situation becomes aggravated, we fall into a state of economic crisis and we feel that the solution itself must change. And that that solution must be civic and peaceful.