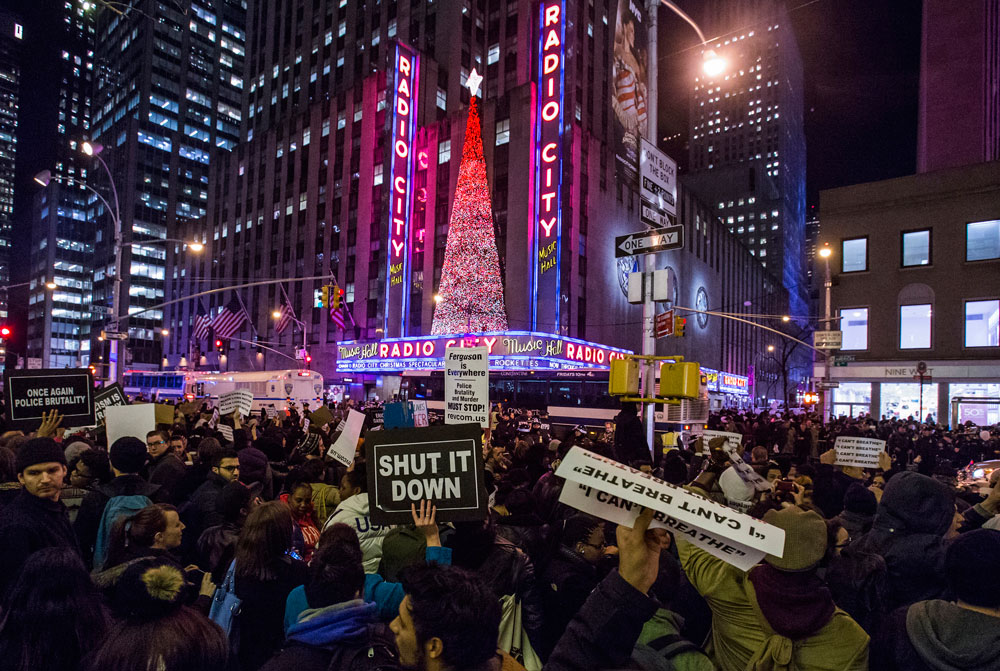 Protesters hold placards as they demand justice for the death of Eric Garner, while marching past Radio City Music Hall in Manhattan on December 3, 2014. (Reuters/Adrees Latif)

The streets of New York seethed last night as protesters reacted in anger and shock to the news that a grand jury in Staten Island had declined to indict white police officer Daniel Pantaleo for killing Eric Garner, a black father of six, despite a video that captured the officer choking the 43-year-old to death on a bright July afternoon.

The protesters poured from offices and apartments, stores and restaurants, drawn by a stream of texts and tweets urging New Yorkers to demand justice for a crime that so many had witnessed but so few—a grand jury of just twelve—had decided not to prosecute. Some waved signs reading, “I can’t breathe”—Garner’s last words, uttered eleven times, before he died. Others chanted, “Hands up, don’t shoot,”—the rallying cry that has come to symbolize the murder of Michael Brown, the unarmed black teenager who was shot and killed by a white police officer in Ferguson, Missouri, just days after Garner was killed. Like Pantaleo, the officer who killed Brown, Darren Wilson, was let off the hook last week after a grand jury in Ferguson refused to indict him. Many of the protesters who rushed into the streets last night were the same ones who had raced to Union Square and elsewhere last week, after news of Wilson’s non-indictment game down, giving the evening a strange ritual flow.

The first of these protesters gathered in Times Square at 5 pm, about two hours after the announcement that the jury had chosen not to indict Pantaleo. One protester, Israel Gomez, was wrapped in a Mexican flag and holding up a sign reading “Black Lives Matter,” a pairing he had chosen deliberately, he said, to make the connection between the massive demonstrations in Mexico against their government for its role in the disappearance of forty-three students, and the discontent in America against unaccountable police.

“The state is committing violence against people, and it [is] getting away with it,” Gomez told The Nation.

The hundreds gathered in Times Square soon began moving toward Rockefeller Plaza, chanting, skirting police barricades and marching down the street. Stopped cars honked in support and frustration. As they pressed east, a group further north marched through Columbus Circle, halting traffic on the way to Harlem. Seventy-year-old Willie Everett, a black man who said he joined the rally after coming upon it by accident, recalled a recent police killing of Tamir Rice, an unarmed black child, in Cleveland.

“[The police] can’t stop killing us,” he said. “They need to take their guns away, but the guy in Staten Island, they just choked him. This is crazy, it is crazy.”

Several hundred people eventually made their way to the West Side highway, where minor scuffles broke out after NYPD officers unsuccessfully tried keeping protesters off the street. After walking on the highway and stalling traffic for about an hour, demonstrators joined with another group in the Upper West Side. Later, demonstrators occupied the Brooklyn Bridge and Grand Central Station. At any given moment there were five or six groups playing cat-and-mouse with the NYPD, linking up and breaking away as police followed.

Nearly 100 blocks north of the protests, Eric Garner’s mother, Gwen Carr, and his widow, Esaw Garner, stood with the Reverend Al Sharpton and members of the National Action Network in front of news cameras. When asked if she would accept an apology from Officer Pantaleo’s family for her husband’s death, Garner responded, “Hell, no.”

“[Pantaleo is] still feeding his kids, and my husband is six feet under,” she said. “And I’m looking for a way to feed my kids now.”

Gwenn Carr echoed her daughter-in-law’s frustration a day earlier at a vigil on Staten Island, one of the many that has taken place every Tuesday and Thursday since Garner’s death. The grand jury’s decision had yet to come down, but Carr was worried that the Ferguson grand jury’s decision not to indict Darren Wilson boded ill for her son’s prospects for justice—a fear that turned out to be painfully justified.

“We’ve been sitting, waiting, patiently, but enough is enough. We’ll wait, we’ll wait on the decision, but we hope we get a fair decision and we hope the grand jury is a fair and just grand jury,” she told The Nation.

Asked what fairness would look like, she said, “Fair would be for everyone who took place in my son’s murder that day to be held accountable. And to pay for it. Why is those officers still on duty, seeing their families, and my son is dead? That’s not fair—that’s not justice. Desk duty means you’re not on the street, you’re getting the same pay. You’re getting vacation. I’m not okay with that.”

Yet, Carr also said she felt encouraged by all of the energy of young New Yorkers displayed after that announcement. “Thousands of people in the street,” she told The Nation. “It’s so wonderful. People need to feel this.”

Carr recoiled at the thought of riots in New York, but stressed that while she wanted positive energy at the protests, her family hoped that justice would be served. After the announcement the next day, Carr told CNN viewers, “We want you to rally, but rally in peace. Make a statement, but make it in peace.”

But the jury’s failure to indict Pantaleo has added fuel to a fire, and the movement sparked by Michael Brown’s death now transcends any one particular case. Eric Garner in Staten Island, Michael Brown in Ferguson, Tamir Rice and John Crawford in Cleveland, Vonderrit Myers in St. Louis, Ezell Ford in Los Angeles and many others have become symbols of violent, racist policing run amok. And in the face of a court system that defers to the wisdom of officers at all possible junctures, people feel powerless, inspiring louder and more direct calls for change. The car that was torched late last night in front of a Brooklyn NYPD precinct may be an example of this increasing desperation.

Today, actions are planned throughout the city and the country, and many more thousands are expected to show up. Two weeks ago, after an NYPD officer killed yet another unarmed black man, Akai Gurley, in a Brooklyn housing project, New York Mayor Bill de Blasio urged citizens not to “connect the dots” between the deaths of Gurley, Garner and Brown. If the streets tonight resemble what they did last night, it will mean that New Yorkers already have.