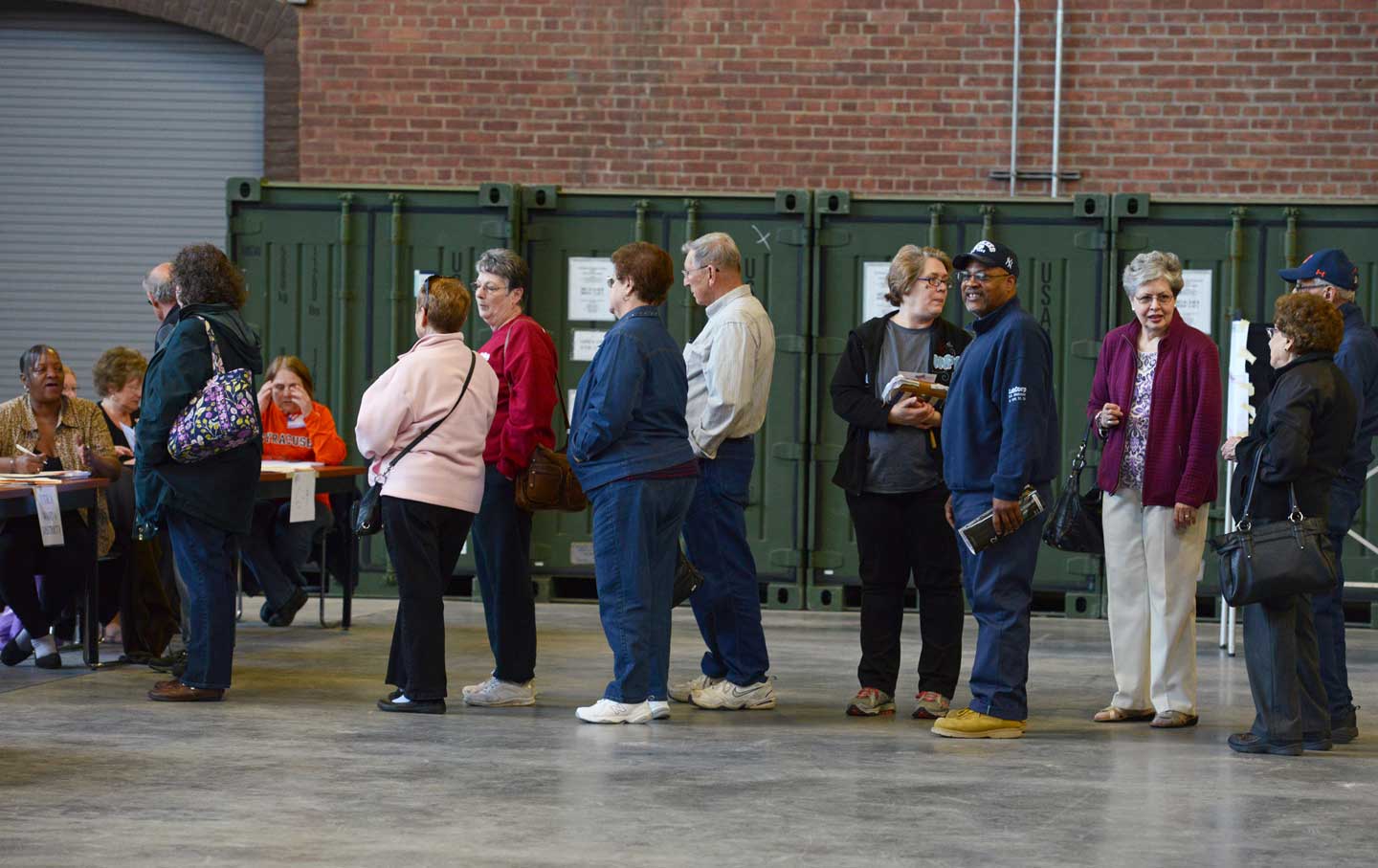 People wait in line to cast their vote in the New York presidential primaries on Tuesday, April 19, 2016, in Utica, New York. (Tina Russell / Observer-Dispatch via AP)

I voted without problems yesterday, but many other New Yorkers weren’t as lucky.

The Kings County Board of Elections purged 126,000 registered Democrats from the voting rolls in Brooklyn, prompting an outcry from Mayor Bill de Blasio and an audit from Comptroller Scott Stringer. “It has been reported to us from voters and voting rights monitors that the voting lists in Brooklyn contain numerous errors, including the purging of entire buildings and blocks of voters from the voting lists,” de Blasio said. “The perception that numerous voters may have been disenfranchised undermines the integrity of the entire electoral process and must be fixed.”

Polling places didn’t open on time, voting machines malfunctioned, and voters showed up to find their names weren’t on the rolls. Some voters had their party affiliations mysteriously switched from Democratic or Republican to independent or non-affiliated and couldn’t vote in the closed primaries. And 3 million New Yorkers, 27 percent of the electorate, didn’t get to vote because they weren’t registered with the Democratic or Republican parties, and the deadline to change party affiliation was an absurd 193 days before the April 19 primary, as I reported on Monday.

As a result, only 19.7 percent of eligible New Yorkers cast a ballot, the second-lowest voter turnout among primary states after Louisiana, according to elections expert Michael McDonald. There were over 900 calls from frustrated voters to the Election Protection Coalition, more than in any other primary state.

These problems could have been avoided if New York had electoral reforms like same-day voter registration and early voting. Comptroller Stringer recently proposed a number of good policies that would make it easier to vote and have been introduced in the New York legislature. Hopefully the problems in the primary will lead to legislative action.

Moreover, Brooklyn’s voter purge could have been stopped if the Supreme Court had not gutted the Voting Rights Act, since Kings County was one of the jurisdictions that had to approve its voting changes with the federal government based on a history of voting discrimination. Brooklyn, the Bronx and Manhattan were covered under Section 5 of the VRA in 1970 because they had English-only literacy tests dating back to 1921 and very low turnout among minority voters.

In 2013, New York urged the Supreme Court to preserve the VRA. “The benefits of Section 5 greatly exceed the minimal burdens that Section 5 may impose on States and their political subdivisions,” it wrote in an amicus brief.

Instead, we’ve seen problems across the country in the first presidential election in 50 years without the full protections of the VRA—from five-hour lines in Arizona’s Maricopa County, to voters turned away from the polls in North Carolina to last-minute voter purges in Brooklyn.

Supporters of Hillary Clinton and Bernie Sanders should join forces to make it easier to vote, like they did recently when jointly suing Arizona. Restrictive voting laws hurt younger voters who are more likely to support Sanders and voters of color who are more likely to support Clinton. This cause would be good for the Democratic Party and, more importantly, for democracy.