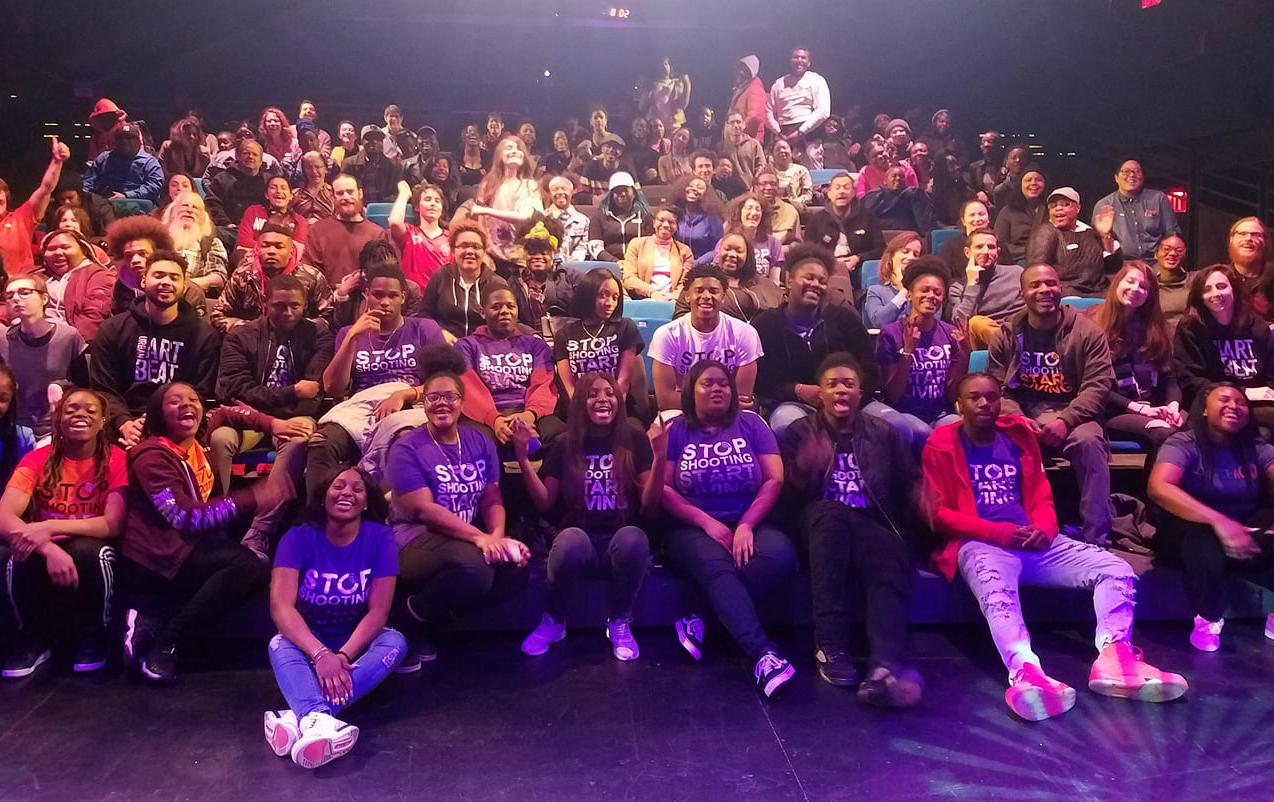 Organizers with Youth Organizing to Save Our Streets. (Courtesy of YO S.O.S.)

Last summer, a group of 13 youth organizers approached the anti–gun violence organization Youth Organizing to Save Our Streets (YO S.O.S.) with a proposal. The high-school students wanted to arrange an event that would attract both the black and Jewish communities of Crown Heights, Brooklyn, two communities at the center of the infamous 1991 Crown Heights riot. The students created a kosher menu, facilitated workshops, and led a discussion to bring the communities together. Daimirae Reddock, an 18-year-old YO S.O.S. member who helped lead the event, aptly titled “Unity Heals,” said that this sort of inter-community dialogue was critical for the future of the neighborhood. “We can understand, and we can go past that, and now we can come together,” said Reddock. Some of the organizers called it one of their proudest moments in YO S.O.S.

Since it officially began in 2011, YO S.O.S., the youth branch of community-led anti–gun violence movement Save Our Streets (S.O.S.) Brooklyn, has served more than 220 students from more than 50 high schools in the area. A project of the Center for Court Innovation and the Crown Heights Community Mediation Center, S.O.S. operates in four neighborhoods in Brooklyn and the Bronx, training the next generation of activists to lead the cause in both remedying the effects of gun violence and preventing its spread. Youth organizers attend weekly workshops where they examine the nature of gun violence. They also lead campaigns like the Crown Heights community discussion to effectively combat future violence. The participants receive community service credit and stipends and an active alumni network provides resource sharing, case management, and paid internships

Despite their young age, many of the students involved in YO S.O.S. have dealt firsthand with the effects of shootings. “I’ve known people who were affected by gun violence, and that’s why it hit home for me to join,” said Nikkia Varns, a 19-year-old YO S.O.S. alum who was part of last year’s cohort. Having seen the negative effects gun violence has had on the lives of close friends, Varns was drawn to YO S.O.S. for its restorative approach to the problem. “Our model is to cure violence,” she said, which means equally taking into account its causes and effects. Varns emphasized the importance of understanding trauma, learning conflict mediation and de-escalation techniques, and practicing self-care.

“The work we do is in many ways grassroots,” said Heather Day, S.O.S.’s director of youth programs. “It’s about working with people that have been closely affected by these issues and therefore have unique insight and understanding towards the solutions, and then amplifying their voices.”

Rahson Johnson, YO S.O.S.’s youth programs specialist, said he used to be on the other end of the issue when it came to gun violence. Having been incarcerated for 23 years, Johnson’s story speaks to the organization’s focus on restorative justice. “I can go back out there and say, ‘This is my neighborhood, I actually damaged it—and I’m here to heal it right now,’” he said. Working closely with YO S.O.S. students, Johnson offers youth organizers both personal and professional insight through his lived experience. Still, he regards the youth organizers as the program’s primary peer educators. Johnson said that everything the students learn from YO S.O.S. they spread through their schools, among their friends, and within their families. It is valuable not just for the tangible and lasting impact it leaves on individual organizers, he said, but also for the mark that it leaves on fellow members of the community.

Like its parent organization, YO S.O.S. resists the idea that gun violence is an ordinary feature of modern life. The group keeps track of shootings in its Crown Heights and Bed-Stuy “catchment areas.” Each shooting is logged into their system and then followed by an S.O.S. “shooting response,” where community members gather to publicly rally against gun violence. “Every time there’s a shooting, our youth will go and stand with them,” Day said. “We do that so these incidents don’t become normalized.”

According to Day, the conversation doesn’t end with guns. They look at the social, political, cultural, and economic factors that lead to gun violence in the neighborhoods they cover. “We know it’s not an issue that you can approach from just one angle—it’s not just gun control,” Day said. “We’re talking about institutional racism, we’re talking about the school-to-prison pipeline, we’re talking about toxic masculinity.”

Similar to weak community relations, Reddock said that if left unaddressed, the cycle of gun violence becomes repetitive. For her, that is all the more reason why she and others must work to break it.. “When I think about how violence affects me and the people around me, I can’t sit back and let it happen,” she said.