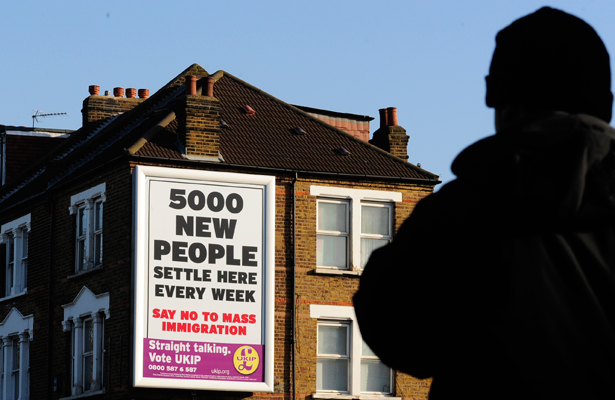 Following the 2014 European elections, history was made in Britain. When the votes were counted, an indisputable fact emerged: an ultra-nationalist, anti-European, anti-immigration political party, the UK Independence Party (UKIP) came first, with 27 percent of the popular vote. The Liberal Democrats, led by former Nation intern Nick Clegg, paid the largest price for the coalition government’s unpopularity, with their delegation to the European parliament slashed from ten to just one. The Conservatives, who lost seven seats to UKIP, were battered into third place. But Ed Miliband’s Labour Party, which finished just ahead of the Tories, had little cause for celebration, as Rotherham, Hartlepool and other traditional Labour strongholds also fell to UKIP. Last week Nigel Farage, the UKIP leader, said he would launch his party’s new manifesto for the 2015 parliamentary elections in Doncaster, Ed Miliband’s constituency.

How did it come to pass that UKIP, a party whose base has been described as retired Tory colonels “desperate for the re-introduction for the birch and only cheering up after the first pink gin of the day,” was able to attract so many working class voters? Here’s one reason: since 2010, Britons have suffered the most prolonged drop in living standards for fifty years. Many families are living paycheck to paycheck, with big increases in energy, weekly food shopping and fuel bills. On top of this is the austerity program robustly implemented by the Conservative-Liberal government. Cutting back on welfare and downsizing the public sector has sharpened worries on personal economic insecurity in the working and middle class. Labour needs to resist the trend to turn towards the right but come up with a radical, reforming and practical agenda fit for the 21st century.

The success of UKIP also has much to do with widespread political alienation, which came to a zenith in 2007 when a number of MPs were widely ridiculed for falsely claiming expenses on an almost industrial scale. A few went to prison; many more were forced to pay back thousands of pounds. All this allowed UKIP to depict politicians as being out of touch, corrupt and most concerned with their own interests.

This has been a perfect election for UKIP. It claimed the outsider mantle as an insurgent, popular movement taking on an out of touch political class—a David to the establishment Goliath. But it’s easy to anoint yourself the anti-politics party when the both the country and opposition are led by political leaders who not only visually resemble each other—as three middle to upper class white males in their 40s—but also share similar backgrounds as career politicians.

Not that we should be fooled by Nigel Farage’s efforts to paint himself as a “man of the people” photographed down at the pub with a cigarette and a pint of beer. Farage is a privately educated former banker who worshipped at the feet of Margaret Thatcher and her destructive neo-liberal policies. Rather than being new and insurgent, UKIP candidates show a dated and retro party:  racist, homophobic and sexist, and a few who have a track record of supporting neo-Nazi groups.

Instead of energetically confronting the UKIP, Labour mounted what has been described as a fragmented and weak campaign.  Perhaps leaders have been hesitant to attack UKIP for fear of losing white votes and instead have responded to an anti-immigration and anti-EU agenda by talking tough about control of immigration at UK borders. In fact some prominent Labour MPs have suggested that the Party should take a tougher line on immigration. Trying to outflank the right on immigration is a political dead-end. Britons have been worried about foreigners for more than 150 years. Irish and Jewish immigrants who came to the country in the nineteenth century faced similar racist rhetoric: They were taking British jobs, putting pressure on housing and public services such as education, as well as changing the identity of the country. Progressive parties need to mobilize against the politics of fear but this can only be achieved by a different approach, based on recognizing the importance of immigration to everyday UK society. Who looks after and cares for elderly relatives in the care home? Who repairs your house when a leaking pipe floods it? Who picks the fruit that you buy at the local supermarket? Where can you buy bread or milk when other shops are closed? Highlighting the informal, lived benefit of immigration is the best way to diminish the toxic rationale of UKIP.

The Labour response should not be about promising more austerity if it wins the 2015 General Election. It needs to have a reform agenda that is fixed on rebuilding the economic base through long-term investment in infrastructure, skills and knowledge, protecting workers against the chaos of footloose capital and increasing the minimum wage. In short, it needs to focus on growing a modern economy that narrows inequality and promotes economic well-being for the many rather than protects the few.

The extreme right trades on insecurity—both economic and political. Part of the UKIP message is that immigration to Britain is out of control—with special bile directed towards economic migrants from Eastern Europe. Combined with this is a rejection of multiculturalism. Since the 9/11 attacks in New York and Washington DC and the 7/7 bombings in London, we have seen a rapid retreat of national support for multiculturalism under both Labour and Conservative governments. In 2007, the Labour Prime Minister, Gordon Brown repeated a slogan of the far right when he said his aim would be “British jobs for British workers.” The current incumbent, David Cameron, announced in 2011 that “State multiculturalism had failed.” Both Labour and the Tories have pursued anti-terror policies that placed a spotlight on British Muslims as a threat. Many other social democratic governments across the EU have also followed these policies. It is small wonder the Far Right is doing so well in 2014.

Rather than pandering to these siren calls, Labour has to lead the case for a modern, multicultural society that needs the creativity and skills of migrants to compete in the global economy. Census projections show that Britain will have a rapidly growing minority population and a shrinking of older, semi-skilled and unskilled voters who support the likes of UKIP. It makes no political sense to try and outflank the Far Right on immigration. This is not a Labour approach and people will not believe it. Much better is to build a progressive coalition of people who palpably do not support UKIP:  the young, women, minorities, educated, middle class liberals and traditional working class core support in cities and towns. This cannot be a lukewarm effort but built on positive vision of a fairer, diverse Briton mobilising the talents of all people.

The 2014 elections showed that far right parties like UKIP have prospered because of a perfect storm: economic austerity, discredited politicians and remote institutions. More than ever it is important to make the case for the reality of difference and diversity rather than the myth of insularity and homogeneity. This really is the new Battle for Britain. Extreme right wing parties like UKIP want to reclaim a mythical past, but their policies on the economy, immigration, business, women, climate change and taxation are pathetically dated. Progressive European parties like Labour need to learn the lessons from the 2014 elections.  They must find a way to connect with voters by offering a radical, practical and reforming agenda that plays on the politics of hope rather than fear.