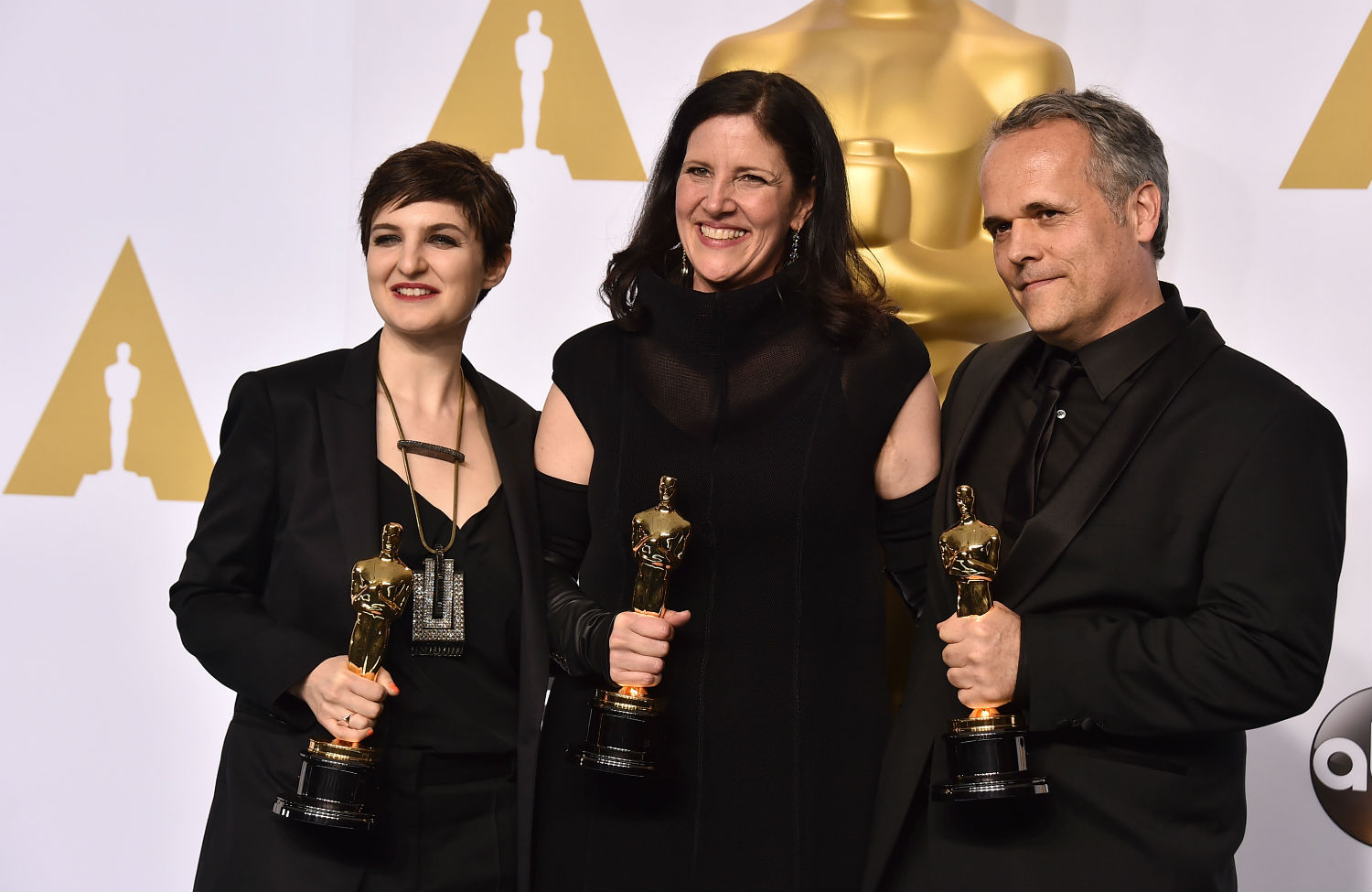 Mathilde Bonnefoy, and from left, Laura Poitras and Dirk Wilutzky at the Oscars, 2015 (Photo by Jordan Strauss/Invision/AP)

Last year, I thought The Act of Killing, Joshua Oppenheimer’s innovative examination of mass slayings in Indonesia during the 1960s, deserved to win the Oscar for best feature documentary. Instead, the Academy of Motion Picture Arts and Sciences gave the award to a film with broader appeal, 20 Feet From Stardom, a review of life as a background singer on pop records. At the time, a friend quipped, “20 Feet From Politics.” This year, however, the academy didn’t shy away from awarding a nakedly political film: Laura Poitras’s Citizenfour, a stunning vérité account of the initial reporting on Edward Snowden’s National Security Agency leak, took home the biggest documentary prize of the year.

At a moment when the most powerful nation in the history of the world is going astray, upending the very foundations of liberal democracy, Citizenfour’s victory was urgent and necessary. The New York Times film critic A.O. Scott might have put it best, calling the picture “a primal political fable for the digital age, a real-time tableau of the confrontation between the individual and the state.”

The stakes are established early in the film, when Poitras reads aloud an e-mail she got from Snowden at the start of their conversations: “From now, know that every border you cross, every purchase you make, every call you dial, every cellphone tower you pass, friend you keep, article you write, site you visit, subject line you type is in the hands of a system whose reach is unlimited but whose safeguards are not.”

In the course of the documentary, Poitras travels to Hong Kong with Glenn Greenwald to meet Snowden, who explains on camera who he is and what he is handing over to the journalists: a trove of documents detailing worldwide spying operations of the NSA and its partners. The challenge of exposing such information seems considerable, but Snowden handles it with an ease that betrays his intelligence and determination; he remains his own best spokesman.

Snowden himself couldn’t have been more clear about understanding all of this in a statement he released shortly after the announcement of Citizenfour’s Oscar. “When Laura Poitras asked me if she could film our encounters, I was extremely reluctant. I’m grateful that I allowed her to persuade me,” Snowden said, via the American Civil Liberties Union. “My hope is that this award will encourage more people to see the film and be inspired by its message that ordinary citizens, working together, can change the world.”

The importance of Snowden’s revelations was on display again recently, when the Intercept’s Jeremy Scahill and Josh Begley published a piece based on documents Snowden had leaked. They detailed efforts of the NSA and its partners in British intelligence to steal, in bulk, encryption keys for cellphone SIM cards, allowing the spy agencies to listen in easily on any communications—calls, texts, e-mails, anything—sent over the cellphone-service provider’s network. In order to acquire encryption keys, Scahill and Begley reported, the spies “accessed the e-mail and Facebook accounts of engineers and other employees of major telecom corporations and SIM card manufacturers.”

Scahill and Begley point out that after the Snowden revelations began, Barack Obama sought to reassure the world that “the United States is not spying on ordinary people who don’t threaten our national security.” But that turns out, in this latest story, to be yet another falsehood pushed by the US government about its intelligence work. ACLU technologist Christopher Soghoian told the Intercept, “These people [engineers and telecom employees] were specifically hunted and targeted by intelligence agencies, not because they did anything wrong, but because they could be used as a means to an end.”

Perhaps most disturbing, that “end” doesn’t even pretend to be an aim of thwarting terrorist plots or even listening in on terrorist communications. Rather, what was once regarded as a means of achieving such an aim—collecting intelligence—has become the end in and of itself. That goal stems from an ethos attributed to former NSA chief Gen. Keith Alexander: “collect it all.” In January, the journalist Mattathias Schwartz, writing in The New Yorker, cast more doubt on the efficacy of vacuuming up “the whole haystack,” as Alexander once rendered it.”

So “collect it all” might not even work well, yet it remains the order of the day for America’s top spies. And at every turn before and after Snowden’s revelations, US officials can’t seem to tell the truth about what they’re doing. At one point in Citizenfour, Snowden, in his typical stark manner, explains just what the goal is: “We are building the biggest weapon for oppression in the history of mankind.”

Weapons aren’t always deployed, but we should all worry about the potential power they can unleash when they are. That’s what makes Snowden’s revelations so essential to our democracy. If an Oscar win brings more attention to the film and the warning Snowden persuasively delivers in it, all the better.