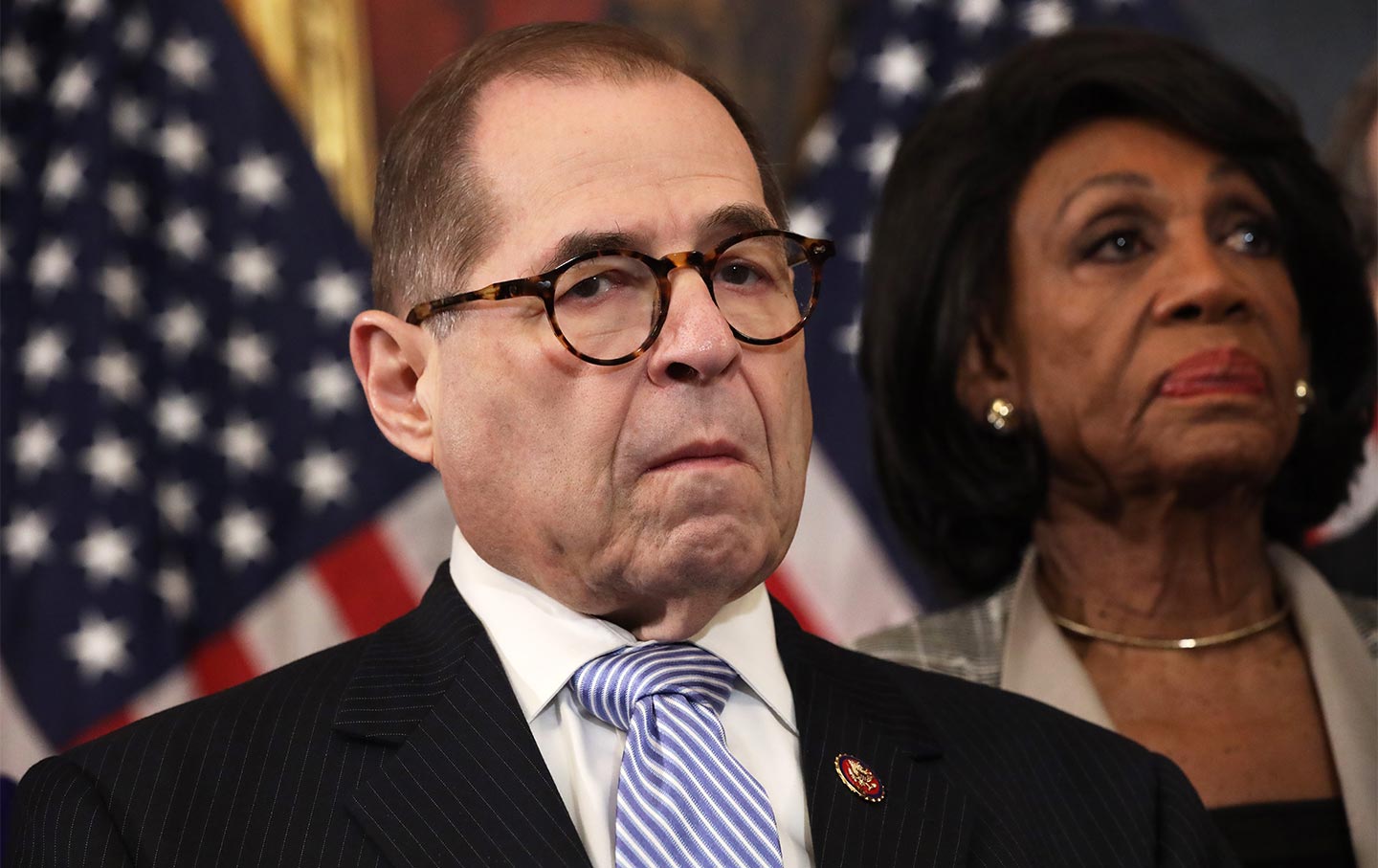 House Judiciary Committee chair Jerry Nadler has the president on the defensive.

Donald Trump has been trying to troll Nadler on Twitter in a desperate attempt to defend himself against the charges outlined in the articles of impeachment that the House Judiciary Committee issued on Tuesday. Tweeting “WITCH HUNT!” again and again isn’t much of a response to Nadler’s calm detailing of two articles of impeachment—for abuse of power and obstructing a congressional inquiry—during the morning’s press conference.

The New York Democrat explained the first article by saying, “It is an impeachable offense for the president to exercise the powers of his public office to obtain an improper personal benefit while ignoring or injuring the national interest. That is exactly what President Trump did when he solicited and pressured Ukraine to interfere in our 2020 presidential election.”

He explained the second by saying, “A president who declares himself above accountability, above the American people and above Congress’s power of impeachment—which is meant to protect against threats to our democratic institutions—is the president who sees himself as above the law.”

On one of the most dramatic days in American political history, Nadler was the steady voice of reason. The congressman has, from the beginning of the impeachment inquiry, approached the challenging work of holding a president to account in a deliberate and lawyerly manner. He is, at once, thoughtful and thought-provoking. That’s effective, because impeachment must be framed as a serious response to a serious problem: the constitutional cure for a constitutional crisis. It is also effective because, in every sense, the veteran representative is the exact opposite of Trump.

There are still honest debates to be had about the narrowness of the inquiry; for my part, I would have preferred that there be more articles focusing on obstruction of justice and on violations of the emoluments clause. And there will be continued quibbling about timing and a host of other issues.

But the fact is that even as Trump was ranting and raving about how he had done “NOTHING wrong” and dismissing impeachment as “sheer Political Madness,” he was paying close attention to everything Nadler was saying. The president revealed his obsession with the Judiciary chair on Tuesday, noting that “Nadler just said that I ‘pressured Ukraine to interfere in our 2020 Election.’” Trump griped that the charge was “ridiculous” and claimed that the congressman “knows that is not true.”

Nadler knows nothing of the sort. Nor does anyone else who has paid honest attention to the revelations regarding Trump’s July 25 phone call to Ukrainian President Volodymyr Zelensky. As Public Citizen’s Lisa Gilbert said Tuesday: “These articles cut right to the core of the high crimes and misdemeanors that make this impeachment completely justified. Trump straightforwardly used his public office to obtain a personal benefit, ignoring national interest when he pressured Ukraine to interfere in our next presidential election. He then loudly declared himself above the law and the power of impeachment with unprecedented obstruction of Congress as lawmakers sought to investigate this malfeasance.”

Trump wants Americans to reject the reality that has been detailed in the “transcript” the president himself released, in his public statements, and in the testimony of his own aides.

The facts are the facts. Nadler is stating them well and fostering a sense of urgency by detailing “Trump’s efforts to solicit foreign interference in the 2020 elections.” No matter how desperate the president becomes, no matter how wildly he tweets, the bottom line is being stated by a congressman who recognizes his responsibility to check and balance a president who has “threatened the integrity of our elections.”

“Elections are the cornerstone of democracy and are foundational to the rule of law. But the integrity of our next election is at risk from a President who has already sought foreign interference in the 2016 and 2020 elections, and who consistently puts himself above country,” says Nadler. “That is why we must act now.”