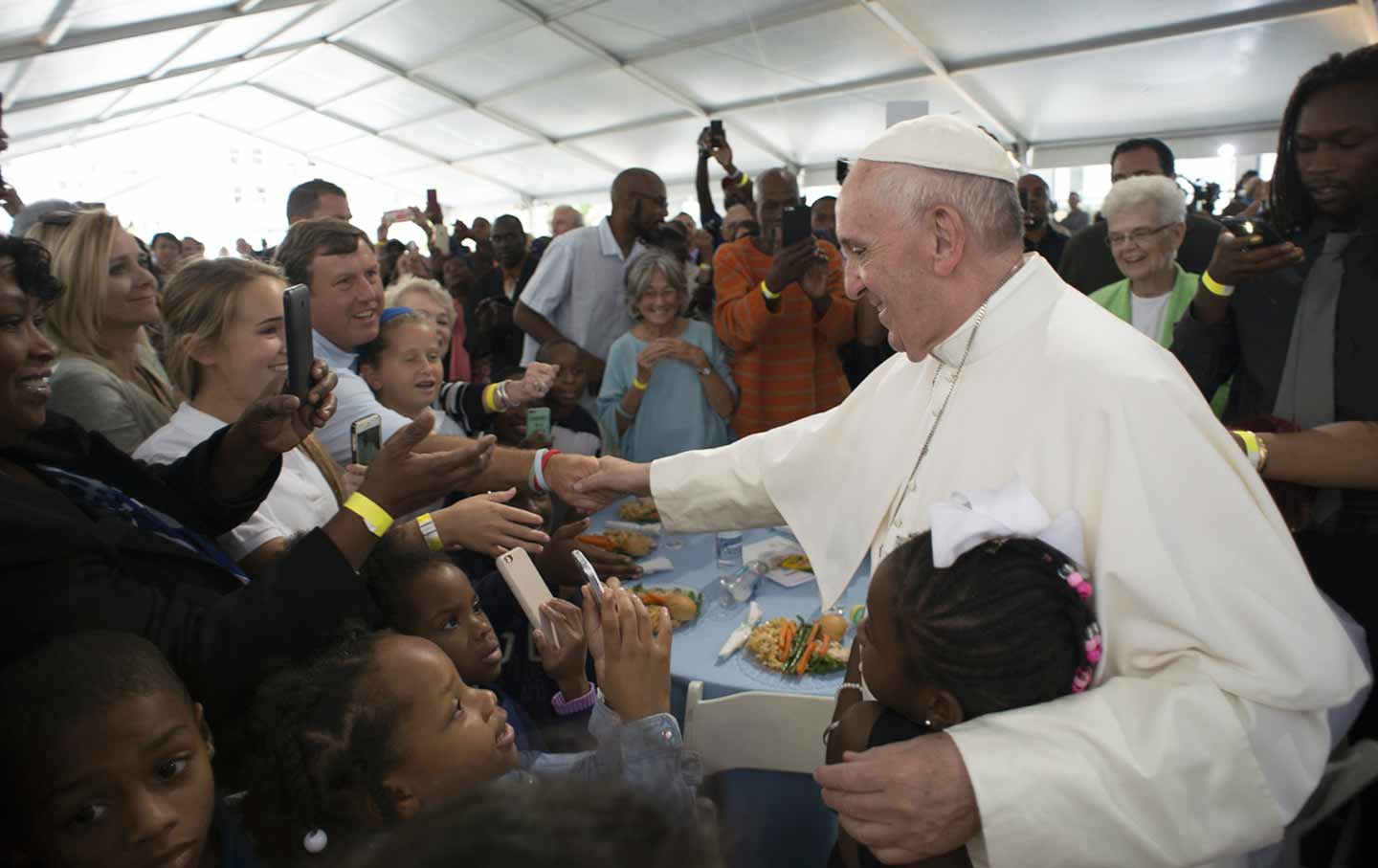 Pope Francis is greeted at a lunch for homeless people who are regularly fed by Catholic Charities, at St. Patrick’s Church in Washington, DC, on September 24, 2015. (L'Osservatore Romano / Pool Photo via AP)

So Mr. Sanders goes to the Vatican. This is no parody of Frank Capra’s 1939 movie. It is happening for real, in the middle of a hard-fought campaign for the Democratic presidential nomination, and only a few days before the crucial New York primary.

This unexpected move is intriguing. What Sanders is looking for at the Vatican is rather obscure at first sight. First, he is very unlikely to meet with Pope Francis, who has no desire to infringe upon the US presidential elections further than his line about Donald Trump’s capabilities as construction builder and promoter (“A person who thinks only about building walls, wherever they may be, and not building bridges, is not Christian”; February 17).

Second, Sanders was not invited by Pope Francis or the Vatican government per se but by the equivalent of the Vatican’s think tank on economic and social matters, the prestigious Pontifical Academy of Social Sciences. It’s as if Jefferson Smith wanted to address a joint session of Congress, but ended up talking to a mix of the Brookings Institution and the New America Foundation.

Third, as a speaker, Sanders will share the company of South American leaders who, among other things, are not role models in terms of democracy, respect for the environment, or for the United States of America: Ecuadorean President Rafael Correa and Bolivian President Evo Morales have very mixed track records in these categories. Correa has authorized large-scale oil-drilling operations at Yasuni National Park, displacing thousands of Indian families and destroying biodiversity in the sanctuary of Amazonia. That’s not exactly paying respect or homage to Pope Francis’s Laudato si’ encyclical on the environment. Morales, for his part, another enthusiastic supporter of Hugo Chávez who, like Correa, has made repeated attempts to change the Constitution to prolong his tenure ad infinitum, can claim significant victories in his battle for growth and against poverty. But they have been won mainly through an intensive campaign to drill wherever possible. Mining exports almost quadrupled within eight years, while major lakes, like Lake Poopó, were depleted of their water, thereby impoverishing and displacing the poorer and more vulnerable parts of the Bolivian population. Drill, baby, drill.

So, why on earth—and in Heaven?—is Sanders going to the Vatican? Is he looking to kiss Pope Francis’s ring? Is he looking for a papal blessing for his campaign? Or will his presence in the Vatican’s many chapels and antechambers be as incongruous as Jefferson Smith’s bumbling and fidgeting his way through the corridors of DC?

There is actually more to it. Despite his Jewish background, Sanders seems to have found an echo, if not an inspiration, in the Catholic Church’s social teachings regarding the economy and money, and how they should work for the human beings rather than the reverse.

The Church’s teachings against inequality were institutionalized in the late 19th century, a period much like our own.

For a Catholic, these teachings are not new business. They stem directly from the Gospels, including the only scene in the life of Jesus Christ when he uses physical violence (whipping merchants and traders who had established their counters in a temple) as well as, among others, the absolute interdiction that “no one can serve two masters. Either you will hate the one and love the other, or you will be devoted to the one and despise the other. You cannot serve both God and money” (Matthew 6:24).

The Catholic social teachings formally emerged as such at the end of the 19th century, a period that should look familiar: At that time an industrial revolution was accompanied by swift financialization, creating vast amounts of new wealth and new job opportunities for those able to ride the wave. But it also destroyed traditional jobs, displacing populations in extremely brutal ways and concentrating wealth disproportionately at the top. No wonder this industrial revolution created tensions and violence that led to political revolutions across Europe.

Are we not living in a similar moment, with the Uber-ization of over-financialized economies?

In 1891, the Catholic Church published Rerum novarum, a major encyclical that paved the way for future teachings in the economic area. Senator Sanders will come to the Vatican to celebrate the 25th anniversary of one of these texts, Centesimus annus, which, among other things, reaffirmed not only the right to private property (§6), but the dignity and rights of the worker (§3), the right to establish workers’ unions (§6), and the right to a just wage (§8), etc. Classic Bernie, isn’t it?

And what about these more recent lines, which stem from old teachings: “Today, everything comes under the laws of competition and the survival of the fittest, where the powerful feed upon the powerless. As a consequence, masses of people find themselves excluded and marginalized: without work, without possibilities, without any means of escape.… We have created a ‘throwaway’ culture which is now spreading.” This is Pope Francis, writing in his 2013 Evangelii gaudium apostolic exhortation, which paved the way for his encyclical on the environment, Laudato si’. In Evangelii, Francis ridicules trickle-down economics, a grotesque farce serving the top of the pyramid. “While the earnings of a minority are growing exponentially, so too is the gap separating the majority from the prosperity enjoyed by those happy few.”

Senator Elizabeth Warren, speaking at Boston College on April 8, gave numbers to this very American and relatively recent reality: From 1980 to 2015, nearly 100 percent of income growth has gone to the top 10 percent. Only tiny drops are left for the bulk of the population.

I am not Bernie Sanders’s speechwriter. I happen to be helping a new French political figure, Emmanuel Macron, 38—now minister of the economy, industry, and digital affairs in the government of Prime Minister Manuel Valls—become a future French president. I therefore do not despise the value of fundraising or the commitments of donors, be they large or small, in an election campaign. In France, those amounts are capped by law at about $25 million per candidate. Applied to the United States in proportion to GDP, this would represent a $150 million limit for each US presidential candidate. Beyond a certain limit, money is not a form of speech; it is an instrument of domination.

I do not know what Sanders will say to this Pontifical Academy. But I know one thing, from having actively supported Pope Francis’ US trip. There is one sentence Francis wrote but dared not express during his speech to the US Congress. That sentence was: Politics “cannot be a slave to the economy and finance.” We don’t know who the next US president will be, but I hope that Sanders pronounces this sentence loudly enough so that he can be heard urbi et orbi.

In the challenges the world is facing today, from extremism to violence and the next financial crisis, the last thing we need is an American democracy still enslaved by the powers of money. The land of the free deserves better. If Sanders goes to the Vatican to hammer this point, it might be a counterintuitive campaign move, but he will find a friendly and supportive audience there.