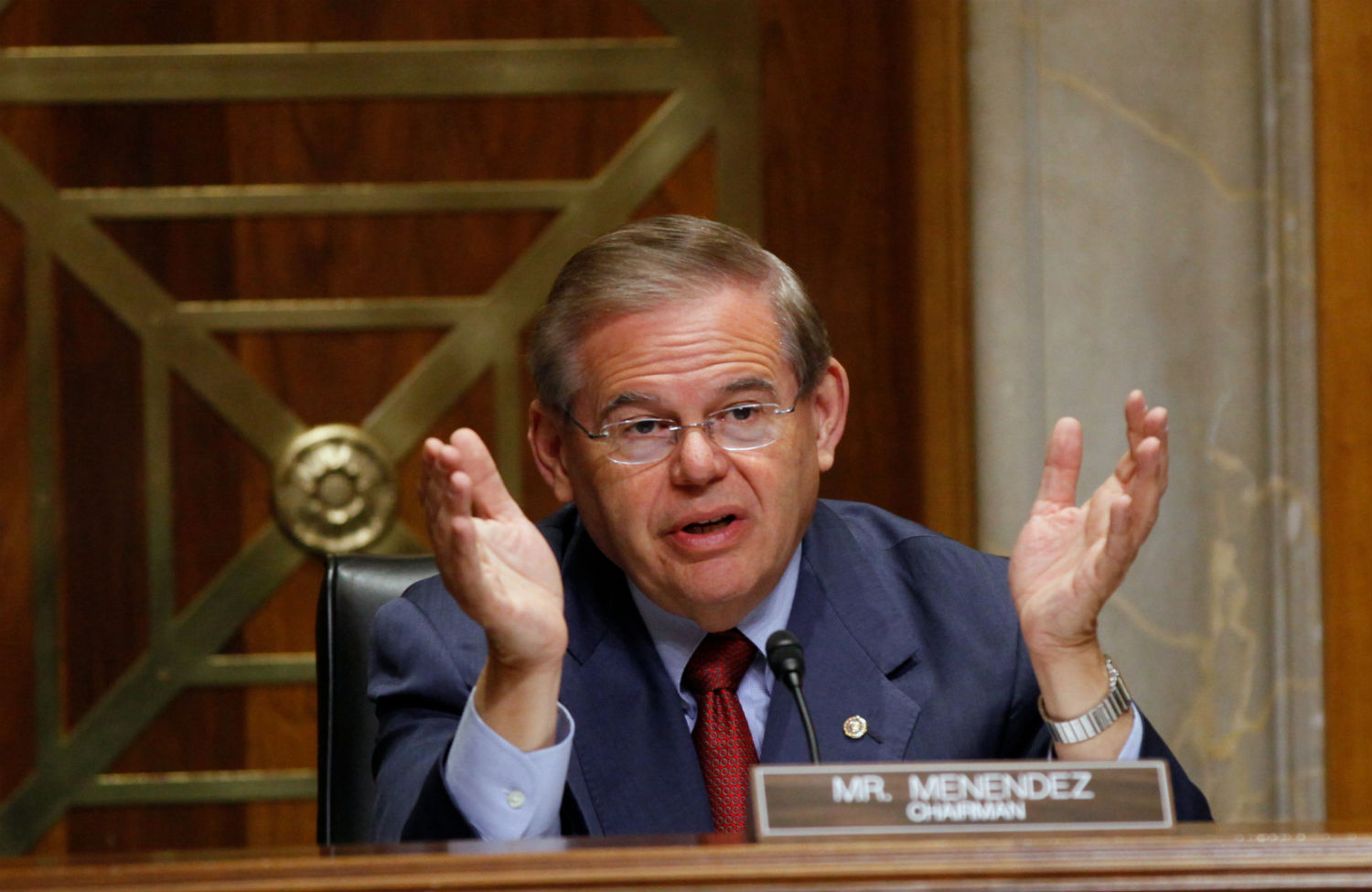 Until last week, New Jersey Democratic Senator Robert Menendez, chairman of the Senate Foreign Relations Committee, was relatively untouchable among Democrats, while holding virtual veto power over US Cuba policy and being a military hawk on US policies towards Syria, Iran and Venezuela.

Now Menendez’s grip is weakened by revelations that his very close friend Miami opthalmologist Saloman Melgen topped the country in Medicare fraud, and funneled $700,000 in campaign contributions through a Democratic Super PAC, nearly all of which were channeled right back to the Menendez re-election campaign in 2012. Melgen ripped off $21 million in Medicare reimbursements that year alone by over-prescribing a medication for vision loss among seniors.

A key question is whether Senate leader Harry Reid, whose close former aides run the Majority PAC for Senate Democrats, will aggressively investigate ethics violations, diminish Menendez’s Senate standing, or risk his party‘s association with the scandal by circling the wagons.

Federal investigations, including two raids on Dr. Melgen’s clinics, already have revealed that Menendez interceded with Medicare officials on his friend’s behalf in 2009 and 2011. Menendez is still under scrutiny by the Obama Justice Department. Menendez acknowledges traveling several times on Melgen’s private jet and staying at the eye doctor’s posh estate in the Dominican Republic. Menendez was forced to reimburse $58,500 for the costs of those trips when the information was disclosed in 2010.

The important back story in the Menendez-Melger case is that US Cuba policy is at stake.

The Cuban-American Menendez is a fierce lifetime opponent of any easing of tensions with Havana. As a top fundraiser and the Democratic chairman of the key foreign relations committee, Menendez is an obstacle to Obama and Senate liberals on a range of national security policies. He favors regime change through military or covert means in Syria, Iran, Venezuela and, of course, Cuba. He has the power to set bills, hold hearings and approve or deny administration nominations. Menendez is becoming Obama’s chief domestic obstacle in normalizing relations with Cuba. Even on an administration priority like immigration reform, Menendez (and Senator Marco Rubio) have pledged their votes only on the condition that their hardline position on Cuba is heeded.

Now that Menendez’s grip on power is weakened, the only question is by how much.

Only a few years ago Menendez, chairing the Senate Democrats’ campaign committee, raised hell when one of the party’s biggest fundraisers, Hollywood’s Andy Spahn, tried raising funds for candidates who supported a new Cuba policy. Spahn, who travels often to Cuba with American politicians and Hollywood producers like Steven Spielberg, was demonized by Menendez and shut down. But Spahn today remains as one of Obama’s top fundraisers, and actively supports lifting the embargo.

This year an even sharper split erupted in the Senate between Menendez and Senator Patrick Leahy who is making a top priority of achieving a new Cuban policy. Leahy, who engages in steady, behind-the-scenes dialogue with Cuban officials, obtained sixty-six Senate signatures on a December 2013 letter to Obama calling on the president to “act expeditiously to take whatever steps are in the national interest” to obtain the release of American citizen Alan Gross. Gross is a contractor for the US Agency for International Development serving a fifteen-year sentence in Cuba for covertly smuggling high-tech communications equipment into the island. A rival letter sent by Menendez and Rubio calling for Gross’ “immediate and unconditional release” garnered only fourteen votes, an embarrassing setback for Menendez. In the opaque culture of Washington, the Leahy letter was interpreted as political cover for Obama to negotiate diplomatically for Gross’ release, whereas the Menendez letter was a dud.

The Leahy-Menendez feud has deepened further with recent revelations that the AID has operated a secret Twitter program to stir protests in Cuba. Leahy denounces the project as “dumb, dumb, dumb,” while Menendez defends it vigorously.

National Democrats interested in Cuba commonly claim their hands are tied on Cuba because of Menendez’s role. Under the 1997 Helms-Burton legislation, President Bill Clinton delegated to Congress the final say over recognizing Cuba and lifting the embargo, providing the most powerful tool in Menendez’s arsenal until now. For that reason, Obama has pursued gradual progress with Cuba through executive action—like lifting license requirements for travel by Cuban-Americans, which has resulted in a flow of about 500,000 Cuban Americans per year. Obama also is conducting business-like talks with the Cuban regime on immigration, drug enforcement and other state-to-state matters. Obama shook hands with President Raúl Castro at the funeral of Nelson Mandela, angering the Cuban right.

Any ebbing of Menendez’s role will help Obama to take further steps towards normalization. For example, the State Department is considering lifting its designation of Cuba as a “terrorist state.” Such a move would make it much easier for the Cuban government to engage with private banks and firms who now worry about breaching US anti-terrorism laws. While lifting the terrorist label is within the administration’s power, the decision can be challenged by two-thirds of the Senate. With a weakened Menendez, the Senate might go along with Obama and John Kerry.

The surfacing of the Medicare scandal, Melgen’s donations to Menendez and the links between that money and the Senate’s Majority PAC now increase the pressure on Senator Reid and Democrats to distance themselves from Menendez. For Democratic insiders, managing the scandal is a dicey matter, because losing the Senate in November will turn Cuba policy over to the exiles’ latest favorite son, Senator Marco Rubio.

If Democrats are uncomfortable about a nasty fight with one of their own, who will step up? Menendez is not up for election this November. Republicans who agree with his right-wing foreign policies may like him where he is. Where are New Jersey Democrats? For many years the liberal focus against the Cuban right has centered on Miami, not so much on the enclave of right-wing Cubans in Union City. The recent liberal obsession about New Jersey has been about Republican governor Chris Christie, not Democratic senator Menendez. The uproar over Christie, while fully justifiable, is easier politically than Democrats taking on a leader of their own party. But while causing traffic jams on an interstate bridge is an outrage, how does it compare with a lone senator flouting his own president, fomenting US military interventions and sabotaging a possible bridge to Cuba? Time will tell.

Editor’s Note: This story has been corrected to reflect the fact that Senator Menendez is Cuban-American, not Cuban-born.