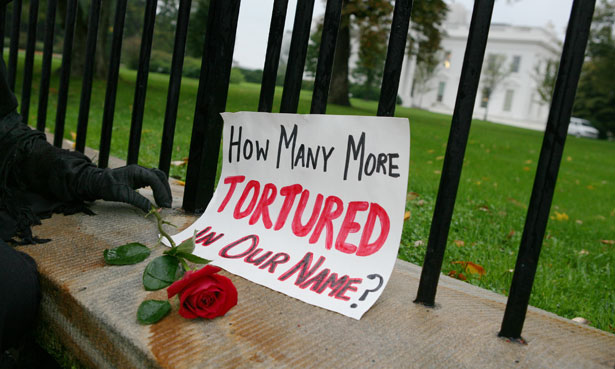 A central player in the Bush-Cheney’s torture program is Jose A. Rodriguez, who, according to The New York Times, was then the head of the CIA’s Counterterrorism Center during the worst of the barbarity—the rectal hummus flushes, drills, dogs, broken limbs, sexual humiliation and assault, sleep deprivation, intense heat, intense cold, blood thinners, beatings and deaths from exposure. When agents in the field began sending e-mails to voice dismay, Rodriguez told them to shut up: “Strongly urge that any speculative language as to the legality of given activities or, more precisely, judgment calls as to their legality vis-à-vis operational guidelines for this activity agreed upon and vetted at the most senior levels of the agency, be refrained from in written traffic (email or cable traffic).” “Such language is not helpful,” he said. Rodriguez was involved in an earlier scandal regarding Bush-Cheney torture, fingered for destroying “videotapes recording the interrogations of top al Qaeda operatives.”

Rodriguez was born in Puerto Rico and joined the CIA in 1976. Nineteen seventy-six was a key year in the evolution of the national security state—the high point of congressional efforts to rein in the imperial presidency (Gerald Ford was forced to sign his “no assassinations of foreign leaders’ pledge that year) and the start of the New Right’s efforts to build a workaround those regulations (i.e., Iran/Contra). Rodriguez spent most of his career in Latin America, bridging the Cold War and the war on drugs. His background is sketchy—there’s not too much public information on what he was doing where in Latin America and his autobiography is vague. According to the The Wall Street Journal, Rodriguez “is a product of what one former agency colleague called ‘the rough and tumble’ Latin American division, which was responsible for thwarting Russian aggression in that part of the world. That strategy eventually evolved into the Iran/Contra scandal.” The Latin American Division was thick into Iran/Contra, and Rodriguez was involved in Panama when Noriega was in charge, that is, at the height of the scandal. He was in Mexico in 1990, where he served as CIA station chief at the beginning of that country’s descent into narco-NAFTA madness.

After 9/11, he was tapped by the CIA to manage its torture program—even though he didn’t speak Arabic and had no experience in the Middle East. He apparently had other talents. Mark Mazzetti in the Times writes that he “won praise while in the job for an aggressive strategy to capture, detain and interrogate leaders of Al Qaeda.” Rodriguez’s promotion to a top slot in Washington’s torture program is a pretty stark example of Latin America’s serving as “empire’s workshop.” Elsewhere, I’ve given an overview of the torture techniques the United States helped work out in Latin America during the Cold War (as have others, including Patrice McSherry here). These included waterboarding, a technique called, in Spanish, “el submarino.” (After a 1992 investigation, the Pentagon destroyed copies of the seven infamous torture instruction manuals it had used to train Latin American allies; Marcy Wheeler, though, writes that Dick Cheney and his legal counsel, David Addington “saved the only known copies” for their personal files).

More recently, though, with the return of the Latin American left to political power, the region has refused to participate in Bush-Cheney-Rumsfeld’s global torture archipelago, that is, its extraordinary rendition program, which implicated every region of the globe, even peace-loving Scandinavia, except South America.

As for Rodriguez, after he retired from the CIA he went private, walking through that “revolving door” that connects Langley to any one of those Virginia-based private security companies (Blackwater apparently recruited him, but he chose another firm). In any case, he is back in the public eye, writing one op-ed after another defending torture. “I know it worked,” he insists, contrary to critics who say that forced rectal flushing garnered no serviceable intelligence. He’s joined other former CIA officials to set up a webpage to push back on criticism: CIASavedLives.com.

Considering Rodriguez’s background in Latin America, and reading about the techniques he helped take global after 9/11, revisiting those awful photographs, and learning of the role doctors played in carrying out the torture, I think of the epigraph that I used to open Empire’s Workshop, from Mary Shelley’s Frankenstein:

I kept my workshop of filthy creation: my eyeballs were starting from their sockets in attending to the details of my employment. The dissecting room and the slaughterhouse furnished many of my materials; and often did my human nature turn with loathing from my occupation, whilst, still urged on by an eagerness which perpetually increased, I brought my work near to a conclusion.

But witnessing the cowardice of those who know torture is a crime against humanity but say we have to move on, and the moral idiocy of those who insist we were forced to do it, even as they chant we are “awesome,” just “awesome,” I also think of this other line from Shelley, spoken by the creature: “I was benevolent and good—misery made me a fiend. Make me happy, and I shall again be virtuous.”

UPDATE—Thursday, Dec. 11, 2:00 pm: Two things: 1. The Senate Report specifically mentions those instructions manuals (and their use in Latin America) that Cheney kept for himself on page 19. 2. Brazil’s National Truth Commission just released its own report on political terror, which states that more than 300 members of the Brazilian military had received training by the United States in both the “theory and practice of torture.” Among those they applied their lessons on when they got home was the current president of the country, Dilma Rousseff, who in the 1970s “spent three years behind bars, where interrogators repeatedly tortured her with electric shocks to her feet and ears, and forced her into the pau de arara, or parrot’s perch, in which victims are suspended upside down naked, from a stick, with bound wrists and ankles.”