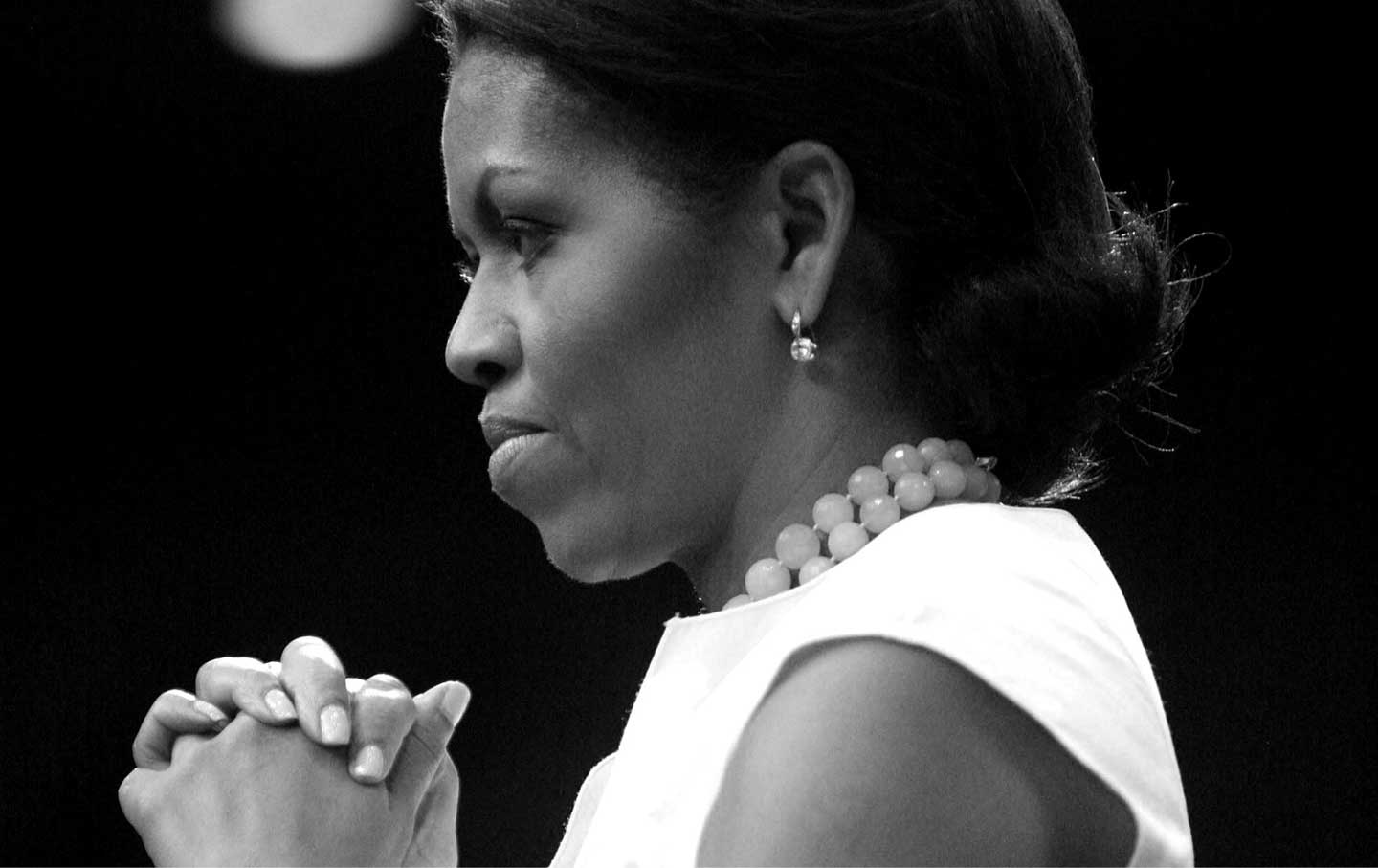 As first lady, Michelle Obama stood at the intersection of Americans’ greatest aspirations and deepest anxieties.

“Was I too loud or too angry or too emasculating? Or was I too soft, too much of a mom, not enough of a career woman?”
—Michelle Obama, to a crowd of black college graduates at Tuskegee University in 20151

From the Archives: “Mad About Michelle” by Katha Pollitt, from the April 20, 2009, issue of The Nation.

Many of us remember the New Yorker cover from 2008: A cartoon Michelle Obama fist-bumping her turban-clad husband, her hair in an Afro. She was drawn as a militant figure in combat boots and a black shirt, a machine gun slung over her shoulder. This cover illustrated the fear and racism that the soon-to-be first lady confronted on the campaign trail in 2008. While Michelle Obama was initially maligned for being too radical, too aggressive, or, as I interpreted it, too strong, she has since become one of the most popular figures in American politics. In a Gallup poll this past August, she enjoyed a 64 percent approval rating, significantly higher than either spouse featured in the 2016 presidential campaign. (Michelle polled higher on average than Hillary Clinton did as first lady, though, notably, lower than both Laura and Barbara Bush.)2

How has Michelle Obama stayed popular when so many Americans consider being political and black controversial? Over the last decade, she has transformed her image from one meeting the harshest stereotypes of black women into one that has broad appeal. She has assembled a public face that inspires deep emotions in women across America, while remaining particularly important for black women.3

At the heart of my own feelings about Michelle Obama is the tension between respectability and the authentic representation of self. This push-and-pull defines many black women in the public sphere—yet none have struck a balance between them under more scrutiny and to greater effect than the first lady.4

Obama Did Not Fail Us—We Failed Each Other

Respectability emanates from the portraits of her seemingly perfect family, her (mostly) uncontroversial initiatives, her beautiful clothing, her hair “laid like the Indian Ocean”—all curated in a way that allows her to navigate the politics of a nation that still hasn’t dealt with its racist history, institutions, and expectations. It is power via assimilation.5

Representation, in turn, lives in the moments when she pulls back the curtains of comfort and respectability and reveals a political, social, and economic truth that we all experience as black women. When she speaks as a career woman who combatted racism to make it through school; when she talks about the life prospects of young black girls in inner-city Chicago; when she draws on her personal story, Michelle Obama strikes a nerve that resonates with my own experience and that of many others. These aren’t the moments that make her politically popular with two-thirds of Americans. These are moments made possible by her respectability.6

As a young black woman who spends a lot of time navigating predominantly white spaces and institutions, I have a deep appreciation and a deep distaste for the politics of respectability. On the one hand, it can be used to achieve important ends by making people comfortable with me and, by extension, with my ideas. If I walk into a mostly white conference with pressed hair and a sheath dress, I’m more likely to be heard and approached than if I walk in with a wash-and-go. On the other hand, one can use respectability to smuggle in authentic truths about the black experience—but only so much of that truth. One can talk about bringing diverse voices into elected office, for example. But talking about how that government body sustains itself by extracting money from and exacting violence on people of color questions the institution itself. It is, therefore: not respectable. We see this even in Michelle Obama’s balance of respectability and representation. Although the first lady has used her platform to highlight the real stories of black women and girls, if she were to push for policy change around racial equity in the education system, it would create too much of a backlash to succeed.8

Respectability is a tactic that many black female power brokers adopt in order to gain clout and leverage in politics and industry. We spend hundreds of dollars a year to press and relax our hair, dress in the uniform of the middle and upper class, and adopt the appropriate pastimes of an elite we hope to join. Many women have paved the path for future generations by using the tension between respectability and representation to advance.9

Yet my own generation hasn’t embraced this strategy in quite the same way. The Movement for Black Lives is transforming the way we build our own agency. We seek political and cultural power through authentic representation more than through respectability. Some of the most prominent young leaders today have refused to create a mainstream image for themselves. Activists wear the clothing that fits their own identity and experience. We wear shirts that say “Black Thighs Matter,” and we elevate non-mainstream leaders like Assata Shakur in order to counter the stereotypes about what is worth celebrating in our blackness. The natural-hair movement is alive and well with young black women. Young black folks are shunning gender norms; even in our activism, we elevate stories and narratives that buck the norm of respectability. We are not perfect, but our lives still matter. We are no longer looking for a Rosa Parks to be a symbol of our values; we’re celebrating Claudette Colvin too.10

Through the power of movements and non-hierarchical tools like social media, alternative narratives have begun to break through the firewall put up by mainstream gatekeepers. But this opportunity for authentic representation hasn’t come out of nowhere. Women before us, including Michelle Obama, have created, through their use of respectability, space for other black voices within the public sphere. Likewise, the tension between respectability and authentic representation isn’t new: Assata Shakur, Angela Davis, Elaine Brown, and many others planted the seeds from which the unapologetic activism we see today has sprung forth.11

Now movements are encouraging establishment black voices to permanently break free of the boundaries of respectability and speak a more authentic truth. Consider Michelle Obama’s speech to the Democratic National Convention this past July. Respectability was manifest in her image as first lady, her coiffed hair and classic dress, allowing that image to reach and be welcomed into living rooms across the country. Representation lives in the following quote from the end of her speech, a raw truth felt by many black Americans:12

That is the story of this country, the story that has brought me to this stage tonight, the story of generations of people who felt the lash of bondage, the shame of servitude, the sting of segregation, but who kept on striving and hoping and doing what needed to be done so that today I wake up every morning in a house that was built by slaves.13