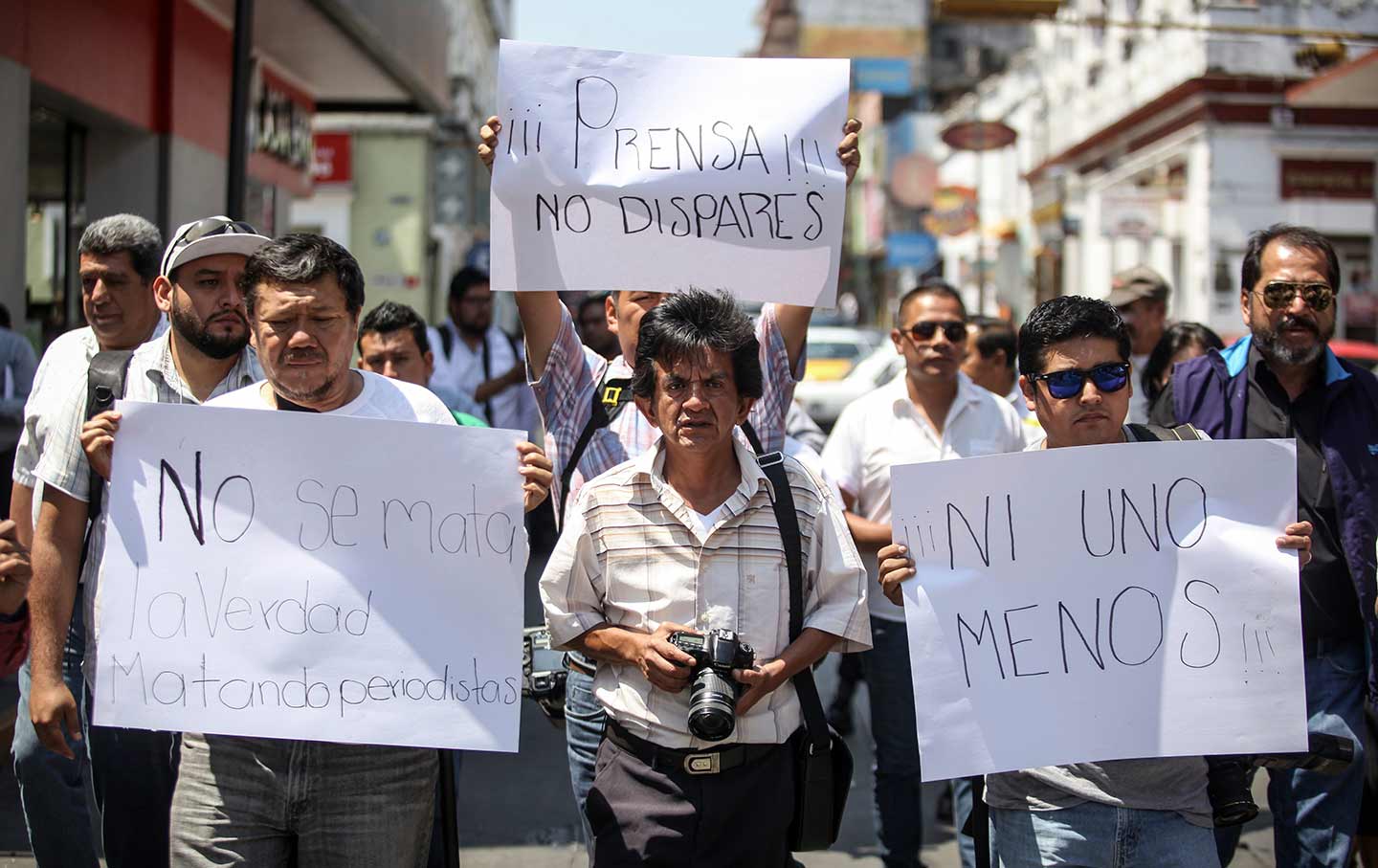 In the city of Córdoba in Veracruz, March 20, 2017, journalists demand justice after the killing of reporter Ricardo Monliu. (AP Photo / Felix Marquez)

Mexico’s “drug war” is the second-most-lethal conflict on earth, according to this year’s “Armed Conflict Survey,” conducted by the International Institute for Strategic Studies, with 23,000 fatalities, more than Iraq and Afghanistan and behind only Syria’s 50,000 killed. If Guatemala, Honduras, and El Salvador are included—and they should be, as part of a unified catastrophe of free-market economics and militarized public security—the death toll rises to 39,000.

The headlines reporting the survey have all blamed the “cartels,” but I put “drug war” in scare quotes because the conflict goes well beyond illegal narcotics. It’s a war against journalists. “Mexico is one of the worst countries in the world to be a journalist today,” according to a New York Times article titled “In Mexico, ‘It’s Easy to Kill a Journalist.’” “At least 104 journalists have been murdered in this country since 2000, while 25 others have disappeared, presumed dead.” And it’s not primarily the cartels doing the killing: “according to government data, public servants like mayors and police officers have threatened journalists more often than drug cartels, petty criminals or anyone else in recent years.… Cases include journalists tortured or killed at the behest of mayors, reporters beaten by armed men in their newsrooms on the order of local officials, and police officers threatening to kill journalists for covering the news.”

Don’t Expect Mexico’s Elites to Stand Up to Trump

How the Mexican Drug Trade Thrives on Free Trade

Why the Children Fleeing Central America Will Not Stop Coming

It’s a war against environmentalists, too: In January, an indigenous anti-deforestation activist, Isidro Baldenegro López, who won the Goldman Environmental Prize—the same award given to Honduran activist Berta Cáceres before her murder—was executed in Chihuahua. “Mexico has emerged as one of the most perilous countries” for environmental activists, writes Newsweek. “Organized crime, state-sanctioned intimidation and near-total impunity have proved to be a hazardous and often deadly combination for the many activists trying to protect the country’s natural resources. In January, Mexico’s Center for Environmental Rights (CEMDA) released a report that documented 63 attacks against environmental activists in 2015 and 2016. However, this only included cases reported on by the media or other NGOs, so the number could be much higher.” It’s a war against students, including the 43 who were disappeared one night in September 2014. It’s a war against teachers. And against the refugees who pour out of Central America and Mexico. All told, since 2007, some 200,000 Mexicans have been killed in the “drug war.”

I’ve written, here for example, how the combined effects of Plan Colombia, NAFTA, CAFTA, the militarization of the US-Mexican border, and other Washington-backed regional military and economic integration initiatives have created a “perfect machine of perpetual war.” That machine chugs on. The death toll was significantly higher in 2016 than it was in 2015, according to the IISS report cited above. Policy and opinion makers tend to focus on one or another piece of the crisis, on drugs or trade policy, but resist seeing the totality of what Dawn Paley calls “drug war capitalism.” To get a sense of how the pieces fit together—how financial liberalization, intensified resource extraction, skewed trade policies, a punishing migration regime, the criminalization of protest, the militarization of social policy, and the promotion of biofuels, all underwritten by a ceaseless flow of US military aid—read Christy Thornton, Adam Goodman, Anabel Hernández, and Óscar Martínez (including this report published in The Nation), among others. Also read NACLA. The United States got Donald Trump as a consequence of decades of failed, bipartisan economic and military policies. Mexico and Central America got a mountain of corpses that is getting higher by the day.

Correction: An earlier version of this article gave the wrong month for the disappearance of the Ayotzinapa students. They were disappeared in September 2014, not October 2014.