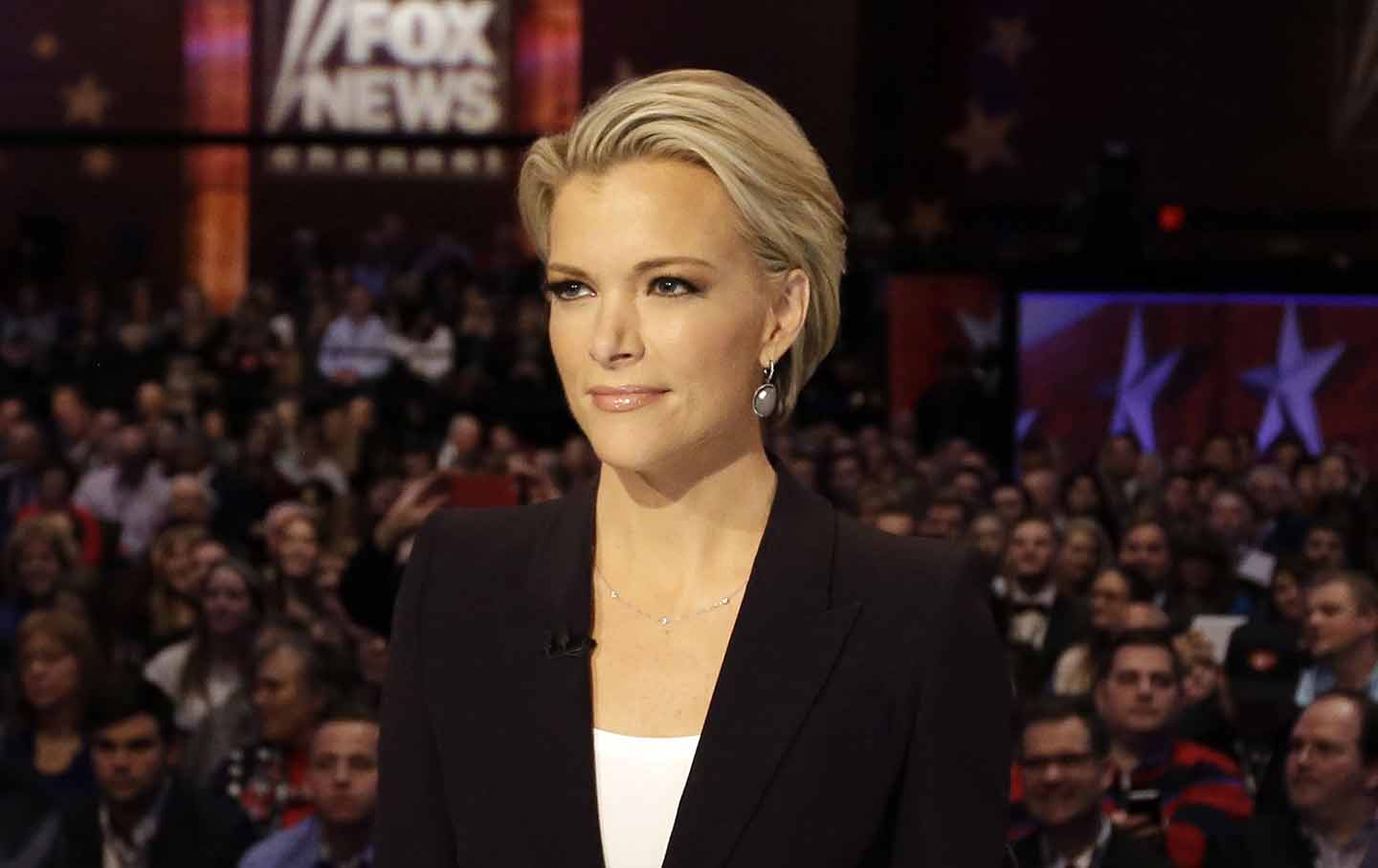 The last time Megyn Kelly got this much attention was August 2015, when Donald Trump hit her with a misogynist rant after the presidential debate, saying, “You could see there was blood coming out of her eyes, blood coming out of her wherever.” Then, as her contract with Fox News was winding down, the Roger Ailes situation got sticky and, within months, she had bailed on the network that had propelled her to superstar status.

Kelly promptly engaged in some terrifically creative image-management. She pitched herself to the world as an “independent voice,” a woman who bravely raises her chin to ask “hard questions” of “both sides.” An autobiography, Settle for More, was part of the repackaging. In a last-minute addition to the book, she shared the details of how she too had been targeted for sexual harassment by Roger Ailes. She landed on her feet, as a heroine does, with a top spot on NBC News.

For a moment there, Megyn Kelly was everything a lot of Americans wanted their daughters to be: a doughty female staking her claim in a testosterone-filled world.

Let’s drop the female-empowerment narrative for Kelly, and substitute a more accurate one.

After her first appearance on NBC, an interview with Vladimir Putin, she announced she would be interviewing Alex Jones, the conspiracy theorist and Sandy Hook denier whose accomplishments include, among other things, pushing the lie that a DC pizza restaurant was a cover for a child sex ring. Alex Jones’s lies are so depraved they do not merit the energy required to refute them.

The blowback against Kelly, and NBC News, was immediate. Multiple advertisers, including JPMorgan Chase, withdrew from the show, and Kelly was dropped as a host for Promise Champions Gala, an annual event for the Sandy Hook Promise Foundation, a nonprofit gun-violence-prevention group founded by family members of some of the victims of Sandy Hook shootings. Kelly responded that that she wished to “shine a light—as journalists are supposed to do—on this influential figure.”

But on Friday morning, Alex Jones released a secret recording of his pregame conversation with Kelly in which she told him he is a “fascinating” individual, that she had no intention of conducting a “gotcha” interview or portraying him as a “some boogeyman,” and that “my goal is for your listeners, and the left…to say, wow, that was really interesting.” So the only “light” that our independent journalist seems interested in shining is the one that will draw the most attention—and ratings—and if that means upgrading a loathsome conspiracy theorist to the dignity of a national figure, so be it.

There isn’t much subtlety in Kelly’s game plan. Having helped elevate Trump to the highest office, Fox News appears to be losing both its ratings and its sense of purpose. The Fox audience is up for grabs, and that is the audience it seems our determined heroine wants for herself. Censure of Kelly over the Alex Jones interview will win her the loyalty of that group because it feeds into their culture of grievance and resentment. (Or, at least, that may have been the theory before Jones went rogue and began attacking Kelly’s interview as a “fraud.”) Having played that culture like a fiddle for so many years, Kelly knows how to carry the tune.

If you just go back and look at Kelly’s professional résumé with clear eyes, it’s all there from the beginning. On page 38 of her autobiography, Kelly writes, “The one thing I cannot and will not tolerate is a bully.” Yet, on page 175, she calls Bill O’Reilly “a saint,” and on page 132 she compliments Sean Hannity as “great about any incoming negativity.”

It takes a certain type of person to succeed as a Fox News personality, and Kelly showed that she had the right stuff. When writer Aisha Harris at Slate proposed a racially inclusive version of Christmas, Kelly made a national issue out of it, insisting that, “Santa just is white.” “Jesus is a white man too,” she added. When a police officer assaulted a 14-year-old girl at a pool party in McKinney, Texas, two years ago, Kelly ventured that the child was “no saint either.”

In tune with Fox priorities, she became obsessed with “the New Black Panther Party,” and once asked, “What is the evidence that what happened to Eric Garner and what happened to Michael Brown has anything to do with race?” With segments like “Taking the Religion Out of Christmas” and “Christmas Toy Drive Cancelled,” she invited activists for the separation of church and state onto the show, only to treat them with derision and contempt.

Yes, there was that segment in which she sparred with Bill O’Reilly over whether “white privilege” exists (reminiscent of other great Fox “debates” over issues like climate change). After so many years of race-baiting, it felt like nothing so much as a weak attempt at damage control.

Succeeding at Fox meant adhering to the Roger Ailes dress code: Women were compelled to wear skin-baring outfits on camera, according to former Fox employees. The charitable explanation for Kelly’s participation is that Ailes’s diktats were the price of the job. On page 231 of her autobiography, Kelly recalls a woman at a dinner party asking her, “‘You work for Fox? How do you sleep at night?’ ‘Like a baby,’ I responded. ‘The check clears every week and we provide a service to the nation.’”

But Kelly’s ability to swim in a sea of sexism while barely getting her toes wet preceded her time at Fox. In chapter of her book about her career as a lawyer, titled Legally Blond, she writes, “I didn’t deal with much in the way of sexism.” And yet she tells us that she was “the only female lawyer in our Chicago office.”

Kelly is the beneficiary of the labor of the many women who went before her: the feminist leaders who built up the sexual-harassment laws that eventually took Ailes down; the women who fought for equal rights in the workplace. But you won’t hear Kelly giving them any credit. She rejects the label of feminism, which she caricatures as “divisive,” “exclusionary,” and “a zero-sum game—that assumes that to empower women, we must castrate men.” She seems to intuit that her bread is buttered by a large population of people who are anxious about gender order.

For a dozen years, Kelly allowed others to use her cleverness and polish to cleanse bigots, extremists and demagogues.

So, remind me, how did this propaganda tool become a feminist icon? The main thing she has discovered is a weakness in the mind of Americans: We are suckers for the identity narrative.

We like these narratives because we love bootstraps and underdogs. They validate our individualist leanings. A non-privileged person with gumption makes her own way against the odds. It suggests a transformation of the order. Except that that isn’t always how social progress is actually made. One woman’s success is not always a success for womankind. Real progress requires lots of people working together to help one another; and the bootstrap stories, inspiring as they may be, frequently serve to tell those who haven’t succeeded against the odds that it is all their fault.

So let’s drop the female-empowerment narrative for Kelly, and substitute a more accurate one: For a dozen years, she allowed others to use her cleverness and polish to cleanse bigots, extremists, and demagogues. She was a valuable asset to a network that promoted fake news and reactionary talking points, all of which made the presidency of Donald Trump possible. And now she’s been hired to perform more or less the same role for NBC.

When Trump attacked Kelly, he did her a favor. He allowed Kelly to seem like a hero. Seizing the moment, she used one type of identity politics to try to erase the other type of identity politics she played for so long and which made her such an effective weapon on Fox. A telegenic booster for racism and religious supremacy, and, hey, she’s a woman, so we can’t be sexist, right?

Kelly willingly played along, and we can only trust that she meant it. Because if the only reason she participated in the denigration of people of color and other groups was for ratings and personal gain, it might almost be worse.