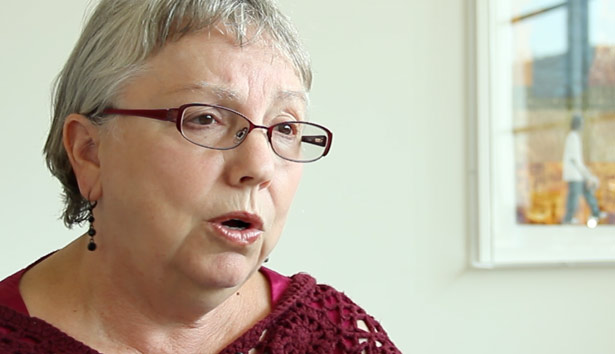 Gayle McLaughlin is serving her second term as mayor of Richmond, California, the first Green Party official to represent a city of more than 100,000. Last year, after a fire at a local Chevron refinery sent 15,000 residents to the hospital, the city sued the company for damages. Now McLaughlin’s advancing a plan to use the city’s eminent domain power to acquire troubled loans so as to stop a new wave of foreclosures. This interview has been edited and condensed. —Laura Flanders

LAURA FLANDERS: You’re just back from Ecuador, where you toured communities that, like Richmond, are in a struggle with Chevron. Isn’t it enough to take on your city’s biggest taxpayer? Why take on the big banks too?

GAYLE McLAUGHLIN: Chevron does pay a lot of taxes. We don’t think it’s nearly enough. We have a right to have safety for our community. That’s why we put forth our lawsuit—to make sure they put our community before their profits. And that’s why we’ve come up with our new program [to help underwater homeowners].

GM: Much of the so-called “relief” has come in the form of short sales, which means more families losing their housing and neighborhoods destabilized. We’re working to keep more families in their homes! The settlement did lead to some more homeowners getting modifications with principal reduction, but the problem has been that the numbers are just too small compared with the scale of the problem. We need a broader market fix that resets mortgages to current home values.

LF: So what’s your plan?

GM: The Richmond CARES program is focused on preventing foreclosures, keeping people in their homes and stabilizing neighborhoods.

LF: You tried to explain it in person to the CEO of Wells Fargo. What happened?

GM. I went with a whole coalition of community organizations to Wells Fargo’s head office. We were making it clear that the banks should negotiate with Richmond. They shouldn’t be taking us to court. The idea was to talk with him and invite him to come see our neighborhoods. They locked their doors and wouldn’t meet.

LF: In addition to a lawsuit from Wells Fargo and Deutsche Bank, the real estate lobby is working against you, and the Federal Housing Finance Agency has threatened sanctions against “any local or state action” that uses eminent domain to restructure mortgage loan contracts. Are you concerned?

GM: We have researched this very thoroughly. First, we have offered to buy the mortgages from the bond owners at fair market value. We’ll have them appraised by a third party. We want to negotiate, but secondly, we have the right to use eminent domain for a public purpose. It’s been used for all the wrong reasons, such as moving people out of their homes for big stores.

LF: What difference does it make that you have groups like the Alliance of Californians for Community Empowerment at your back?

GM: It makes all the difference in the world. We need homeowners involved in designing the program. That’s how we built the movement in Richmond and how we’re extending it to other cities. With all the misinformation put out there by Wall Street, it becomes imperative that we have people sharing the truth and overcoming the false messages put out by the opposition.

LF: Is it good that you’re Green?

GM: It’s the independent thinking that makes the difference. One party is moving us into a brick wall at 100 mph. The other is moving us there at 50 mph. We’re still going in the wrong direction, in my view.

GM: In Richmond we’re solvent, we’ve reduced crime and we have a new General Plan based on sustainability and equity. I’m termed out, and next year we’re going to have a battle on our hands. They’re going to throw a mountain of money against the progressive candidates.

In August, Madeline Ostrander blogged about the protests in Richmond, California, against the Chevron oil refinery.