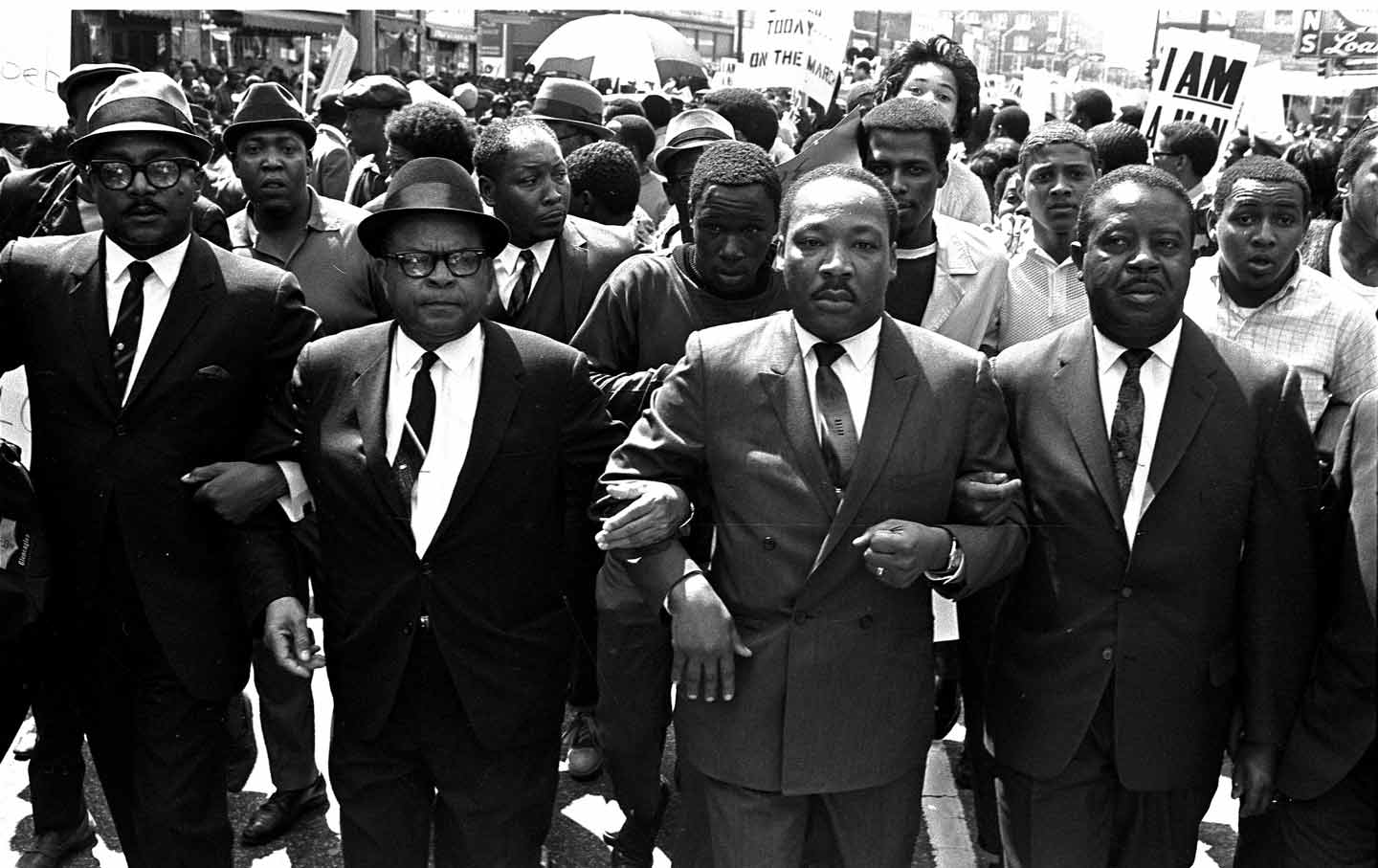 Tavis Smiley is the host and managing editor of Tavis Smiley on PBS and author of Death of a King: The Real Story of Dr. Martin Luther King Jr.’s Final Year, which has just been published in paperback. This interview has been edited and condensed.

Jon Wiener: After King’s speech at Riverside Church in April 1967, where he came out against the war in Vietnam and called the US “the greatest purveyor of violence in the world,” The New York Times called the speech “disastrous, wasteful and self-defeating,” The Washington Post said King had done “a grave injury to his natural allies and even graver to himself,” and Life magazine said it “comes close to betraying the cause.” What was all that like for him?

Martin was depressed at times; sometimes he’d cry himself to sleep. He knew there was a bullet with his name on it.

Tavis Smiley: Martin was depressed at times in that last year, despondent at times; sometimes had to cry himself to sleep. He knew there was a bullet out there with his name on it. He’s catching hell and hate from everybody. Inside his camp, he has to deal with his own board voting to condemn him for coming out against the war. He doesn’t know that his treasurer James Harrison is on the FBI payroll, or that his photographer Ernest Withers is on the FBI payroll. He’s being sold out from the inside, he’s catching hell and hate from the outside; the media is against him, the White House is against him, white America is against him, even black America is against him. And every day he’s trying to find the courage, the commitment, the character to keep trying to tell the truth as he knew it.

How did he deal with it?

He has to pull and pray himself through the depression, the despondency and the mania that he was feeling. In the last year of his life Martin is hospitalized a number of times. The official reason was always “exhaustion.” And to be sure, he was running from pillar to post, on the move all the time.

Listen to Tavis Smiley on the Start Making Sense podcast.

How does he deal with it? One morning he’s on his way out of the house. He gets to the door, the depression hits him, he can’t even get out the door; he goes back and gets into bed, fully dressed, and cries himself to sleep. There’s another night when his doctors have told him he needs to get away for a few days. He goes to Jamaica with some of his staff members. At three in the morning they check on him in the bedroom, and they can’t find him. They’re scared. They are worried about him. They know he’s depressed. When he was a child, at 12 years of age he tried to commit suicide. Finally, they find him on the balcony on the other side—and there’s Martin King at three o’clock in the morning, he’s got his pajamas on, he’s looking out at the ocean, at a huge rock; tears running down his face; and he’s singing, over and over again, that old gospel song, “Rock of ages, cleft for me, let me hide myself in thee.”

The year that began with the furor over King’s Vietnam speech ended of course in Memphis. What was King’s Memphis campaign about?

The Memphis campaign was the test run for a national campaign on poverty. King had not planned that these sanitation workers in Memphis would fight for their rights and demand respect. But sometimes the Lord works in mysterious ways. King was already traveling the country organizing what he called a Poor People’s Campaign. He was going to be the original Occupy—not in New York, but in Washington. He was going to the National Mall, where there now sits a monument honoring him, to set up a tent city. King and thousands of people were going to live on the national mall in tents for as long as they needed until Congress did something about poverty. President Johnson had declared war on poverty, but then launched a much bigger war in Vietnam. King said “war is the enemy of the poor.” King said—and I love this—“budgets are moral documents.”

So Memphis becomes a jumping off point for the national campaign. Against the advice of all of his staff, King says “we’re going to Memphis.” The first march there ended in violence. He said “we’re going back, and we’re going to do it right.” Of course King was assassinated [on April 4, 1968] before that second march happened. They went through with it anyway; Coretta continued that fight.

You’ve written something like 16 books—what was it like for you to write this one about King’s final year?