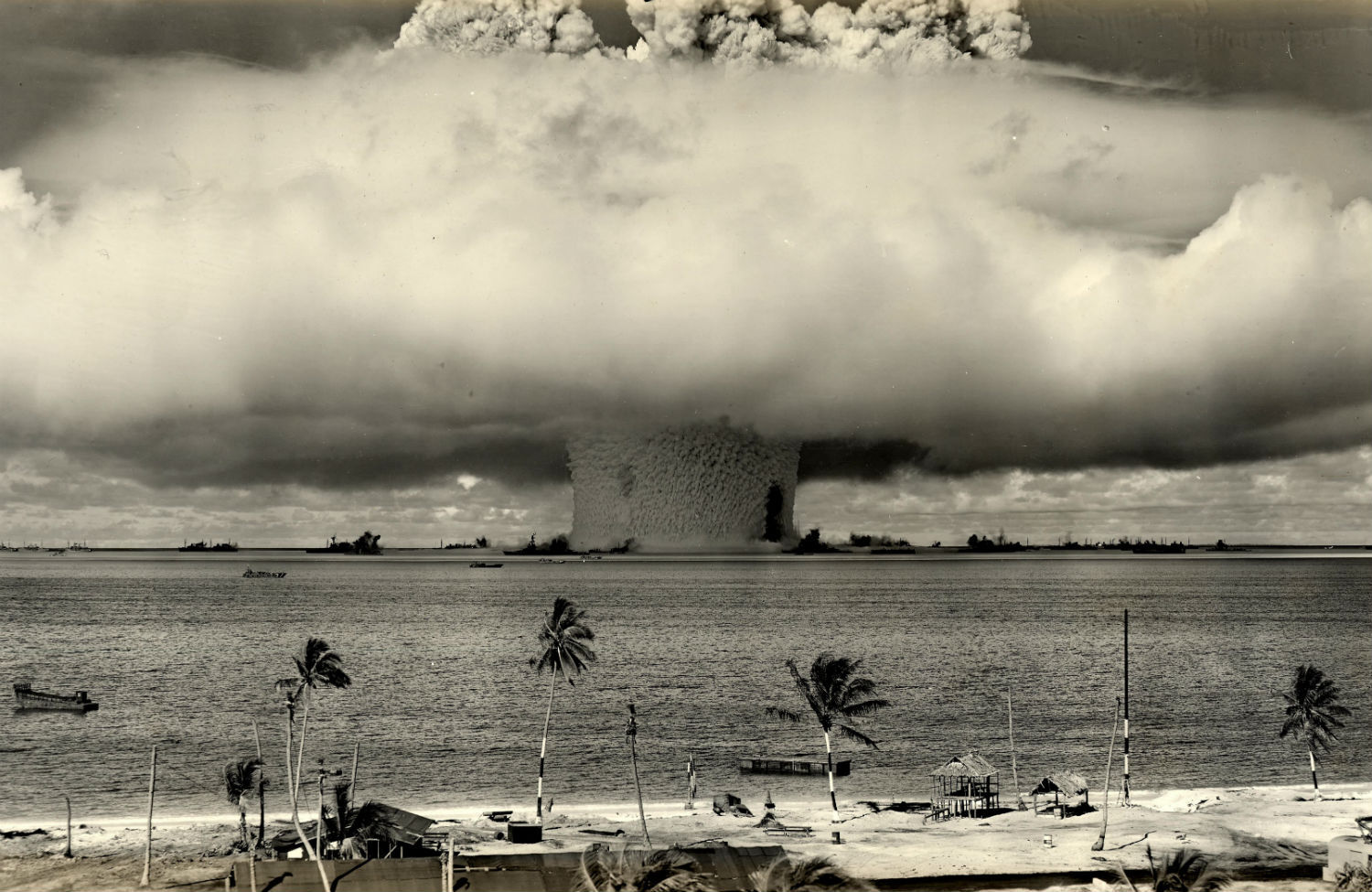 The Baker nuclear test, part of Operation Crossroads, on Bikini Atoll in the Marshalls Islands, July 25, 1946. (US Army)

Before “Bikini” became the name of a piece of female attire, it was the name of an atoll, part of the 1,156 islands and islets making up what is now the Republic of the Marshall Islands (RMI). In 2010, at RMI’s request, Bikini was added to UNESCO’s World Heritage List because of its historic importance as the site of twenty-three nuclear tests conducted by the United States between 1946 and 1958. There were sixty-seven US tests in the Marshall Islands altogether.

Now RMI has invoked the aid of another UN agency: the International Court of Justice in The Hague (not to be confused with the International Criminal Court). Last April, in an extraordinary and commendable act of chutzpah, RMI sued all nine states currently possessing nuclear weapons—the United States, the United Kingdom, Russia, China, France, India, Pakistan, Israel and North Korea—accusing them of violating their duty to negotiate in good faith for the elimination of those horrific weapons.

The theory of the case is based on three distinct but overlapping principles. Under the Nuclear Non-Proliferation Treaty (NPT) of 1968, each party “undertakes to pursue negotiations in good faith on effective measures relating to cessation of the nuclear arms race at an early date and to nuclear disarmament.” The 1996 advisory opinion of the ICJ in the nuclear weapons case asserted that “there exists an obligation to pursue in good faith and bring to a conclusion negotiations leading to nuclear disarmament.” The addition of the words “and bring to a conclusion” was important and made clear that just negotiating, without reaching a specific objective, was not enough. Customary international law also supports the legal obligation to eliminate nuclear weapons.

In some ways the NPT obligation, being treaty based, is the strongest arrow in RMI’s bow. But there is a small problem: four of the accused states (India, Israel, Pakistan and North Korea) are not members of the NPT. The obligation proclaimed by the ICJ and that flowing from customary international law are applicable to every country in the world. But there is another problem: of the nine accused states, only three—India, Pakistan and the UK—are subject to the compulsory jurisdiction of the ICJ. (The United States, which was a great promoter of the ICJ in its early years, renounced compulsory jurisdiction in 1985 while the case involving military and paramilitary operations against Nicaragua was pending).

RMI has asked the other six states to submit voluntarily to the court’s jurisdiction, but it remains to be seen whether any of them will do so. In the three cases actually pending, India and Pakistan have advised the court that they intend to file objections, and the UK is expected to follow suit. At this point it is not known exactly what the objections are or will be, but it stands to reason that the court will have to be satisfied that there is a genuine legal dispute between the plaintiff state and the defendants in order to proceed. In this respect RMI can argue that, as a member of the international community, it has the right and duty to enforce an obligation of fundamental and universal importance. It can also argue that, given the planetary consequences of a nuclear war, it can be adversely affected by such a war, no matter where it takes place.

The latter argument is not as farfetched as it may seem. Last December, the government of Austria sponsored the third of three conferences in two years on the humanitarian impact of nuclear weapons. Each was attended by about 125 to 150 governments and was largely ignored by the mainstream media. The Summary of Findings of the Vienna Conference included the following paragraph:

The impact of a nuclear weapon detonation, irrespective of the cause, would not be constrained by national borders and could have regional and even global consequences, causing destruction, death and displacement as well as profound and long-term damage to the environment, climate, human health and well-being, socioeconomic development, social order and could even threaten the survival of humankind.

RMI is represented at the ICJ by Tony deBrum, the country’s foreign minister, and Phon van den Biesen, a Dutch lawyer experienced in ICJ litigation. They are backed by a team of international law experts who are taking the cases very seriously. A substantial number of civil society organizations are supporting the cases, including the Lawyers Committee on Nuclear Policy in New York and the Nuclear Age Peace Foundation in Santa Barbara.

One effect of the RMI initiative is to throw a spotlight on the policies of the nuclear weapons states, which claim to be committed to a nuclear weapons–free world while showing not the slightest willingness to reach that goal. Reduction, which can go on forever, is fundamentally different from elimination, which reaches an end point. The legal obligation to conclude negotiations for complete nuclear disarmament is not met by shrinking a nation’s nuclear arsenal from 600 to 300 weapons, as France has done, nor by the agreement between the United States and Russia to reduce the stockpile of deployed long-range nuclear warheads each to 1,550 by 2018, as was done in the New START Treaty negotiated in 2010. One might add that the deterioration of relations between these two countries has made further reductions unlikely for the foreseeable future—not to mention the fact that, according to a projection by the Monterey Institute, the United States plans to spend about $1 trillion over the next three decades to modernize its nuclear weapons and their delivery vehicles.

The Marshall Islands initiative may be a long shot, but it is not a fool’s errand. It is a cri de coeur by a people who, like the hibakusha of Japan, have experienced the barbarism of nuclear weapons on their own bodies and their own lands. It comes at a time when the members of the NPT, at the upcoming quinquennial review conference, may at long last decide to take concrete measures toward nuclear disarmament, or face the possibility of seeing the treaty disintegrate. Many civil society organizations will do their utmost to bring about the former. It also comes at a time when too many policy-makers, having lived so long with nuclear weapons, are beginning to regard them as just another kind of weapon, instead of the uniquely atrocious one that it is. To them, the Marshall Islanders are saying what the nuclear scientist Joseph Rotblat said to whoever was willing to listen when he accepted the Nobel Peace Prize in 1995: “Remember your humanity.”

Information about civil society events before and during the NPT Review Conference in April and May is available at peaceandplanet.org.