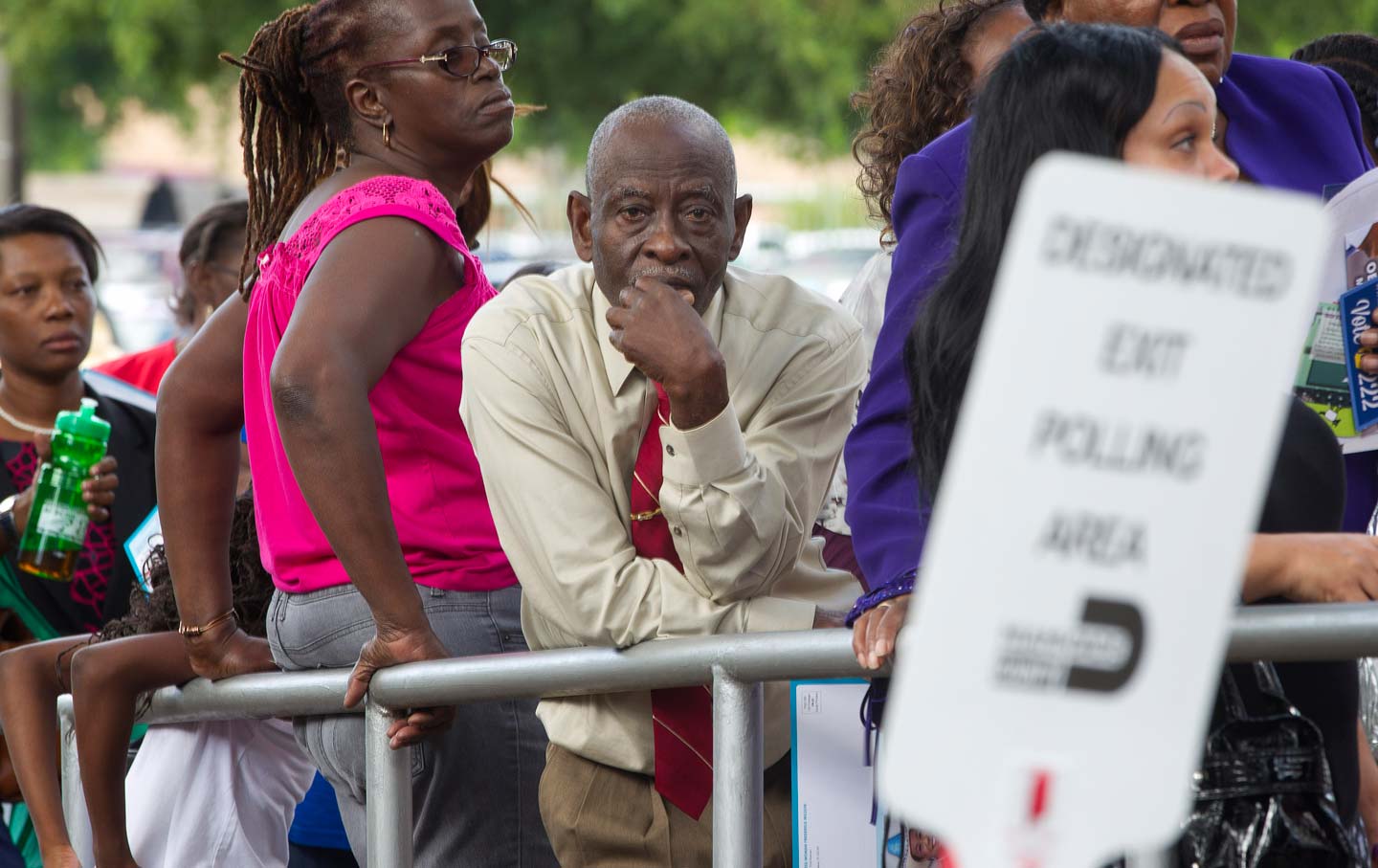 Ted Cruz’s campaign is in hot water for sending mailers to Iowans accusing them of a “voting violation” for not showing up to previous caucuses, a confrontational get-out-the-vote tactic that could backfire by seemingly criminalizing the act of allegedly not voting.

Cruz has led the charge among the GOP presidential candidates to make it harder to vote by championing strict voter ID laws, praising the gutting of the Voting Rights Act and introducing legislation to require proof of citizenship to register to vote in federal elections.

But his leading non-Trump rival for the GOP nomination, Marco Rubio, hasn’t been any better on the issue. As I reported for The Nation:

As a senator from Florida—a state with a well-documented history of voter suppression—Marco Rubio opposed the restoration of voting rights for nonviolent ex-felons and supported his state’s cutbacks in early voting, which contributed to seven-hour lines during the 2012 election. That same year, he supported a controversial purge of voter rolls by Governor Rick Scott that was stopped by a federal court. Along with Cruz, Rubio also backed a Senate amendment requiring a government-issued photo ID to vote in federal elections.

Voting rights hasn’t come up in any of the 11 presidential debates so far, even though the 2016 election is the first presidential race in 50 years without the full protections of the Voting Rights Act.

But individual voters have been asking the candidates where they stand on the issue. During a campaign stop in Des Moines on October 25, John Olsen, a 46-year-old substitute teacher from Ankeny, asked Rubio, “What about the six-hour long lines to vote in Miami?”

“That is only on Election Day,” Rubio responded.

It was a bizarre response from the Florida senator, seeming to suggest that long lines are okay if they occur on Election Day, when most people tend to cast a ballot. But it was also factually inaccurate. After Florida cut early voting from 14 days to eight days during the 2012 election, which Rubio supported, there were long lines throughout the early voting period.

Rubio should read about Desiline Victor, a 102-year-old Haitian immigrant who waited three hours to cast a ballot on October 28, 2012, in Miami, left without voting, and had to return later that evening to have her vote count. She was President Obama’s guest at the State of the Union in 2013. An estimated 200,000 Floridians did not vote in 2012 because of long lines at the polls.

Olsen pressed Rubio about other recent voting problems in the state, which he also dismissed.

“What is your opinion about the ex-felon voter purge that caused thousands of legitimate voters not to be able to vote?” Olsen asked.

“No one intentionally kept anyone from voting,” Rubio said. “It is unconstitutional and illegal to deliberately keep someone from voting.”

In fact, 12,000 registered voters were wrongly labeled as ex-felons during the 2000 election in Florida and erroneously purged from the voting rolls, which helped swing the election to George W. Bush.

“What about the restrictions on voting drives that kept the League of Women Voters from conducting their voter drives?” Olsen asked.

“No one intentionally kept anyone from voting,” Rubio responded again. (Florida’s sweeping restrictions on voter registration drives in 2012 were blocked by a federal judge, who called them “harsh and impractical” and “burdensome.”)

In addition, Olsen asked Rubio whether he supported restoring the Voting Rights Act.

“I am not familiar with that bill,” Rubio said. “If you get me a copy of that bill, I can take a look at it.”

“Well, Senator Rubio, it has been out for many months,” Olsen responded. “I am surprised you are not familiar with it.”

Rubio should study it closely. The latest version of the bill would require states with 25-year history of repeated voting violations to approve their voting changes with the federal government. Florida, not surprisingly, is one of them.