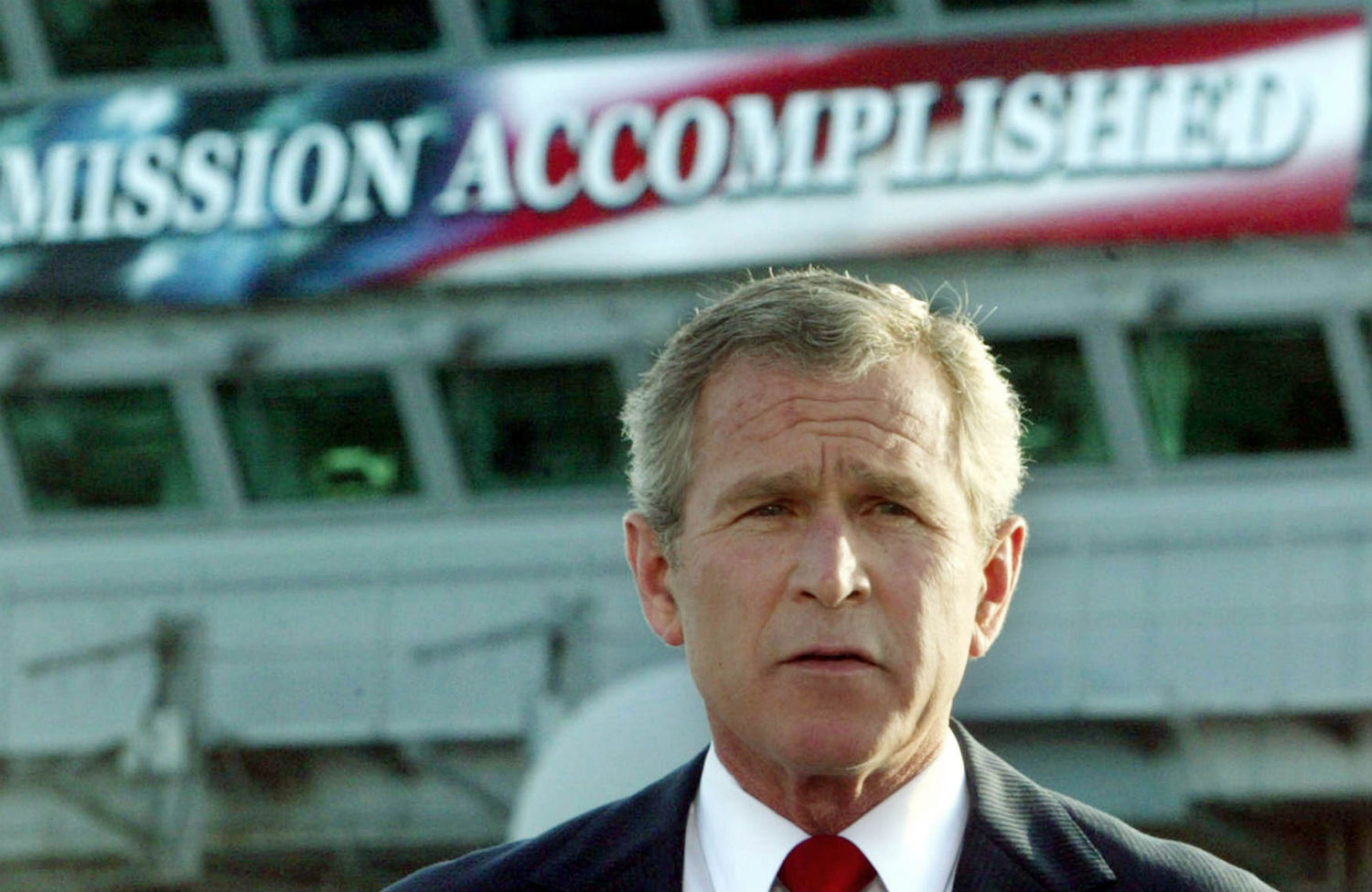 President Bush declares the end of major combat in Iraq as he speaks aboard the aircraft carrier USS Abraham Lincoln in May 2003. (AP Photo/J. Scott Applewhite)

The belated effort by retired officers to oust Donald Rumsfeld is worse than “too little, too late.” It may lead to bypassing the most important target.

While Rumsfeld has consistently failed in his duty to uphold the law, defend the Constitution, advance national security and respect human rights (including the torture ban), his greatest offenses have never involved “mismanaging” policy. The problem is the policy itself–an immoral foreign policy pursued through fraudulent and unconstitutional tactics–created by President George W. Bush. Bush ordered it through the chain of command of the US government, a fact that his military critics surely understand.

When asked about the challenge to Rumsfeld, the President recently declared, “I’m the decider, and I decide what’s best.” This is one time we can take him at his word. From building a fraudulent case for the Iraq War to overseeing torture and indefinite detainment to authorizing illegal domestic spying, Bush makes the decisions and others suffer the consequences. Firing Rumsfeld now is like benching a quarterback for running plays ordered by the coach. It is a start, and Rumsfeld should definitely go, but it is only the beginning.

Bush has committed high crimes and misdemeanors by fraudulently taking us to war with Iraq, authorizing domestic spying, condoning torture and undermining the constitutional principle of separation of powers by repeatedly defying Congress and the courts. Even when his illegal domestic spying program was exposed, he brazenly declared he would continue to break the law, betraying his oath to “preserve, protect and defend the Constitution of the United States.” That is why it is time for Americans to consider the grave action of removing the President from office. It is a radical remedy for a radical reality, but the long-term health of our democracy depends on turning the national conversation from Rumsfeld and midterm politics to Bush and impeachment.

When I began outlining the case for impeachment, at civic forums and in a new book with my colleagues at the Center for Constitutional Rights (CCR), even sympathetic audiences responded with cynicism or discouraging forecasts. It was “That’s not going to happen” or “Isn’t that unlikely given today’s climate?” But one of the most common tactics to stifle a movement–especially for a progressive idea–is to convince people that the problem cannot be fixed. So it is with impeachment.

Before I can even mention the four articles of impeachment in our book, critics usually pile on with predictions about political odds. This happens on the rare occasions when the “I-word” is mentioned on television, and in many conversations I’ve had about our book. (Data is rarely cited, yet polls show 51 percent of likely voters support Congress considering impeachment if Bush “didn’t tell the truth about the reasons for the Iraq war,” while only 27 percent supported Clinton’s impeachment in August 1998.)

Some argue an impeachment inquiry will go nowhere in today’s Republican Congress, but the same applies to global warming and many other ideas in the national debate. Yet as the number of impeachment supporters has grown–including thirty-four members of the House of Representatives (roughly one of every six House Democrats), fourteen Democratic candidates for Congress, dozens of local officials across the country and now even pop icons like Neil Young and Carl Bernstein–the idea is gaining traction.

All this is happening as the President faces more damning disclosures about his conduct. Former officials are speaking out about the misuses of WMD intelligence, the clumsy attempt to hide Bush’s authorization to selectively leak classified information and several shocking revelations about the domestic spy program. Despite prior claims to the contrary, the NSA program includes widespread surveillance of American citizens, including domestic calls and privileged conversations from doctors and attorneys.

Some of the newest impeachment supporters say the domestic spying program was the last straw. At CCR, we filed a lawsuit in January against the President and the heads of intelligence agencies for spying on Americans without judicial approval or statutory authorization. The suit seeks an injunction that would prohibit the government from conducting warrantless surveillance of communications in the United States.

The NSA program violates the Foreign Intelligence Surveillance Act (FISA), which was established in 1978 as the “exclusive means by which electronic surveillance” could be conducted (emphasis added). This act specified procedure and practice for governmental surveillance, and established a secret court to authorize phone taps, e-mail and physical searches. FISA was established in response to years of unregulated governmental domestic spying, including efforts to intimidate and silence political leaders like Dr. Martin Luther King Jr. That is one reason organizations that have been targeted by such illegal surveillance in the past, including the NAACP, filed court papers in support of our lawsuit last week.

This kind of surveillance has brought down a President before. In his recent impeachment essay in Vanity Fair, Carl Bernstein noted, “Illegal wiretapping—among other related crimes—was the basis of one of the articles of impeachment against Nixon passed by the House Judiciary Committee.” Americans should remember that President Nixon also invoked “national security” for his illegal surveillance. Investigations proved his abuse of power had nothing to do with security.

This leads to one of the most disturbing questions about President Bush’s spying program. The entire FISA court was designed to defer to presidential authority in emergencies and most areas of national security. Warrants are provided retroactively up to three days after a wiretap is employed. The secret FISA court is leak-proof–far more than the Bush Administration, it turns out–and virtually always grants requests from every Administration. (The court approved every wiretap request in its first twenty-three years of existence; then from 1995 to 2004, it approved 99.9 percent of wiretap requests–allowing 10,613 out of 10,617, it turned down four.)

So why did the Bush Administration circumvent such a friendly, secret venue?

A plausible explanation has never been provided. Of course, it is illegal no matter what. Yet when an Administration with a track record of lies, torture and abuses of power cannot even float a palatable rationale for expanding unsupervised spying on American citizens, it feeds speculation that part of the program’s purpose is sinister.

Just last month, government documents disclosed through the Freedom of Information Act revealed that the Administration has misused the FBI to infiltrate peaceful American groups, such as the pacifist Thomas Merton Center. We need an impeachment inquiry with subpoena power to find out if the NSA had similar goals, and to get the bottom of the other crimes and scandals of the Bush presidency.

Are there people in Congress who could lead such an inquiry? The resolution to initiate an impeachment investigation is sponsored by Michigan Representative John Conyers. He is next in line to chair the House Judiciary Committee, if the Democrats win in November. As Presidents Johnson, Nixon and Clinton know, the road to impeachment begins in that committee. Where it ends depends on the American people.