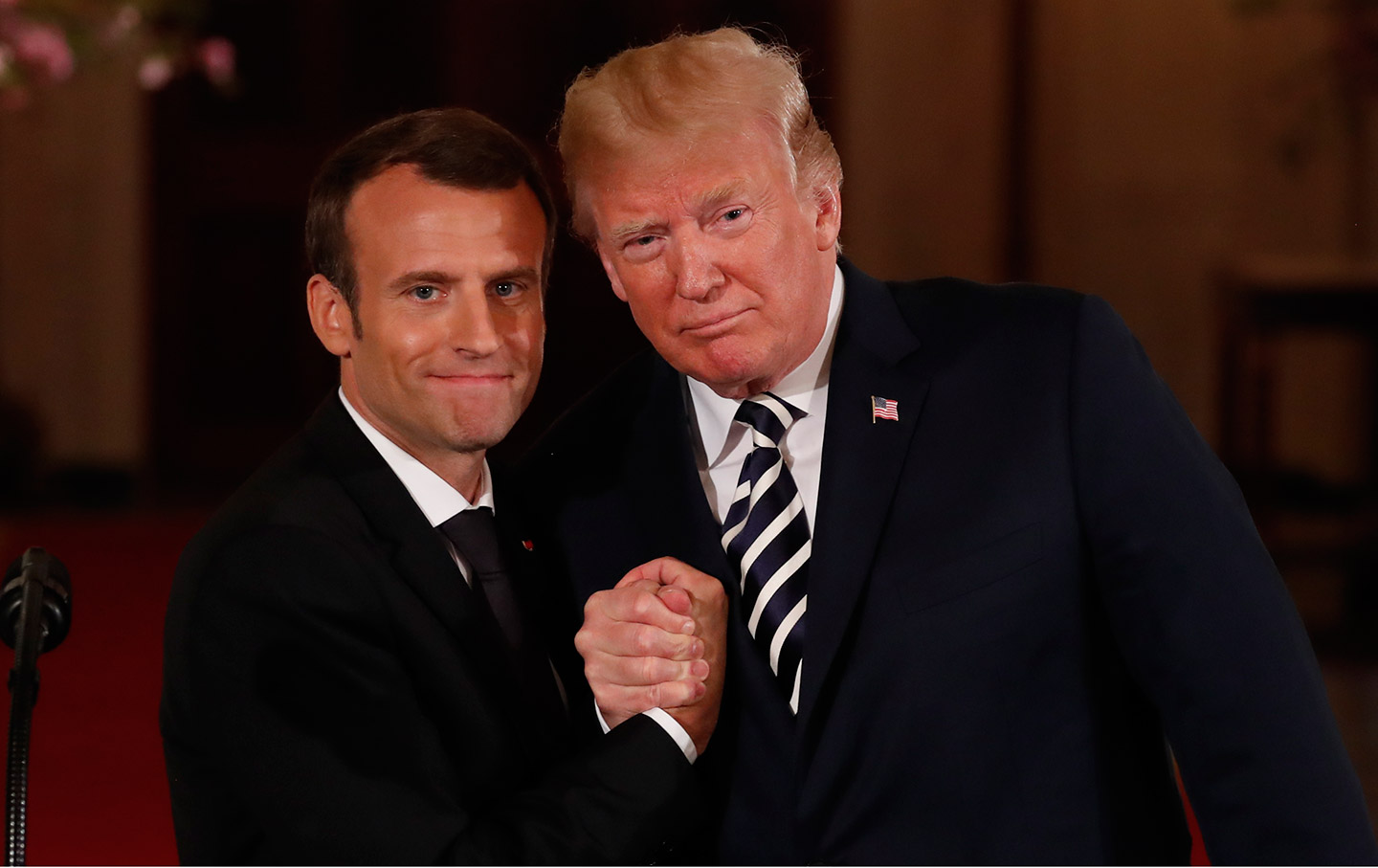 On the third and final day of his state visit, French President Emmanuel Macron spoke before a joint meeting of Congress and made eminently sensible cases for the United States to take climate science seriously, rejoin the Paris climate accord and not precipitously pull out of the Joint Comprehensive Plan of Action, otherwise known as the Iranian nuclear accord. Whether or not he will ultimately succeed on these issues is still very much in question.

Yet one area where Macron can claim a victory of sorts is on Syria, where he evidently has persuaded President Trump to keep troops on the ground there for the indefinite future.

At a joint press conference on Tuesday, Mr. Trump explained, in a manner recalling George W. Bush at his least eloquent, his Macron-influenced Syria policy:

As far as Syria is concerned, I would love to get out. I would love to bring our incredible warriors back home…. We’ve done a big favor to neighboring countries, frankly, but we’ve also done a favor for our country.

With that being said, Emmanuel and myself have discussed the fact that we don’t want to give Iran open season to the Mediterranean, especially since we really control it to a large extent. We really have controlled it, and we’ve set control on it.

So we’ll see what happens. But we’re going to be coming home relatively soon. We finished, at least almost, our work with respect to ISIS in Syria, ISIS in Iraq. And we have done a job that nobody has been able to do. With that being said, I do want to come home, but I want to come home also with having accomplished what we have to accomplish.

Put more succinctly: We’re there for the duration, folks.

With regard to Syria, Macron is playing the same role that his predecessor Nicolas Sarkozy and French foreign minister Bernard Kouchner (along with French philosopher Bernard Henri-Levy) played in 2011 when they—working with then-Secretary of State Hillary Clinton—were able to overcome President Obama’s reticence, and successfully lobby for the disastrous NATO intervention in Libya—a move that not only threw that country into full fledged civil war, but also gave a foothold to ISIS, and exacerbated the migrant crisis. Obama later properly acknowledged the entire episode, from which that country has yet to recover, as “a shit show.”

Macron’s call for what amounts to a permanent US presence in Syria will likely be welcomed by those who have decided to abandon the lessons of Iraq and Libya.

Yet the Macron-Trump policy of endless intervention raises the question as to why it is the West’s business, and not Syria’s, to shape its own destiny now that the brutal and costly 7-year civil war is, at long last, winding up.

In his speech before Congress, Macron invoked the words of his most distinguished predecessor, General Charles de Gaulle. But unlike de Gaulle, Macron evinced no concern over American military overreach and unlike de Gaulle he seemed to embrace a kind of NATO-Atlanticism as an elite substitute for old-fashioned patriotism. Macron betrayed the best traditions of French foreign policy by calling for an American-led “multilateralism” which in reality amounts to little more than an ersatz-militarism which will—if carried out—only manage to inflict more damage on Syria and embroil the US and France in another Middle East forever war.

History shows that in the months leading up to the 2003 Iraq war, the French, Germans, and, yes, the Russians acted as America’s true friends in warning the Bush administration against embarking on what has proved to be the biggest US foreign-policy debacle since Vietnam. It was the British and our numerous Eastern European “allies” who went along with it, loudly proclaiming their undying friendship along the way.

If Macron was as good a friend to Trump as he so often claims, his message would have been, with regard to Syria: Mr. President, get out.