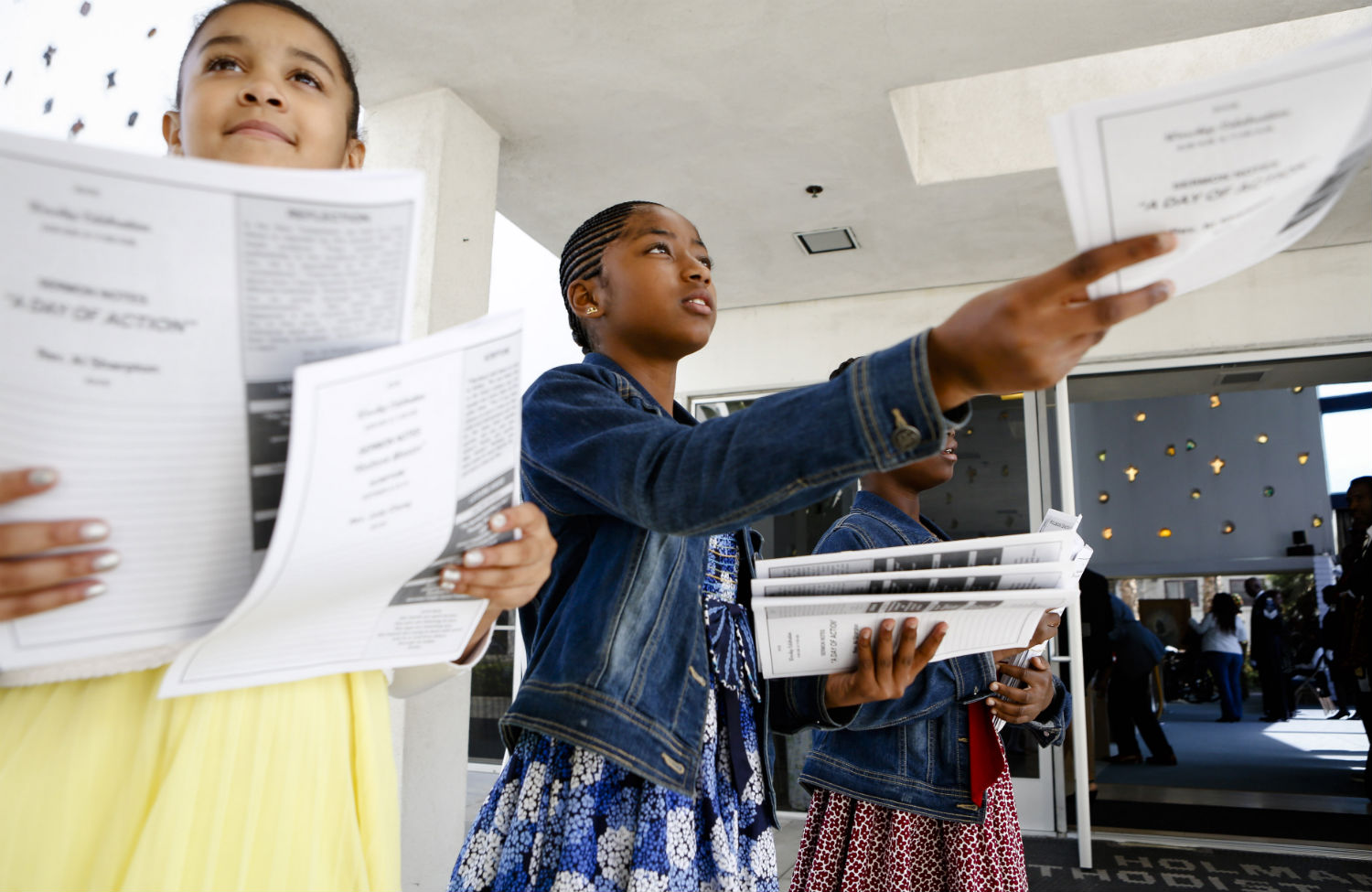 Girls hand out programs during a forum on black and Latino communities in the United States.  (Bret Hartman / AP Images for AIDS Healthcare Foundation)

Black girls in Mississippi know that the world too often sees them as angry, man-hungry, uneducated baby mamas. Their perceived value can depend on how light their skin is, how thin their bodies are, and how loosely their hair curls. They sometimes withstand sexual assault and depression, and a culture of secrecy makes it difficult to talk about trauma.

Young women of color in New Mexico are often so busy taking care of family members in the context of intergenerational addiction that they lack the time or support to make their own plans or pursue their own dreams. They live in the shadow of a potential border wall and long for “a world where there is healthy masculinity.”

These are some findings from a year-long, nationwide listening tour undertaken by the New York–based NoVo Foundation, which this month announced it will invest $90 million in efforts to serve girls of color over the next seven years—the largest commitment to that demographic by a private foundation to date. Hosting listening sessions, which were attended and summarized by cultural anthropologist Aimee Cox, was a critical step in the foundation’s process of determining how and where to distribute its funds.

For Autumn Billie, a 23-year-old indigenous feminist and activist who talked with the foundation last year about her sex-education work with Native American students in rural northern New Mexico, the experience was unique. “Wow, someone is coming in and actually valuing the authentic mission and the authentic programming and organizing that we actually want to do, instead of [asking us to] fit in a kind of cookie cutter,” she said, reflecting on the conversation.

Giving girls of color and their advocates this sense of being in the driver’s seat was precisely what NoVo intended with its approach to developing its grant-making strategy. “We listen deeply because we know foundations are not the experts,” Jody Myrum, who directs the foundation’s Initiative to Advance Adolescent Girls’ Rights, told me. “Really, girls and movement leaders are the experts.” Based on feedback from those experts, NoVo is taking a three-pronged approach:

In recent years, organizers and scholars have pushed to make sure that the needs of girls and women of color—and the clear ways these needs are distinct from boys and men of color as well as from white girls and women—receive appropriate attention and resources. Their efforts have gained newfound support and recognition, including from officials during the Obama administration. The statistics that drive the focus on this demographic are stark: According to federal data, black female students are suspended at higher rates than girls of any other race or ethnicity and at higher rates than white boys. Black girls represent nearly a third of the girls who are detained in and committed to juvenile justice facilities. Native American girls are only 1 percent of the population, but 3.5 percent of the girls in those facilities. A 2015 report titled “The Sexual Abuse to Prison Pipeline” found that girls in the juvenile justice system are disproportionately victims of sexual violence, and end up criminalized because their trauma isn’t often identified or treated.

The organizing, consciousness raising, and healing work that NoVo wants to fund already exists, though it may not currently have the benefit of big-foundation money. Tynesha McHarris, a fellow with the NoVo initiative, said the past year’s listening tour allowed her to hear from girls of color and the women who are their allies. She said they’re hard at work helping each other stay safe and combat violence at school, in their homes, and in their wider communities, but “they are doing things oftentimes on their own time and their own dime. The movement is vibrant but incredibly under-resourced.”

It’s not just that women of color don’t apply for funding to keep their work afloat. It’s that their work is seen as a risky investment, which creates a vicious cycle, Myrum explained. “You’re not funded, so then you’re not fundable. People don’t want to take risks on women of color often.” NoVo’s strategy seeks to disrupt that cycle and partner with efforts that have been starved of philanthropic dollars in the past.