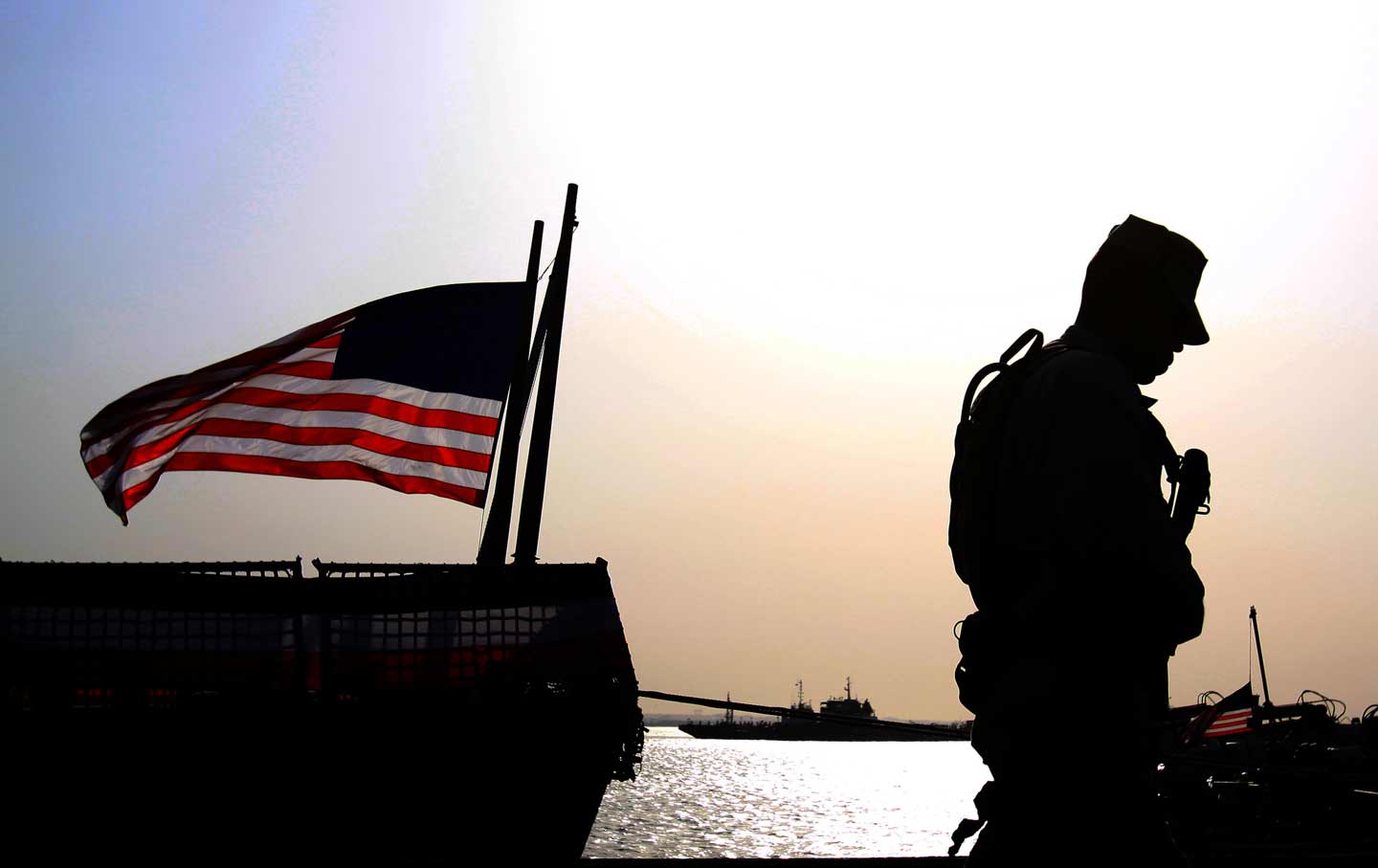 An unidentified US soldier patrols next to the American flag on a military ship docked in Manama, Bahrain. (AP Photo / Hasan Jamali)

EDITOR’S NOTE: This article originally appeared at TomDispatch.com. To stay on top of important articles like these, sign up to receive the latest updates from TomDispatch.com.

Understand this: I’m an American veteran. I’m also a Muslim-American in a country in which, in these years, that hasn’t exactly been the happiest category to fall into. Now, let me tell you a little story.

Recently, I had an ominous dream. It was noon on a grey, cold January 20, 2020, and Donald Trump was being sworn in for his second term as president. Massive inaugural crowds cheered him exuberantly as a gentle snow fell upon a sea of MAGA red-hats and TRUMP banners waving in front of the Capitol.

In my dream, however, the Capitol wasn’t quite the same as I remembered it from my days stationed there as a young Navy sailor. It seemed almost war-torn as clouds of dark smoke billowed up on the horizon and the sound of gunfire could be heard somewhere in the distance. In my dream—don’t ask me how—I could also hear the terror-filled voices of people screaming or crying out for help as Immigration and Customs Enforcement (ICE) agents, clad in black uniforms, stormed local Washington homes and businesses, arresting people and loading them onto large unmarked cargo trucks.Meanwhile, those inaugural crowds—I have no idea if they were the largest in the history of dreams—were flanked by military Humvees as heavily armed soldiers in unfamiliar camouflage uniforms stood behind the president while he delivered his second inaugural address. I could even hear his words eerily reverberating through the Capitol. “The enemy,” he exclaimed, “has infiltrated our great nation because of weak immigration laws allowed by treasonous politicians!”

At that very moment, he told the exuberant crowd, he was already single-handedly purging “those terrorists and their enablers from our ranks.” The MAGA banners waved ever more frantically and the crowd roared as he declared, “Law and order are now being restored to our great nation once again!”

I awoke in a cold sweat. Unlike the sort of nightmare I’d normally shake off as a fantasy of slumber, the result perhaps of that late-night dose of Ben and Jerry’s I had meant to resist, this one stuck with me and, I’m sorry to say, recurred.

Worse yet, these days I no longer have to drop into some deep, unnerving dream state to experience it. Though few of us are likely to admit it, some version of that dream of mine is, in fact, the secret daily nightmare of millions of my fellow Muslim-Americans. In a moment, when immigrants in this country live in a fear-scape all their own, believe me, so do we. In our living nightmare, an administration that can seem not just ineffective but hapless beyond imagining, plagued by scandal, and stocked with staff members heading for the exits (or being escorted off White House grounds) might nonetheless transform itself into something even more deeply threatening to Americans like us. It might sooner or later consolidate power and, eager to distract the public from its actual plutocratic and other grim policies, turn on us “bigly.” Without dropping into another dream state, I can easily enough imagine how, with the tacit endorsement of Trump’s base, that administration might prepare itself to use a future devastating terror attack, the next Orlando or San Bernardino, to skewer American Muslims or the immigrant community and so pave the way for a true living nightmare.

Such a crisis could take many forms, but imagine, for instance, a “dirty bomb” attack (the use of conventional explosives to spread radioactive nuclear waste materials across a wide area of some urban neighborhood). Just such an attack has certainly been a focus of concern in the US intelligence community for years now. In fact, in 1999, while on active duty as a new member of the Defense Intelligence Agency, the first interagency briefing I attended at CIA Headquarters in Langley, Virginia, focused on that very issue.

Should that happen or anything like it, it’s easy enough to imagine how the Trump administration might use it to enhance its own power at our expense. With the public cowering in fear, martial law might be declared. Meanwhile, a Congress that, in the face of the imperial presidency, has already abdicated its constitutional duty to declare war, might grant Donald Trump far greater authority than he already possesses, thanks to the unprecedented post-9/11 powers any president now wields—and the American people (or enough of them, at least) would “rally ‘round the chief.”

And then, or so I imagine (and, at least among American Muslims I know, I’m not alone in this), so much worse would begin to unfold and my recurring nightmare would become a nightmarish reality. In the aftermath of such an attack, so much in our world, from the Women’s March to Robert Mueller’s Russia investigation, would become distant and forgotten memories. Dissent would be denounced as unpatriotic, perhaps ultimately illegal, and basic human rights might be suspended.

By now, I’m sure you see where I’m going. In my nightmare at least—and I’m talking about the waking one now, the one I live with every day—countless immigrants and American Muslims are in camps awaiting who knows what. It’s not as if there is no precedent for anything like that in America, given the experience of Japanese-Americans rounded up and kept in just such camps during World War II.

In this moment of growing Islamophobia, at a time when a president has a desire to simply ban foreign Muslims and cast American ones as the worst of the worst, it’s just one more step into my fears of the future for me to imagine myself, an American veteran, as well as my family and other members of the Muslim community, sitting inside darkened train cars on our way to internment camps, while we desperately try to convince ourselves that surelythe Supreme Court will overturn such an injustice.

And given our world, given the history of racism in this country, it’s not that hard to imagine scores of broken men, women, and children already at our destination as we hurtle down the tracks to join them. Nor is it that hard to imagine the Trump administration dismissing those who protest such treatment as disloyal co-conspirators, and then using militarized police raiders to hunt some of them down, too. I can even imagine mosques being set ablaze and synagogues and churches that attempted to protect citizens fleeing all of this being raided at the government’s orders.

Heading for a Dark Destination

In some dark corner of my mind, given what we know about what we human beings are capable of, I can almost imagine some kind of Muslim-American version of the Holocaust, the ultimate nightmare that immigrants and Muslim-Americans have dreaded since Donald Trump’s election victory in November 2016, but dare not whisper. There’s nothing sadder to say than that such fears do not completely lack historical precedent: The world has, of course, been here before.

If the fate of the millions who perished during World War II, thanks to Adolf Hitler and his minions, doesn’t seem real enough to you, just pay a visit to the Holocaust Memorial Museum in Washington, DC. There, you can witness the haunting images of our human brethren who, by virtue of their faith or background, were destroyed, some by their own countrymen.

Now, I know perfectly well that those of you who aren’t Muslim-Americans are likely to find such fantasies at best extreme; at worst, beyond conception. The reason isn’t hard to imagine, because of course Donald Trump isn’t Adolf Hitler; White House adviser Stephen Miller isn’t Joseph Goebbels; White House Chief of Staff John Kelly isn’t Hermann Göring; and former CIA Director and next Secretary of State Mike Pompeo isn’t Heinrich Himmler. Yes—but Pompeo, a major Islamophobe in an administration filled with them, has insisted that all Muslims are potentially complicit in terrorism and that “people who deeply believe that Islam is the way” are a “threat to America.” He has also received the “National Security Eagle Award” from a noted anti-Muslim hate group, ACT for America, and has been interviewed more than 20 times by Frank Gaffney, “the country’s most influential Islamophobe,” on his radio show. And when it comes to Islamophobia (and Iranophobia as well), in this administration Pompeo is hardly alone.

Still, not even bans, insults, and a visible loathing for those of us who don’t look like and pray like the president and his men, not even torchlight parades by Trump-supporting American neo-Nazis, get you easily to anything like an American Holocaust. But know, when you read this, that there are those of us out here who, in the dark of night, are indeed haunted by such thoughts anyway and by thoughts as well of those in the 1930s who dismissed the fears of the worst to come as so much hyperbole.

Speaking just for myself, I can’t help but believe that, in our 241-year history that includes a bitter civil war, two world wars, and the Great Depression, this could turn out to be the most crucial moment of all. I can’t help but wonder, at least in my bleaker moments, whether there will be any coming back from the dark destination, whatever it turns out to be, that we, as a nation, now seem headed for. And if not, just remember that no one will be able to say that we didn’t know what we were doing, that there were no warnings as people like me were demonized in our own country.

Whatever hell might still come, for this veteran at least, Donald Trump’s America is already hell enough.