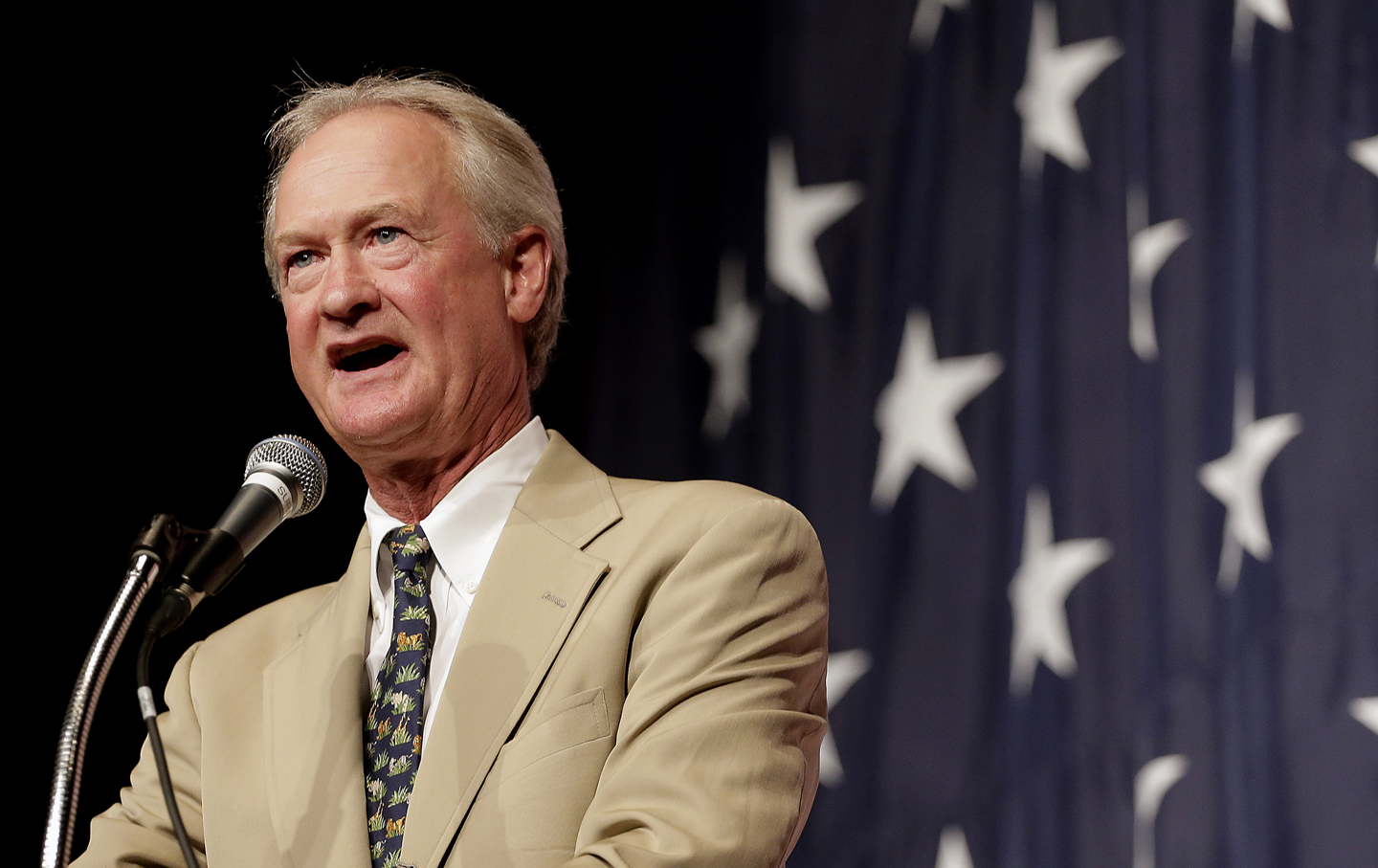 Lincoln Chafee has no taste for neoconservative fantasies, or for the politicians of both major parties who entertain them.

That may not make him the winner of the Democratic presidential contest that the former Rhode Island senator and governor has entered—Chafee’s poll numbers are low, and his campaign has a quirky, do-it-yourself feel that tends to earn him marginal media coverage at best. But it could make him a duly disruptive voice in the Democratic debates that are scheduled to begin in October.

Chafee runs his presidential race with a distinctive personal history, as a former Republican senator and independent governor who only joined the ranks of the Democratic Party in 2013. But he also runs with a unique sense of history, forged by his experience as one of the small circle of current and former senators who the late Robert Byrd referred to as “the immortal 23 Members of this Chamber who stood against popular opinion, stood up to the President of the United States, and threw himself against the forces of war in voting against the resolution to launch an unprecedented military assault on Iraq.”

Chafee is skeptical about militarism and enthusiastic about diplomacy. He argues that issues of war and peace must be considered with a long view, that the challenges of the moment have roots that cannot be neglected, and that Americans must understand the damage done by past errors of judgment in order to avoid new errors of judgment. To that end, Chafee refuses to let other candidates—Republicans or Democrats—play the margins with regard to the Iraq war or its aftermath.

As a former chair of the Senate Foreign Relations Committee’s Middle East subcommittee who has kept up with the issues, Chafee is ready to explain exactly how today’s messes in the region developed—and exactly which American politicians misread realities on the ground and misdirected US policy

“I’m glad I wasn’t one that drank the Kool-Aid.” — Lincoln Chafee on his rejection of neocon arguments

At the Iowa State Fair last week, Chafee ripped Republican Jeb Bush for suggesting that President Obama screwed things up in Iraq. No, said Chafee, the mess was made by Bush’s brother, George W., and by his prince regent, Dick Cheney. If Jeb Bush thinks differently, announced Chafee, “he’s just drinking some kind of neocon Kool-Aid…”

But Chafee can also be blunt about Democrats who voted to authorize Bush to order the 2003 invasion and occupation. “Considering the premise for invading Iraq was based on falsehoods and considering the ramifications we live with now from that mistake, I would argue that anybody who voted for the Iraq War should not be president and certainly should not be leading the Democratic Party,” he said in April.

Two of the other Democratic contenders were in Congress when the 2002 authorization of the use of force vote was held. Vermont Senator Bernie Sanders, then a member of the House, voted “no,” vigorously arguing against the rush to war. Democratic front-runner Hillary Clinton, who served with Chafee in the Senate, voted to authorize Bush and Cheney to make their move. She has since said that she regretted the vote, telling reporters she “made a mistake, plain and simple.”

Sanders generally avoids criticizing other candidates for the Democratic nod. But Chafee argues that Democrats should be cautious about nominating someone who backed the war he opposed. “Just politically speaking,” he explains, “it’s important for the Democrat Party to say that’s a Republican mistake that we now have to fix.”

That perspective puts pressure on Clinton, who lost ground in her 2008 Democratic race with Barack Obama because of lingering discomfort with her vote on the 2002 use-of-force resolution.

When the issue of Iraq arises, Chafee cuts no one slack, as was obvious in Iowa last week.

After a member of the audience at the State Fair referenced supposed “evidence” of a WMD threat that was peddled before the war, Chafee gave no quarter.

“It never materialized,” said the Democratic contender. “That was proven not to be accurate.”

The audience member kept pushing the neocon line. And Chafee pushed right back.

“No, no,” the former senator replied. “I went to the CIA, sir, before I took my vote on the Iraq War. Listen to this: I asked them to show me all the evidence you have—‘I have to vote on this in three weeks.’ And all the analysts laid out what they had for evidence and it wasn’t anything. I was there for more than an hour. There just was no evidence of weapons of mass destruction. It was all a hoax. That’s the facts. That’s the truth.”

Chafee is an internationalist. He’s not advocating for an isolationist approach. An outspoken backer of the Iran nuclear agreement and a supporter of broader diplomatic initiatives, Chafee argues that the United States has a responsibility to work with international organizations to promote peace and justice in the Middle East and globally.

To do this, he says, there has to be a focus not just on the global challenges of the moment but of how those challenges developed.

“There’s something called the Downing Street Memo that came back and said the Brits were saying (before the war) there is no evidence of weapons of mass destruction,” the former senator reminded Iowans last week—foreshadowing a message that he is likely to bring to the debates.

“What a tragedy! We made a huge mistake. Now we have to fix it,” declared Chafee, as he returned to his frequent theme. “I’m glad I wasn’t one that drank the Kool-Aid.”