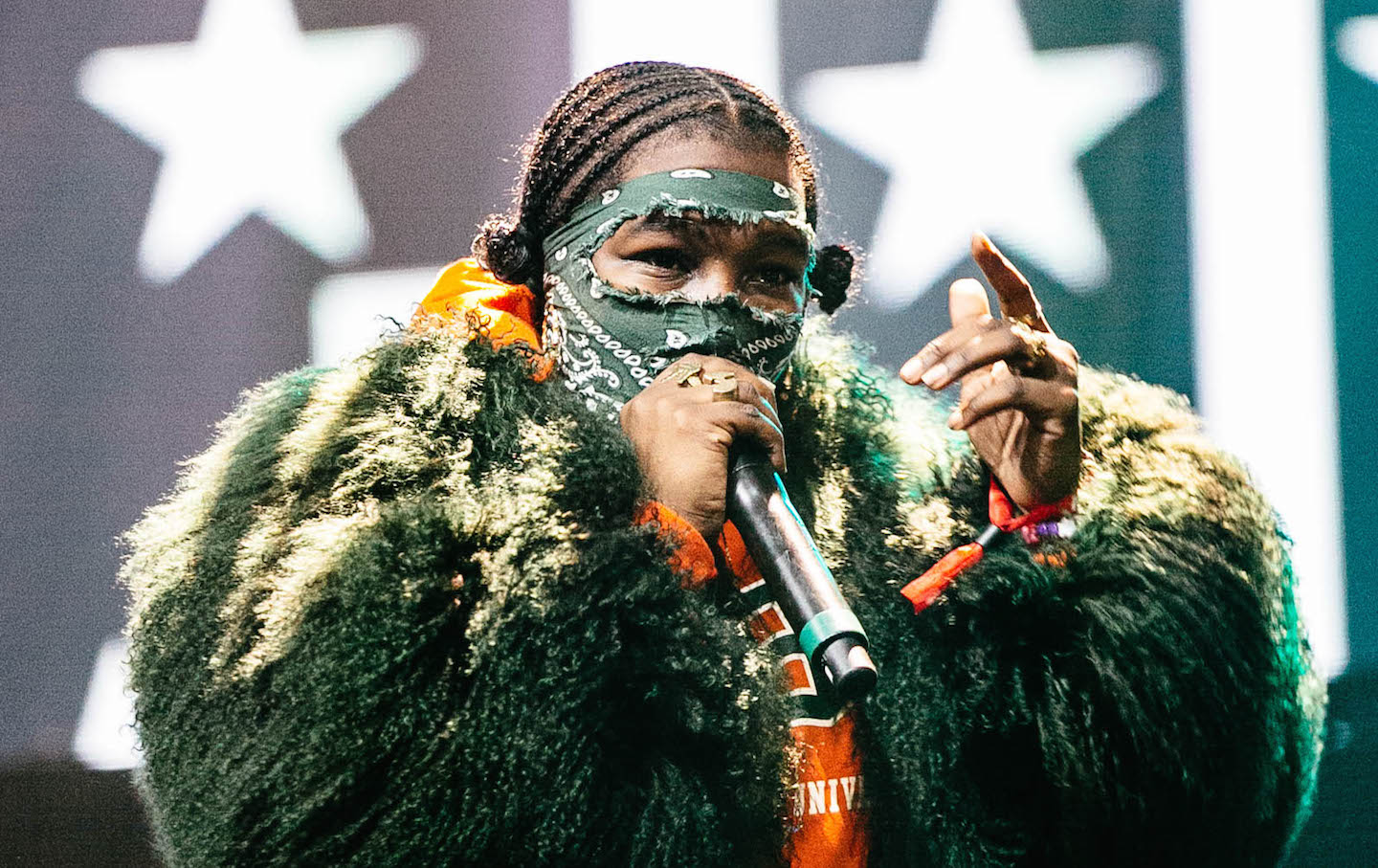 If you go by the mask alone, you’d think the New York rapper Leikeli47 keeps her guard up. But that’s not really true. Unlike MF Doom, whose supervillain mask denotes a new identity altogether, Leikeli47 isn’t hiding behind an alter ego. Her mask, as she’s pointed out in interviews, allows her identity to better shine through. “I made sure I was clear in the music,” she said in an interview with radio host Justin Credible on Power 106 in Los Angeles. Donning a mask, for Leikeli47, is an act of transparency—one performed on her own terms.

In Acrylic, her sophomore studio album, she’s franker than ever about who she is. Animated with a superfan’s blazing zeal for her cherished musical forebears, Acrylic finds Leikeli47 expressing her wit, inspiration, and gratitude with unflinching sincerity—a solid way of making an album with so many wild, genre-hopping curveballs work. She recalls Cardi B in the slow-rolling “No Reload,” then switches registers to fuse sickly-sweet piano crescendos with the sun-drenched mellow bass lines of Corrinne Bailey Rae on “Hoyt and Schermerhorn.” The latter track is a sentimental high-wire act that miraculously turns into something springy and hopeful instead of schmaltzy. That this sweet, made-for-radio love song can fit comfortably between a neo-soul ballad (“Top Down”) and a blast of adrenaline-spiked braggadocio (“Iron Mike”) is a testament to Leikeli47’s voice, which doesn’t just morph to suit her needs; it seizes and savors each new sound. Propelled by her restless energy and her cultural omnivore’s mental Rolodex, Acrylic evokes the jubilance of a musical whiz kid effortlessly going through her paces.

But Leikeli47 doesn’t just have an ear for mimicry; her musical instincts are stronger than that. She works in dancehall, gospel, radio-friendly pop, and gangsta rap with such a clear love for each genre that it winds up being less an exercise in flashing her skills and more an act of paying homage—and that Leikeli47 stans with such style is part of what makes Acrylic so much fun to listen to. That sense of joy is clearest in her devotion to ballroom culture—a nearly century-old queer- and black-led underground social network, competitive dance scene, and musical vernacular. On the album highlight, “Post That,” Leikeli47 captures the spirit and energy of a ball—a pageant where participants are judged as much by the athleticism of their movement as they are by the more ambient (and elusive) sense of style and drama. Channeling a current of ballroom’s electronic grace, her staccato commands—“Check your angles / Post that shit”—crack like a whip alongside the lush, metronomic kick drums layered over a beat made for voguing. Later, she’ll hand off the mic to her predecessors on “Full Set,” chopping up a sample of the sizzling diss that ballroom icon MC Debra lobbed at fellow star Kelly Mizrahi’s weave, all over a pulsing snare. Ceding most of the song’s space to Debra, the grand dame’s words become an anthem of renewal and defiant self-love.

Tying all this together is what Leikeli47 has described as her purpose: introducing listeners to the community she has an immense love for—Brooklyn nail salons, New York’s balls, even the particular intimacy of a subway-car romance. But this hometown love expands past the city limits and reaches into the South: Richmond, Virginia, is the unnamed location of the radio station in the skit “Kid Chocolate Radio,” and historically black colleges like Florida’s Bethune Cookman and Louisiana’s Southern University are laid out like jewels. Leikeli47 talks about running a cord across the hall for electricity when she was growing up, and about the single-parent homes on her Brooklyn block; but she also rejoices in stomp dances and drum lines, imagining young black kids at the HBCUs wearing their Greek colors and raising middle fingers to the police. This isn’t any one particular place or time; it’s blackness in all its richness. “For me, Acrylic is another creative invitation into my world,” Leikeli47 told The Fader. “It’s about walking our campuses and down our streets, coming into our neighborhoods and really understanding…why we move the way we move, why we tick the way we tick, why we party the way we party, why we love the way we love, why we’re resilient…. Of course, you got to be invited by us.”

What comes through most in Leikeli47’s work is that she’s ready, gleeful even, to subvert power. Focusing on black spaces as centers of joy that you can only wish you were invited into is just one way; the mask she wears when she performs is another. Sometimes a knit balaclava, sometimes a custom design, more frequently a bandanna with torn eye holes, the mask actively snubs the convention that a woman’s value extends outward from her face. Leikeli47 uses men as a springboard—she told an interviewer that she only really felt launched after Jay-Z selected her 2015 hit “F**k the Summer Up” as his Tidal playlist’s title track—then rejects their gaze altogether. It’s also intriguing: How can a mask not inveigle?

In this way, Leikeli47 has experienced firsthand how an invitation belies power, and how bestowing one is an art all its own. In Acrylic, the hand that she extends to you is shellacked and bejeweled, patterned and airbrushed with microscopic precision; you, however, are here only to humbly admire.