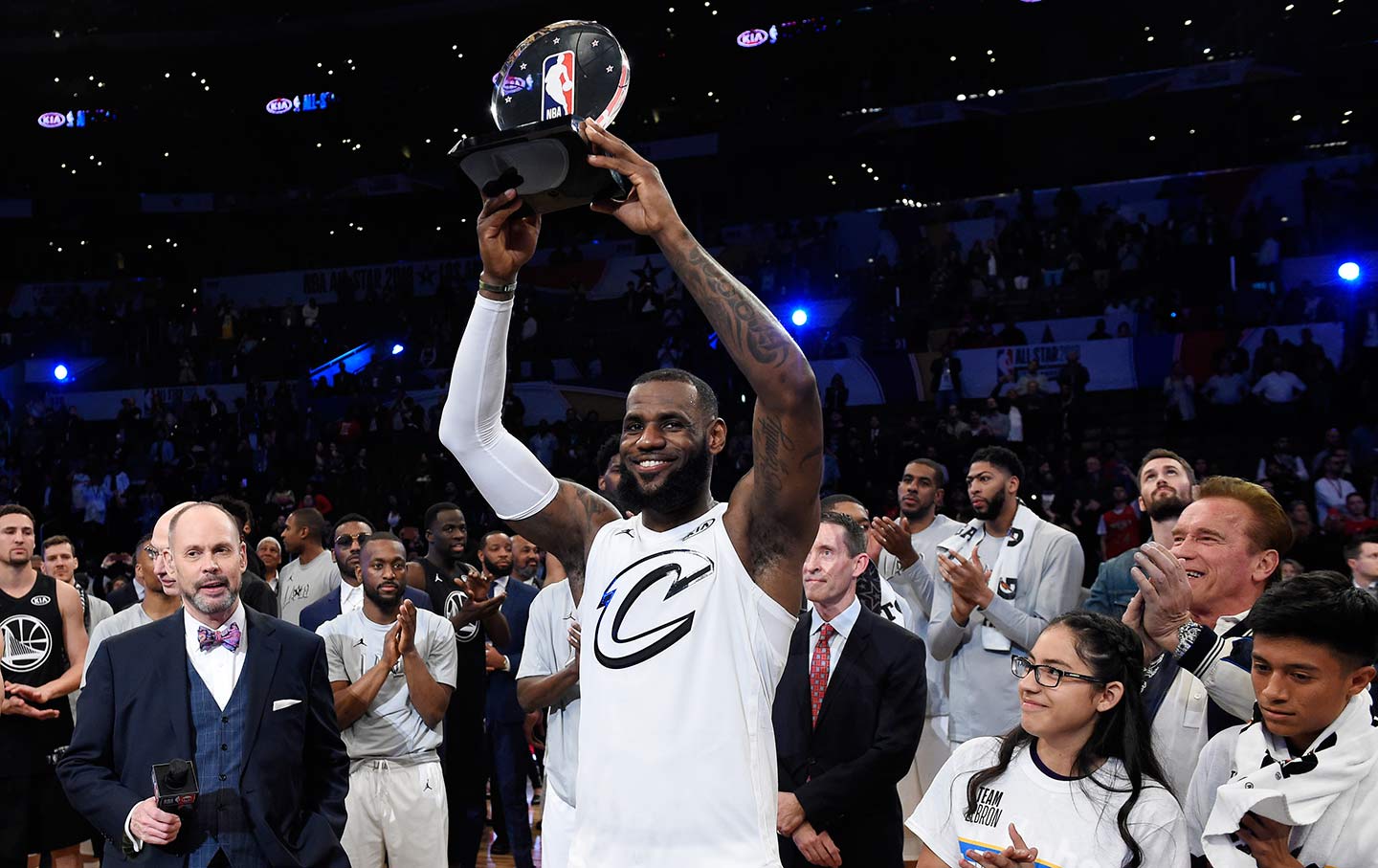 “Whatever her name is.” This is how LeBron James referred to Fox News host and professional bigot Laura Ingraham. The Ann Coulter mimeograph devoted an entire segment to disparaging LeBron James’s intelligence and telling him to “shut up and dribble.” It is a tired routine that has been used to shut down outspoken black athletes for as long as there have been outspoken black athletes.

Ingraham was melting down on air like a certain particle of snow because James and fellow all-star Kevin Durant had criticized Donald Trump… for being Donald Trump. James in particular earned her ire for saying, “[Trump] really don’t give a (expletive) about the people…. While we cannot change what comes out of that man’s mouth, we can continue to alert the people that watch us, that listen to us, as this is not the way.”

Ingraham’s goal was to provoke a response and create the kind of buzz that would provide more content for Fox News, content she could then feed into a racist inception loop of coverage about herself. It’s a troll move, played out on a major cable-news network. My own theory has long been that the best possible response to these people is to starve them. For their species, the opposite of love is not hate but indifference. Yet, in this case, I was very wrong. LeBron James did more than just respond. He provoked a tidal wave of support from his own personal Justice League in the world of sports.

It started when he said, “We will definitely not shut up and dribble. I will definitely not do that…. She did the best thing to help me create more awareness…. I get to sit up here and talk about social injustice, equality [because] a woman on a certain network decided to tell me to shut up and dribble. So, thank you, whatever her name is. I don’t even know her name.”

We quickly saw that LeBron would not be the lone voice to stand against Ingraham, not by a long shot. Durant called her “racist” and “ignorant”. Dwyane Wade tweeted, “They [used] to try and hide it.. now the president has given everyone the courage to live their truths.”

Fellow all-star Paul George said, “People just view us as athletes and basketball players. We’re just a part of what’s going on in this world and what’s going on in this society just as much as anybody else. We’re fathers, we’re sons, we’re brothers, we’ve got family to look after. We’re just connected as deeply in this as anybody else is, so for someone to go out and say, ‘Stick to dribbling the basketball,’ that’s pretty ignorant. That just goes to show you where we are as a country right now.”

Players union Executive Director Michele Roberts said, “Between LeBron’s 40 million followers and Kevin Durant’s 17 million followers on Twitter, Laura Ingraham has now introduced herself as intolerant and narrow-minded to 57 million people around the world. We stand with our players,”

Even Commissioner Adam Silver, unprovoked, started his “state of the NBA” press conference by speaking in support of politically vocal players against these kinds of attacks. And this is just the tip of the iceberg.

Faster than you can say, “Roger Ailes was a serial sexual predator who built Fox News on a foundation of lies,” #wewillnotshutupanddribble was trending worldwide.

What seems to have upset Ingraham the most is not the uniform charges of racism but the sentiment expressed by Charles Barkley, “LeBron James is LeBron James. Who’s Laura Ingraham?”

The avalanche of response actually put Ingraham on the defensive, compelling her to both invite James onto her show and make the following back-pedaling statement: “There was no racial intent in my remarks—false, defamatory charges of racism are a transparent attempt to immunize entertainment and sports elites from scrutiny and criticism.”

So now we have Laura Ingraham having to defend herself from charges of racism and her own obsolescence, and once again LeBron has proven many of our conventional assumptions to be simply wrong. When LeBron started, his goal of embodying a new template, “the socially conscious mogul,” was something I didn’t think was possible, simply because it had never been done. You either had to be a Muhammad Ali or a Michael Jordan: a man or a brand. LeBron has crushed that binary. Similarly, I never thought there was any advantage to feeding a troll, especially one as insipid as Laura Ingraham. But LeBron has created a different normal, where you can give other people confidence by stepping out, and marshaling a collective response in the face of an unrepentantly racist, demonstrably violent right-wing echo chamber. Laura Ingraham chose to read from a very old, very tired script in telling a black athlete to shut his mouth. She didn’t expect LeBron James to adopt a new script in response, and we are all, in these tragic times, better for it.