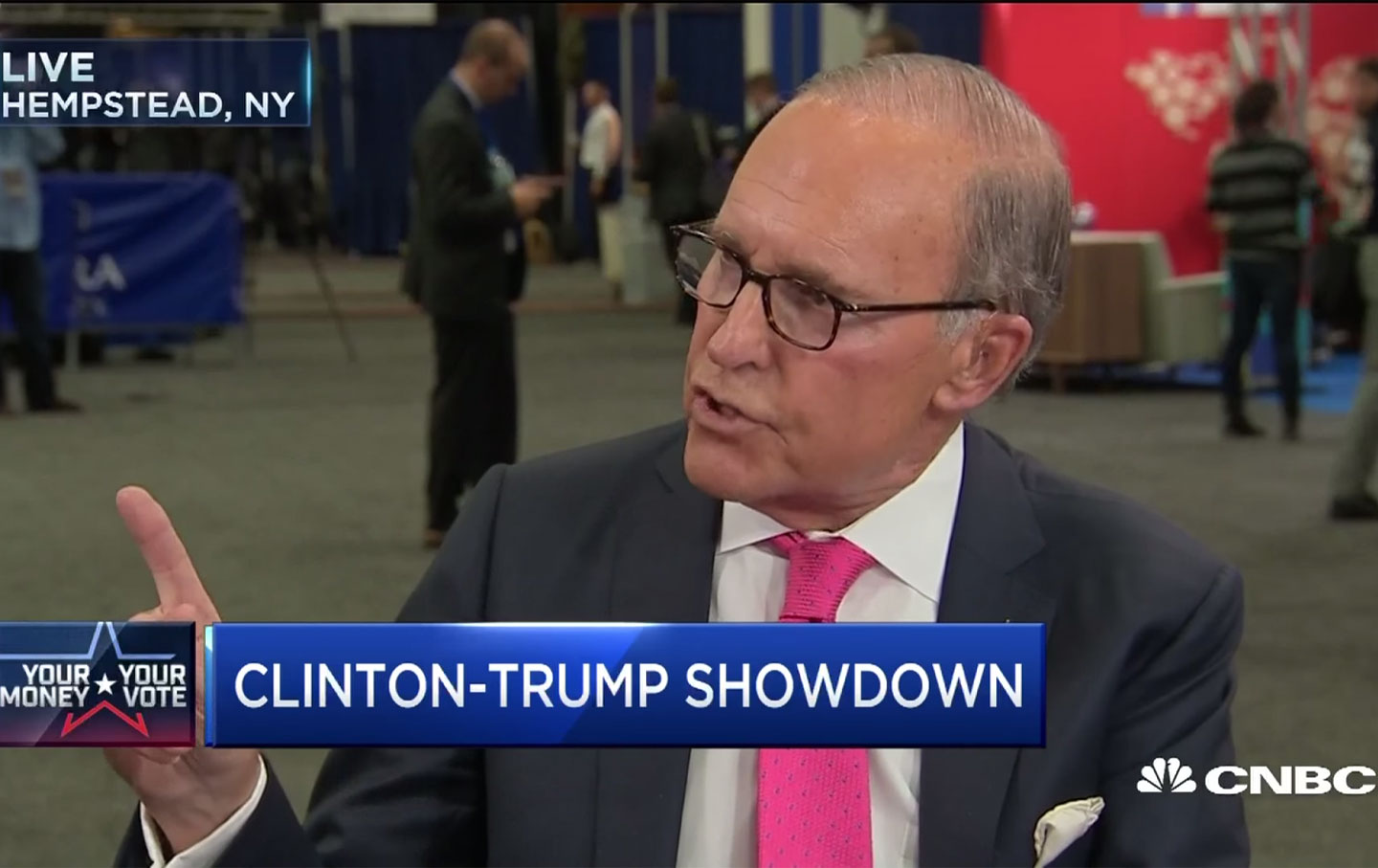 The overriding quality necessary for landing a position in Donald Trump’s administration is that Trump has to know you from TV. Most of his cabinet selections have logged plenty of time in cable-news green rooms. Monica Crowley and K.T. MacFarland, two named advisers, were paid contributors to Fox News. Secretary-of-state nominee Rex Tillerson is perhaps an exception, but he came highly recommended from TV faves Condi Rice and Dick Cheney.

So in that context, floating Larry Kudlow to run the Council of Economic Advisers is perfectly apt. Kudlow isn’t an economist, but he plays one on TV. And more important, he confidently (and usually wrongly) favors what has to be seen as the dominant economic gospel of the Trump administration: tax cuts.

Before we get into that, let’s just note how consistently wrong Kudlow has been over the years. He denied the existence of a housing bubble, even after it collapsed. He touted the “Bush boom” and boasted that there wouldn’t be any recession in December 2007—the month the recession began. Once the downturn was undeniable, Kudlow dismissed it, said it would be mild, predicted the bottom over and over as the economy continued to sink. He recommended buying stocks in September 2008, the month the market lost a substantial amount of its value. Baghdad Bob looks at this guy and thinks he might need to get his facts straight.

More than wrong, Kudlow can be absolutely psychopathic in his veneration of the market. He argued that banks that manipulated benchmark interest rates were actually the victims, rather than criminals. He commented on the Fukushima disaster in 2011: “The human toll here looks to be much worse than the economic toll, and we can be grateful for that.”

But while some see unadulterated crazy, Trump probably sees the loyalty that he wants out of an adviser. And even if Kudlow doesn’t get the job, the mutual admiration shows that supply-side economics will be back with a vengeance in 2017.

Joining an uncomfortably large portion of Trump’s cabinet, Kudlow doesn’t agree with Trump on trade. He has called the president-elect’s flirtation with tariffs akin to Herbert Hoover’s. He doesn’t really agree with Trump on immigration, though he’s been gradually altering his views there. He’s criticized Trump for his comments on barring Muslims from the country.

But Kudlow and Trump line up bigly on taxes: “I have, for many months, endorsed Trump’s tax-cutting plan,” he said back in March.

Kudlow is like the human version of that napkin on which Arthur Laffer sketched his signature policy idea, that raising taxes reduces government revenue. Kudlow believes cutting taxes boosts the supply of goods and services, necessarily super-charging investment and job creation. Set aside the fact that this hasn’t really worked whenever it’s been tried, and Kudlow has a long, loooong track record of being wrong about these matters. The point is that Kudlow’s supply-side tendencies, despite seeming variances with Trump, matches very well with the president-elect’s apparent economic priorities.

We’ve seen this play out for a while: Trump blows a lot of smoke about subjects that are heretical to mainstream conservatives, but the heart of the agenda is tax cuts and deregulation. That was again confirmed this week.

Soon-to-be White House chief of staff Reince Priebus laid it out in a candid conversation with Hugh Hewitt this week. Hewitt led by asking when the economic-stimulus package would be coming, and Priebus breezed right past it. “I think we’re probably going to lead with Obamacare repeal and then replace, then we will have tax, you know, we’ll have a small tax-reform package, and then a bigger tax-reform package at the end of April.”

Incidentally, Obamacare repeal is really a stealth tax-cut package as well. The actual insurance reforms and changes won’t be triggered for up to four years. But the tax increases that help fund the ACA—a 0.9 tax for Medicare and a 3.8 percent tax on “net investment,” both only on the wealthy—will get rolled back immediately. As Families USA reveals in a new study, this equals a $346 billion tax cut over 10 years, entirely for families making over $200,000 a year. Health-care companies would get back an additional $247 billion. It translates to an average tax cut of $33,000 for the top 1 percent, according to the Tax Policy Center.

Kudlow will also likely welcome the plan to prioritize tax cuts over practically any other change in the budget, devised by Tom Price, the nominee for Health and Human Services secretary. As House Budget Committee chair, Price proposed a system to restructure the so-called “paygo” rule, which mandated that all new spending had to be offset with revenues or cuts elsewhere in the budget. This was counterproductive enough—especially during downturns when stimulus is needed. But as the Center on Budget and Policy Priorities explains, Price would make it so that entitlement programs could only be paid for by cuts in other entitlement programs rather than higher revenues. In addition, expansions of existing entitlement programs through increased utilization—like if unemployment spikes and more people apply for unemployment insurance—would also have to be offset by entitlement cuts somewhere. And deficit-increasing tax cuts would not have to be offset at all: Congress would be able to cut any tax it wants without a corresponding change to revenue or the budget.

There are multiple other changes in the Price budget process that would hinder new spending but not tax cuts. It’s not totally clear whether Congress will adopt the Price plan, but it certainly falls in line with the prevailing economic priorities of the right. You might as well call it the Kudlow plan—a race to the bottom to eliminate taxes throughout the budget. The only reason Kudlow wouldn’t get the Council of Economic Advisers job is that he wouldn’t have anything to advise—team Trump’s going to do what he wants anyway.