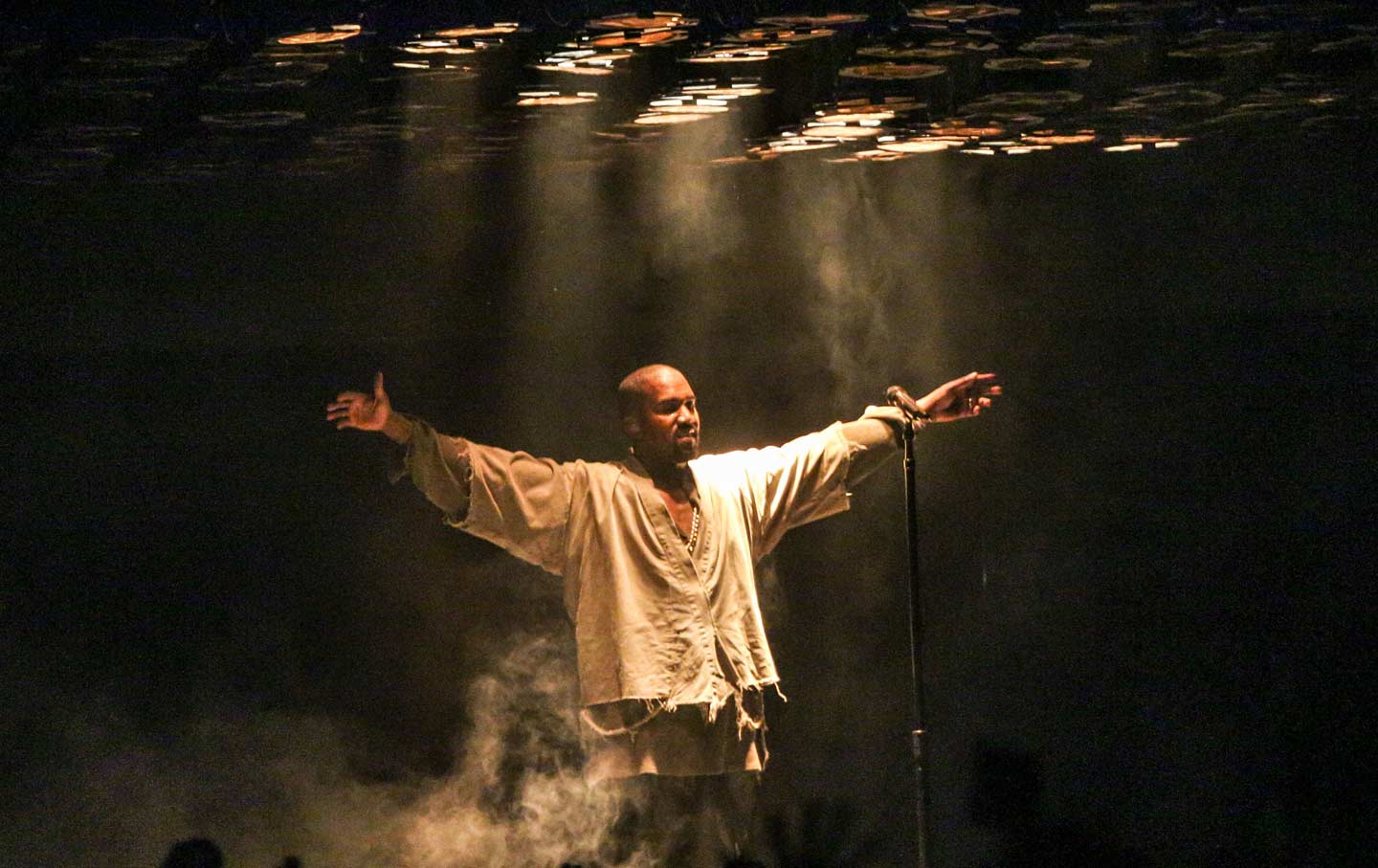 When the Chicago native Kanye West debuted in the music industry in the early 2000s, he did so not primarily as a performer, but as a revisionist. Like most hip-hop producers of the period, West relied on samples of older music, but his signature technique involved accelerating samples of soul-music vocals and instrumentation so as to distend and elevate their pitch. It wasn’t enough to look back to the music of the past and duplicate it: The past had to be reframed, rushed to make up for lost time. West’s curious approach to production, at once retrospective and progressive, would carry over into his aesthetic as a rapper: to name just one example, most of “Last Call,” the prolonged coda to his 2004 debut, the masterpiece The College Dropout, consists of West reviewing, in plain speech instead of verse, the improbable history that led to the creation and release of the album itself.

Several critically acclaimed, widely influential, and commercially successful collections later, West’s art of memory and possibility has become a towering fact of American culture, and West himself has soared to heights of wealth and celebrity that have, by his own account, the potential to alienate himself from his audience. “I miss the old Kanye, / straight from the go Kanye, / chop up the soul Kanye, / set on his goals Kanye. / I hate the new Kanye, / the bad mood Kanye, / the always rude Kanye, / spaz in the news Kanye,” West raps on “I Love Kanye,” a spoken-word interlude at the center of his most recent album, The Life of Pablo. (The album was made available on Tidal in February, and is still being refined; Kanye has said it will not be for sale anywhere else.) Yet the ultimate effect of the interlude is not to distance the artist from his former self but to reinforce the sense of continuity in his work, which, as the interlude itself amply proves, has always evinced the same peculiar combination of excess, self-awareness, necessity, and responsibility, the same artist reviewing himself fondly but wistfully over the passage of time. “First class with the seat back, I still see you / In my past, you on the other side of the glass / In my memory’s museum.” West is addressing an old girlfriend on those lines from his 2007 album Graduation’s “Flashing Lights,” but he may as well be addressing his former self at any given moment in the present.

One of the pleasures of “The Life of Pablo” is the search for elements of the prior albums to experience them anew.

And there is much to address: The Life of Pablo has a fair claim to be considered the most retrospective album in a body of work where reminiscence is the norm. As West indicates in his brief autobiography in “I Love Kanye,” he has reached a point, on album seven, where the classic music of the past he samples is, in fact or in essence, his own, whether it’s “the old Kanye” of albums one through three or “the new Kanye” of albums four through six. One of the primary pleasures of The Life of Pablo is secondary—the search for correspondences with the prior albums opens the opportunity to experience them anew. The album’s aesthetic is less uniform and novel and more a splicing together of already existing ambiances: the sunlit, gospel-inflected cheer of The College Dropout; the chilly, auto-tuned desolation prevalent on 808s & Heartbreak; the electrified abrasions of melody typical of Yeezus; the war-wounded exuberance of My Beautiful Dark Twisted Fantasy; the refrain “Wake up, Mr. West!” from Late Registration; and the pop-tinged, eclectic spaciousness of Graduation.

This isn’t to say that The Life of Pablo lacks a strong narrative around which to organize itself, but it does means that that narrative is splintered, and in some ways depressed, by the variety of sounds through which it is expressed. Indeed, most of West’s late additions to the track list—the dissonant, fizzling “Freestyle 4,” an interlude consisting of a phone conversation with imprisoned rap impresario Max B; “Facts,” an extended rant against West’s former shoe sponsor Nike; “I Love Kanye”—actively impede the narrative thrust of the album. This is especially unfortunate because the album’s narrative, such as it is, is its most original and daring aspect. During a series of perorations delivered over Twitter prior to the album’s release, West declared The Life of Pablo to be a gospel album and revealed that the Pablo of the title referred not to Pablo Picasso or to Pablo Escobar, but to the Apostle Paul. West has, effectively, staged in his album a drama centered on the possibility of keeping faith with God and man: “I’m trying to keep my faith / But I’m looking for more / Somewhere I can feel safe / And end my holy war,” runs the refrain on Pablo opener “Ultralight Beam.”

Affirmations of faith, from many sources and in many registers, pervade the first half of the album: a sample of a 4-year-old girl recorded on Instagram, gleefully exhorting God to drive out devils; a man, backed by a gospel choir, singing to God that “You’re the only power”; and an entire two-minute track, “Low Lights,” that consists of a woman speaking spontaneously, calmly, and fervently (and frequently in perfect iambs or anapests) about the fulfillment born from her faith in a loving God. Yet even early in the album, doubtful interjections are already present: God is asked why he sends depressions, not blessings; the figure of the heavenly Father is overlaid with the figure of West’s own father, who went bankrupt. The shadow of death intrudes. “Hands up, hands up, then the cops shot us”; “Hard to believe in God, your nigga got killed.”

Therefore, the ground has already been prepared for the shift in tone and theme that takes place halfway through where the lushness, light, and warmth of earlier tracks gradually gives way to a set of desperate and despondent lyrics recited over sparse, dark, cold productions. Already the gorgeously stuttering synthesizers of “Waves” connote sorrow and shivering as much as they do buoyancy and radiance; “FML” is chilled and stripped down to a lethal, dissonant three-note motif; the fluent “Real Friends” is charged with nocturnal cool; the assemblage of voices on “Wolves” sounds positively frozen. In these songs, the concept of human fidelity is ruthlessly questioned: between the artist straining to keep himself from cheating on his wife, the manipulations of his relatives and friends, and the dangers facing his young children. The hope of keeping faith with humans, let alone divinity, seems a hopeless proposition.

The album then tapers off with three tracks (“30 Hours,” “No More Parties in LA,” “Fade”) reminiscent, in pace, theme, and placement, of “Last Call.” Regarding faith, these tracks are more ambiguous than they are triumphant or despairing. Looking back, a faithless girlfriend and a thieving cousin are forgiven; the artist resumes his many-sided life (“a thirty-eight-year-old eight-year-old with rich nigga problems”); all the while, he’s still internally riven by dialectics of solitude and fame (“When no one ain’t around / I think I think too much”). The album begins in sunlight and then falls into night before proceeding to a crepuscular end: Only time will tell whether the twilight is that of dawn or dusk.

Misfires and confusions aside, West has crafted an album animated by those uncertainties of life and faith that can only be resolved in the future: For now, though, it seems as if the only things with which to keep faith are the unpredictability of time and the inevitability of memory. With its paradoxical logic of sin and forgiveness (the greater the sin, the greater the redemption), the religion of the cross, as its most intelligent adherents, from Saint Paul on, have recognized, is extraordinary, and extraordinarily dubious. Kanye West has revealed his confidence, defeats, and flaws on prior albums, but it is on The Life of Pablo, where he most fully shares his doubts, that he is most convincing as a Christian.