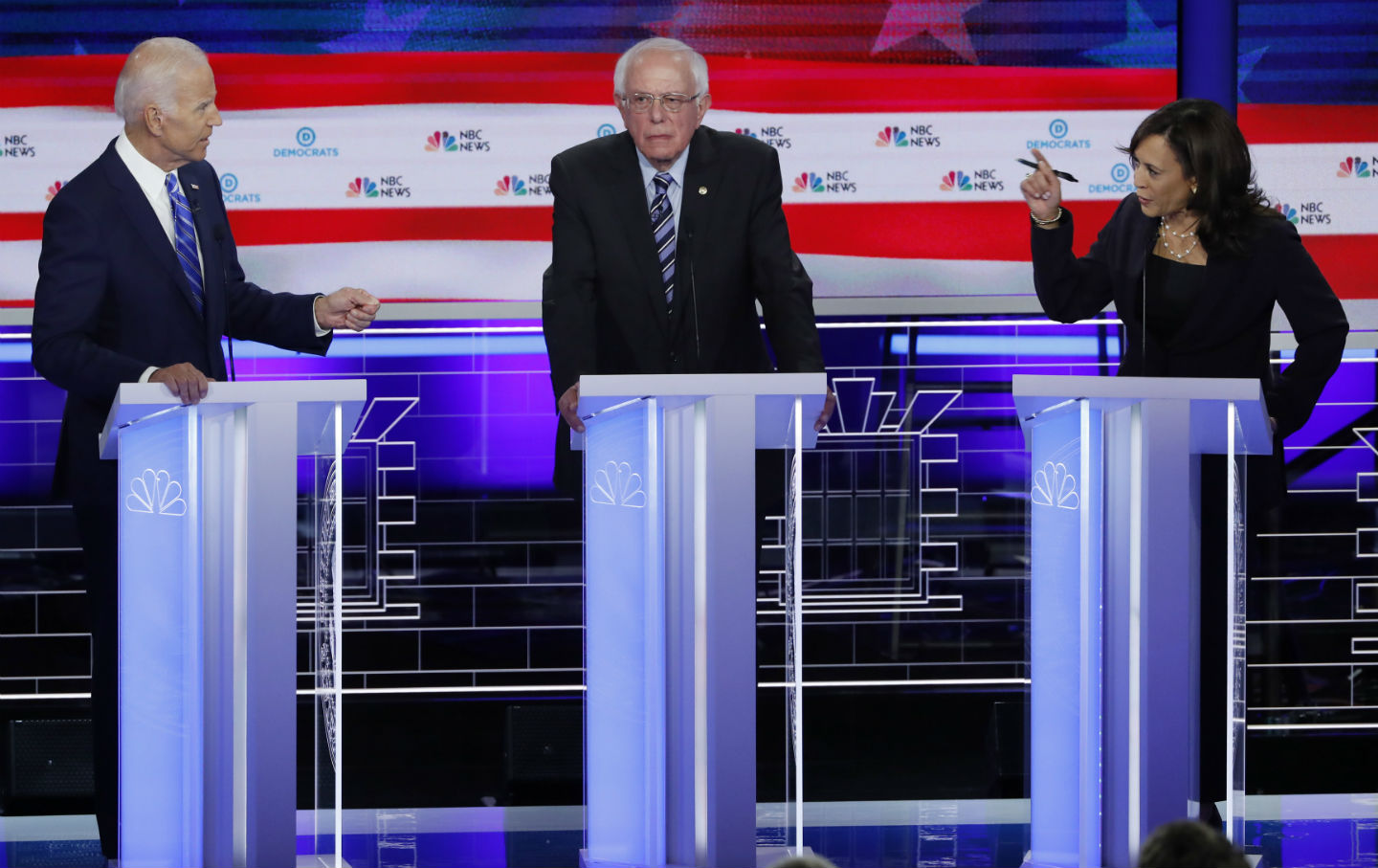 A debate featuring 10 candidates is an absurd event, one where it’s virtually impossible to have rational discussion or for any single candidate to get their message across. But on Thursday night, Senator Kamala Harris achieved the nearly unimaginable and broke through. She entered the debate as a second-tier candidate, polling well behind not just the front-runner, Joe Biden, but also Senators Bernie Sanders and Elizabeth Warren. After tonight, Harris has to be regarded as belonging to the top rank.

Harris broke through the din and confusion of a chaotic debate by foregrounding her talents as a prosecutor (she served as attorney general for California from 2010 to 2016). A good prosecutor knows how to hold a jury’s attention by dramatizing an argument, using his or her voice to underscore the seriousness of the stakes. Quickly summing up a polemical thrust is also a key skill. Harris must have been a superb prosecutor, because she had all those talents in full command.

In the debate, Harris went after two miscreants. One was the familiar target of President Donald Trump. In her closing statement, Harris said that “We need a nominee who has the ability to prosecute the case against four more years of Donald Trump, and I will do that.”

The other target for Harris’s forensic destruction was Joe Biden, who has been entangled in controversy over remarks he made celebrating his own ability to work with his ideological foes—citing two deceased racist Democratic lawmakers he worked with in the 1970s, James Eastland and Herman Talmadge.

The issue of race came up when Mayor Pete Buttigieg had to defend his record running a city where an African American man was recently killed by a police officer. Harris took the opportunity to shift the focus away from Buttigieg, a flailing candidate, and onto Biden.

“I’m going to now direct this at Vice President Biden, I do not believe you are a racist, and I agree with you when you commit yourself to the importance of finding common ground,” Harris said. “But I also believe, and it’s personal—and I was actually very—it was hurtful to hear you talk about the reputations of two United States senators who built their reputations and career on the segregation of race in this country. And it was not only that, but you also worked with them to oppose busing.” Harris then personalized the issue by noting that “there was a little girl in California who was part of the second class to integrate her public schools, and she was bused to school every day. And that little girl was me.”

Wounded by the attack, Biden was defensive. “I did not praise racists,” he responded. “That is not true, number one. Number two, if we want to have this campaign litigated on who supports civil rights and whether I did or not, I’m happy to do that.” Biden further claimed that he didn’t oppose busing in principle but only the federal government’s enforcing busing.

With her prosecutorial savvy, Harris zeroed in on that point. She started cross-examining Biden. The whole exchange is worth a close study:

BIDEN: Because your city council made that decision. It was a local decision.

HARRIS: So that’s where the federal government must step in.

If Biden goes down as a candidate, the start of his downfall will be this exchange. While progressives might be grateful for Harris’s service in popping the Biden balloon, her own record as prosecutor, notably her failure to go after corporate criminals, should still make them wary.

Even when not being pummeled by Harris, Biden came across as confused and unprepared. It’s telling that his campaign staff is already making private excuses to exonerate themselves for the fiasco.

The fact that Harris was willing to go after Biden so hard was a telling difference from Wednesday’s debate, where the field avoided challenging Senator Elizabeth Warren, the front-runner on that stage.

In fact, aside from former governor John Hickenlooper and (in a more muted way) Senator Michael Bennet, the other candidates were reluctant to challenge Bernie Sanders as well. As in the previous debate, the progressive left was clearly ascendant, and centrism in retreat. Like Warren, Bernie Sanders was setting the pace for the party on issues like health care. It’s telling that what was once considered under President Barack Obama the most radical Democratic position (the public option) has now become the default of the moderate wing of the party.

Bernie Sanders held himself well in the debate, but, like Warren, didn’t make an effort to dominate. It could be that being on the top tier of candidates, Warren and Sanders deliberately hung back so that their rivals could argue among themselves. That’s a tried and true method: In 1980, during the Republican presidential primaries, candidate Ronald Reagan was content to let the other candidates duke it out while he basked in his front-runner status.

Thursday was a great night for Harris and perhaps a good night for Sanders as well. If Harris brought down Biden, then it’ll make it easier for either Sanders or Warren to take the prize.