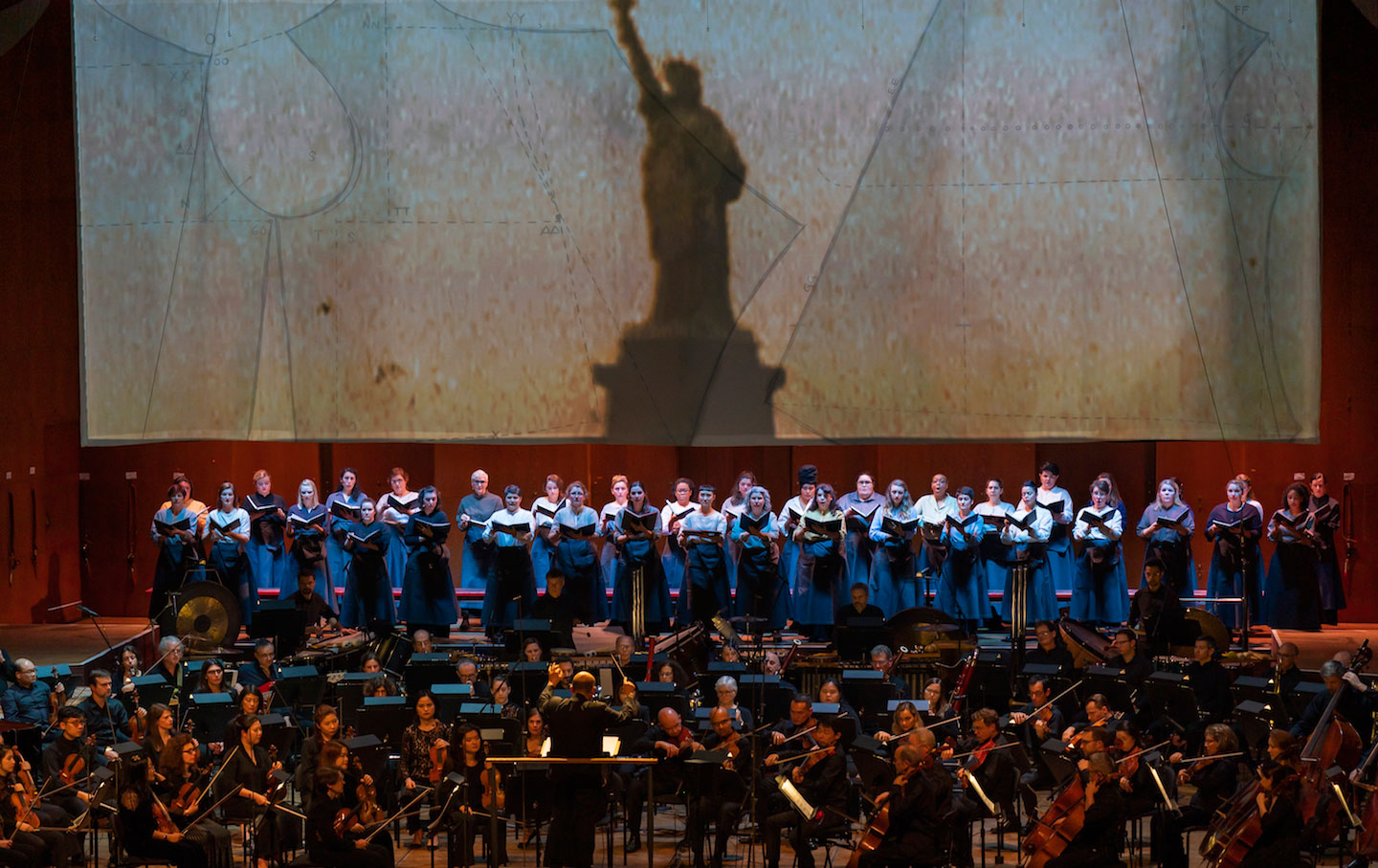 Julia Wolfe’s Fire in my mouth. (Photo by Chris Lee)

To take the title literally is to miss the main point of Fire in my mouth, the epic new oratorio by composer Julia Wolfe, which made its world premiere with the New York Philharmonic in January. Inspired by historical events at the Triangle Shirtwaist Factory in lower Manhattan, where 146 workers (many of them immigrant women) were trapped and killed in a workplace blaze in 1911, Fire in my mouth concludes with an evocation of the tragedy in music for symphony orchestra and chorus, accompanied by visual projections. The real climax of the work, though, comes before the inferno, when an army of raging workers—portrayed by a chorus of 146 women and girls dressed in period clothes—unites in an uprising to protest working conditions in the garment sweatshops. On an enormous screen hanging above the orchestra, we see the words of Clara Lemlich Shavelson, a garment worker and labor organizer, who led the protests with her oratory. Recalling the incidents in later years, she said, “Ah—then I had fire in my mouth.”

With no distortion of the historical record, Wolfe shifts the dramatic focus of a story that every middle-school history student in New York City knows, at least in part: She shows the garment workers not merely as helpless victims of industrial avarice and cruelty, but also as fearsome actors of resistance and agents of change. Wolfe has restored their voices, recasting their narrative as one of a defiant call for a better life. That the story ends with the deaths of 146 people serves only to amplify the force of that call.

Wolfe, who has been creating progressively ambitious works of adventurous but unpretentious music since she co-founded the Bang on a Can series of experimental-music concerts in the late 1980s, has taken up the theme of labor justice in several major compositions over the past decade. With Steel Hammer, which made her a finalist for the Pulitzer Prize for Music in 2010, Wolfe drew from elements of some 200 versions of the tale of John Henry, the African-American steel-driving man of legend, to construct a collage of words and music with cryptic, atomized grandeur. With Anthracite Fields, for which she won the Pulitzer in 2015, Wolfe considered the plight of coal miners in the Northeastern Pennsylvania region, not far from where she grew up. An impressionistic hybrid work, Anthracite Fields employs oral history, excerpts from a speech by labor leader John L. Lewis calling for tighter oversight of the coal mines, and journalistic materials for its text, with music that freely mixes the modal sonorities of Appalachian folk songs and rock rhythms with the sly unpredictability that’s part of the Bang on a Can tradition.

Wolfe, in short, has been steadily working up to Fire in my mouth. Still, it’s an accomplishment on a level unmatched in her previous work. Fire in my mouth is a monumental achievement in high musical drama, among the most commandingly imaginative and emotively potent works of any kind that I’ve ever experienced.

Constructed of four movements (“Immigration,” “Factory,” “Protest,” and “Fire”), the oratorio opens with the sound of slashing, high-pitched strings piercing the air. From the persistence of the music and the abstracted images of ocean waves on the screen, we soon pick up that we’re meant to feel the sense of anxiety in transatlantic travel for immigrants at the turn of the 20th century. At the same time, the string motif sets up the theme of slashing and piercing: cutting through things, cutting things apart, as the women at the Triangle Shirtwaist Factory will soon be doing with shears as pieceworkers, and later with their voices as protesters. The Music We Made in Lockdown

At the start of Fire in my mouth, a group of five singers stands on risers behind the orchestra, singing phrases from an excerpt of an interview with an immigrant and garment worker from the period, Mollie Wexler. “Without passports or anything, we took a boat,” they sing, repeating the phrase: “Without passports or anything.” These words drive home—in a visceral way—that undocumented immigrants, coming to America with little but their hopes, have been betrayed by the country they found long before Trump.

More and more women join the original group of five on the risers, and soon in front of the orchestra as well, until there appear to be as many singers performing as musicians in the symphony. (For this premiere, the chorus was a collaboration between women from the Crossing, the new-music chamber choir based in Philadelphia, and women and girls from the Young People’s Chorus of New York City.) The words and music increase in intensity with the second movement, “Factory.” For the final moments of this movement, the women all pull a large pair of shears from behind their backs, holds them above her head, and smacks them closed, opened and closed, in tight synchronization, piercing the air in multiple ways.

The title of the third movement, “Protest,” appears onscreen, and the women begin to chant over pulsing string music, in a rhythm so dynamic and tightly matched with the words that it feels almost like hip-hop: “I want to talk like an American, I want to look like an American, I want to sing like an American…” Additional voices emerge from the back of the concert hall, and we realize that more women are now marching forward, filling the aisles between the seats as they chant. Line by line, the exhortations in the text mount in urgency: “I want to shout like an American, I want to scream like an American…” The women are now turned to the left and the right, facing the members of the audience as they chant at full voice. I was quaking in my seat. To my right in the audience, one woman clutched both hands of the woman sitting next to her. Two rows in front of me, a man lowered his head onto the shoulder of his companion and turned his face away from the singers, as if they were too much to bear.

With the final movement, the expected tragedy came, with music appropriately blazing. The piece quieted down before long, though, and ended somberly, with the names of every worker who perished appearing on the projection screen. The Triangle Shirtwaist fire felt, unexpectedly, like a coda—not an anticlimax, but rather an elegy to the workers who, before they died, fought for their lives with emotional fire.