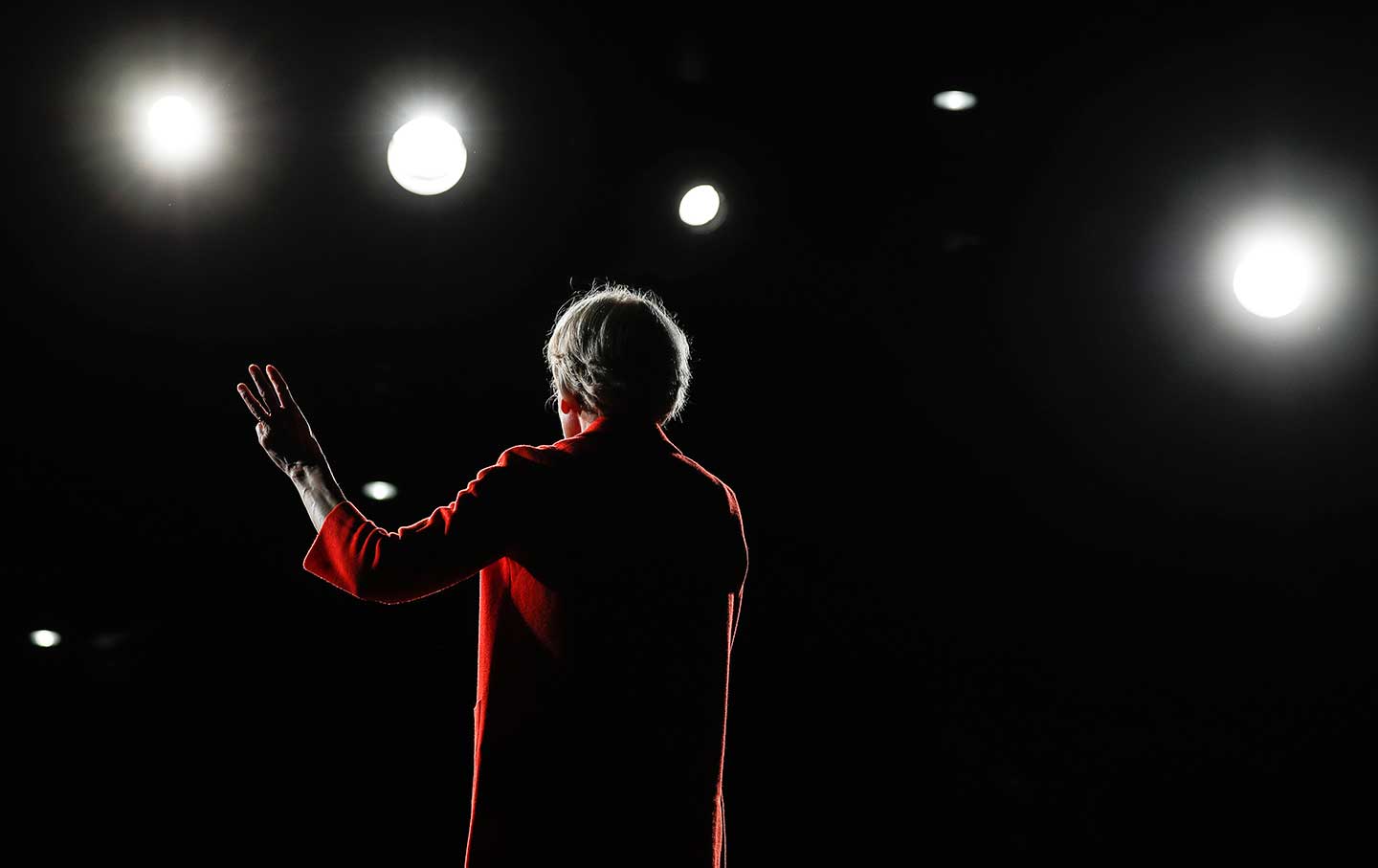 Elizabeth Warren speaks during a campaign stop on May 11, 2019, in Cincinnati. (AP / John Minchillo)

Massachusetts Senator Elizabeth Warren is moving up in the polls, but she won’t get to debate the candidates for the 2020 Democratic presidential nomination whom she hopes to displace: Vermont Senator Bernie Sanders and former vice president Joe Biden. Nor will Warren be on the same stage for the Democratic debates with the candidates who poll just behind her at this point: South Bend, Indiana, Mayor Pete Buttigieg and California Senator Kamala Harris.

The Democratic National Committee on Friday announced the matchups for the two nights of scheduled debates—on Wednesday, June 26, and Thursday, June 27—that could define the rest of the 2020 competition. Unfortunately, the format and approach chosen by the DNC for these first debates creates a chaotic and unequal circumstance that could make the formatting of debates more meaningful than what the candidates actually say.

Here’s one way of looking at things, using the Real Clear Politics average of recent polls: The first debate will feature 10 candidates with combined support of roughly 20 percent of likely primary voters and caucus goers. Warren, who is at 11.8 percent in the Real Clear Politics average, provides the star power. The next-closest Wednesday night contender is O’Rourke, at 3.5 percent.

The second debate will feature 10 candidates with combined support of roughly 65 percent. Biden’s at 32.3 percent, according to the RCP average, while Sanders has 16.5 percent. Buttigieg and Harris, at 7.8 and 6.3 respectively, are both way ahead of O’Rourke.

This is where things gets messy. Warren is in the middle of a top-tier race for her party’s presidential nomination, but she will be on stage with seven candidates who, in this week’s Quinnipiac Poll, are at 1 percent or less and two candidates, O’Rourke and Booker, who are closer to the back of the pack than the front.

For Warren, this creates a conundrum: Reviews of debate performances tend to focus on candidates who face off against one another. But Warren won’t be on stage with the candidates who are her chief competitors. What’s the smart strategy: Does Warren stir it up with O’Rourke and Inslee, both of whom will be trying to make their mark, or does she ignore them and aim higher? How many Democrats will be keeping scorecards so that they can compare and contrast after both debates are finished? How many will focus on Thursday’s “front-runners’ debate” and neglect Wednesday?

When the debate rosters were announced, CNN’s assessment suggested that “Biden, Sanders, Harris and Buttigieg—four of the top five candidates in the race, according to polling—are on the same stage, setting up a scenario where the Thursday night debate could receive outsized attention.” And they noted, “Biden and Sanders have also drawn the most fire from the other Democrats running for President, making it likely that the Thursday night debate could see the most fireworks.”

But this isn’t just about Warren, whose focus on policy has been so creative that she might still stand out. As long as we are asking questions, how about these: Do candidates like Hickenlooper, who wants to stir it up with Sanders over democratic socialism, and Yang, who has a distinctive message, get an advantage by being grouped with the front-runners? Do candidates like O’Rourke and Booker, prominent figures with some support who are looking to gain traction, and Gabbard, who has a distinctive message of her own, get further marginalized by being far from most of the front-runners? And do these advantages and disadvantages decide who garners the attention and poll numbers that are necessary to get into the next debates?

If the answer to that last question is “yes” for one or more of the contenders, which certainly seems reasonable, then the luck of the draw could be every bit as definitional as ideas or even debating skills. That’s not fair, and it’s not particularly smart politics.

So here are the most important questions of all: Could the DNC have come up with a better approach? And could consideration of better approaches improve the rest of the debates on a long Democratic schedule? The answer to the first question is “yes.” The answer to the second question is “hopefully.” Dividing 20 candidates into two groups of 10 was never going to be fair or functional. There would always be candidates who would luck out, or luck in. There was always going to be unfairness. The DNC’s argument was that some sorting is necessary. But does anyone really think that 10 candidates trying to be heard over five moderators and over one another during the course of 120 minutes will avoid chaos? Does anyone think that Bennet will get as much attention as Biden, or that Delaney will get as much attention as Warren?

So what’s the better way? Single-issue debates. Instead of bouncing all over the place, as moderators ask “of-the-moment” questions (“What do you think of the president’s tweet?”) and candidates grab desperately for attention (by piling on Biden or by echoing Trump’s attacks on democratic socialism), how about a series of two-hour debates that put all the candidates who meet a fair threshold on one stage and that force them to lean into issues such as climate change, immigration, economic inequality, and criminal-justice reform?

Instead of a bunch of moderators taking up a bunch of time, why not one highly engaged questioner (and an even more highly engaged timekeeper) steering the candidates into deeper discussions? How about NARAL Pro-Choice America president Ilyse Hogue leading the candidates through a discussion of threats to abortion rights and how they would counter them? How about Congresswomen Alexandria Ocasio-Cortez pressing the contenders on climate change and the Green New Deal? How about Congressman Jamie Raskin getting everyone focused on the Supreme Court?

Don’t think that would work? OK, how about we take the four hours allotted over two nights and just do a series of 10-minute conversations where individual candidates make their cases in a Q&A setting with Bill Moyers? Or Hasan Minhaj? Or Stacey Abrams?

The DNC is planning for a dozen debates. They’ll eventually get around to predictably awful, standard-format forums. But it would have been so much better if they started with fair and functional discussions where good ideas might matter more than bad formatting. And it is still possible that, going forward, a better approach could be found.