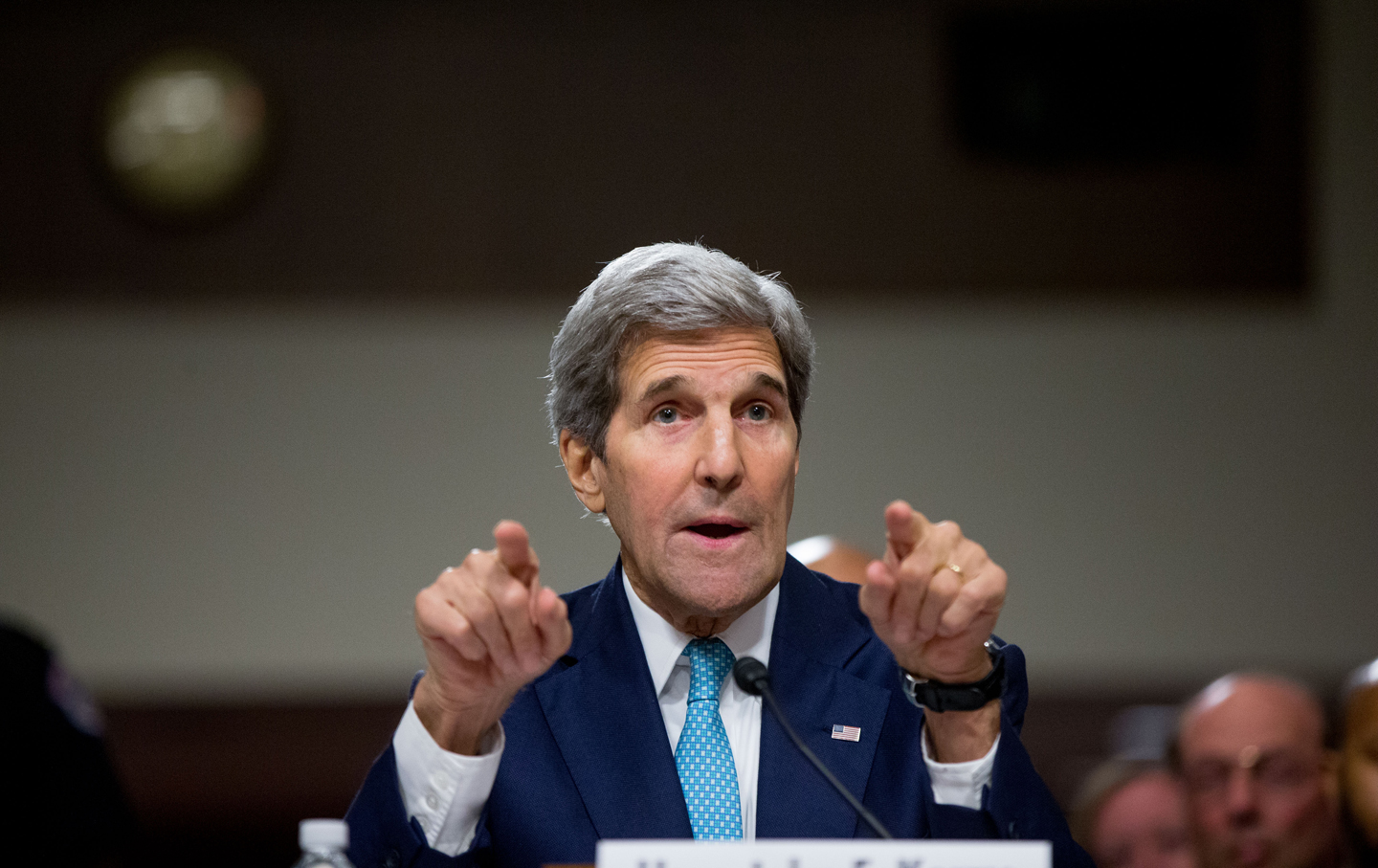 The most hotly anticipated congressional hearing since Secretary of State Hillary Clinton’s January 2013 testimony on Benghazi took place this morning on Capitol Hill.

Secretary of State John Kerry and Secretary of Energy Ernest Moniz appeared before the Senate Foreign Relations Committee alongside Treasury Secretary Jack Lew to make the Obama administration’s case for the P5+1 nuclear agreement with Iran.

The hearing showed, as if more evidence were needed, that Washington’s war party is nothing if not ecumenical. Not content with setting its sights on Putin’s Russia and Assad’s Syria, it is now taking aim at the recently concluded Joint Plan of Action with the Islamic Republic of Iran which, among other things, strips Iran of 98 percent of its enriched uranium stockpile and removes two-thirds of its centrifuges.

Prior to the deal, as Kerry and Moniz pointedly noted in The Washington Post yesterday, Iran “had mastered the nuclear fuel cycle, had constructed a covert uranium enrichment facility inside a mountain” and “was on its way to installing nearly 20,000 centrifuges for uranium enrichment.”

Still on crutches from his bicycle accident in May, Kerry entered the hearing to loud applause and shouts of “Thank you, John Kerry” from a lively contingent from Code Pink. Yet that would be about all the praise Kerry would receive for the remainder of the day.

In his testimony this morning, Kerry noted that by the time the talks resumed in earnest two years ago, Iran already had “enough fissile material to build 10 to 12 bombs.” Kerry testified that the goal of the negotiations was to dismantle Iran’s ability to pursue a nuclear weapon, not to dismantle its entire nuclear program. And for good reason. Iran, a signatory the Nuclear Non-Proliferation Treaty since 1968, has every right to pursue a nuclear energy program under international law.

Tell Congress: Do Not Sabotage Diplomacy With Iran.

Committee Chairman Bob Corker (R-TN) began the hearing by launching into an extended list of grievances, among them that the administration brought the deal to the United Nations prior to gaining congressional approval; that the briefing he received last night was “inadequate”; that he believes the deal codifies the industrialization of Iran’s nuclear program; and that the West “loses all leverage” over Iran once sanctions are removed in nine months.

Some observers had been holding out hope that Corker might emerge as a moderate and try to lend support to the agreement. The redoubtable Elizabeth Drew, writing recently in The New York Review of Books, observed that Corker “seemingly wants to play the part of the responsible statesman, following in the footsteps of, say, Richard Lugar.”

Any such hopes should have been dashed by his performance today.

In his opening statement he primarily blamed Iran for the American casualties suffered during the Iraq war. He then cited Iran’s alleged complicity for what happens within Syria’s prisons. Declared Corker: “People’s genitals right now are being amputated—that is happening right now, at this very second in a prison in Syria.”

Left unsaid by Corker was that the Bush administration was all too happy to make use of those very same Syrian prisons as part of the CIA’s rendition program during the first years of the “Global War on Terror.”

Corker then went on to directly insult Kerry, alleging that he was “fleeced” by the Iranians. More accusations followed. Senator Jim Risch (R-ID) called supporters of the deal the “most naive people on the face of the earth.” To Kerry and Moniz (who holds a PhD in theoretical physics), he declared, “You guys have been bamboozled.”

Senator Marco Rubio (R-FL) denounced the deal as making the world “a more dangerous place” because the negotiators “repeatedly capitulated” to Iranian demands. Rubio declared that Iran should be made aware that next president (meaning, he thinks, him) is “under no legal or moral obligation” to abide by it.

Enduring a fusillade of invective, Kerry wondered aloud if the chairman had factored in any time allowing for the witnesses to answer.

Kerry was repeatedly obliged to push back against the accusation that he had mislead the senators over the terms of the inspections regime, noting that he had never uttered the alleged “anywhere, anytime” guarantee. In fact, as his colleague Moniz pointed out, it was he who uttered it. Putting it in its proper context, Moniz testified, “I said access anywhere, anytime in the sense of a well-defined procedure and well-defined time window to resolve it.”

Nevertheless, the deal’s critics are doing their level best to paint the deal in the worst possible light, using the alleged lack of an “anywhere, anytime” inspections guarantee to batter the agreement.

Critics of the deal, like those prominently featured in yesterday’s New York Times report by Michael R. Gordon, believe that a provision within the agreement that gives Iran 24 days to allow access to weapons inspectors may enable it to pursue an illicit nuclear weapons program without detection. Unmentioned by the critics, congressional and otherwise, is that as part of the deal, the International Atomic Energy Agency can request access to any suspicious location with 24 hours’ notice under the Additional Protocol of the Nonproliferation Treaty.

In any event, as Kerry repeatedly emphasized, the choice before Congress and the American people is a stark one: It is either this deal or war. And the latter option is really no option at all, since Iran already knows how to create a nuclear weapon, and, as Kerry bluntly told the committee, “We can’t bomb the knowledge away.”