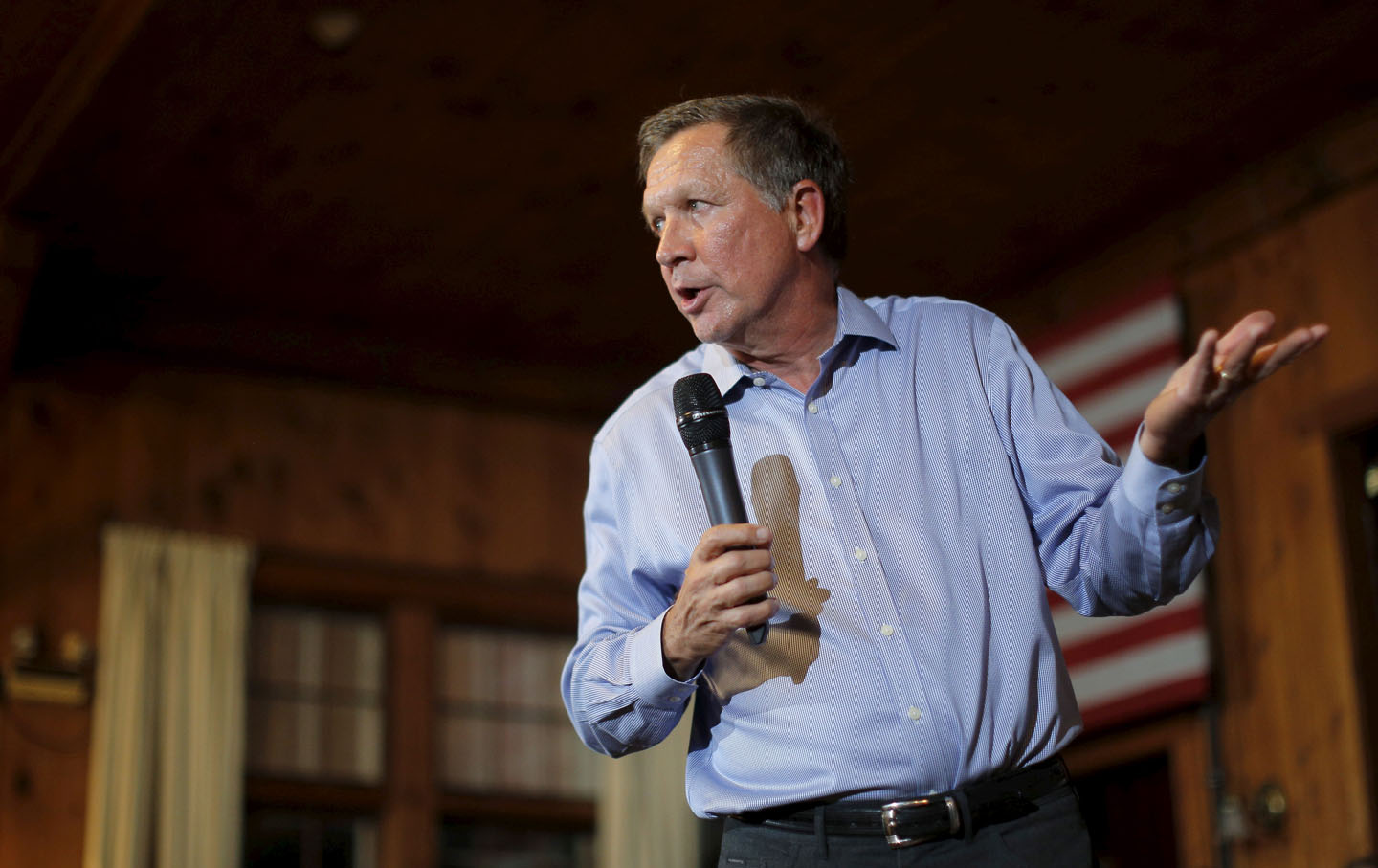 During a campaign stop in New Hampshire last month, presidential hopeful John Kasich was confronted by a libertarian voter who said he wants to support a fiscally conservative candidate who’s “not a threat to a woman’s right to control her own body.” In response, Ohio’s Republican governor said of access to abortion, “Obviously, it’s the law of the land now, and we live with the law of the land.”

Despite that evenhanded answer, Kasich is no moderate when it comes to abortion rights. Back home in Ohio, he has consistently supported his Republican colleagues in the state legislature as they chip away at Roe. In the past two years, the number of clinics providing surgical abortions in Ohio has dropped from 14 to nine. If an antichoice measure included in a budget bill passed this summer is allowed to stand, that number could dwindle even further, to just seven clinics by the end of the year. Last week, Planned Parenthood of Southwest Ohio and Women’s Med Group in Dayton filed a lawsuit in an effort to keep that from happening.

Between them, the two clinics provide an estimated 5,800 abortions per year and a range of other reproductive-health services. The suit filed Tuesday asks a federal court to declare recent laws limiting access to abortion in Ohio unconstitutional. At issue is a state law requiring clinics to have written transfer agreements with local hospitals. (Like the admitting-privileges requirements that have popped up in Alabama, Texas, and other states, the transfer agreement is a regulation meant to force abortion providers into shutting their doors.) In 2013, Ohio’s legislature banned public hospitals from entering into such agreements. Private hospitals, which are often Catholic institutions, have a track record of rejecting or ignoring clinics’ requests, according to the complaint. The state health department, run by a Kasich appointee who lacks any medical or public-health background, has the discretion to grant a clinic what’s called a variance, a kind of waiver of the transfer agreement requirement that must be annually renewed.

As if that’s not enough of a bureaucratic mess for providers to navigate, the state legislature recently made it even harder for the staff at clinics to do their jobs. On June 30, Kasich signed into law a budget bill that includes yet another abortion restriction. The health department is now required to approve an application for a variance within 60 days. If the application is rejected or if the clock runs out, that clinic loses its license immediately and has no right to appeal. According to a recent editorial in the Toledo Blade, “The variances often take months to approve and are deliberately ignored by Ohio’s anti-choice health department.”

The two remaining providers in the southwestern part of the state know this waiting game well. A Planned Parenthood clinic in Cincinnati and the Women’s Med clinic in Dayton have been granted variances, or exceptions, and depend on timely renewals to keep their doors open past this fall. If the Planned Parenthood clinic closes, Cincinnati will be the largest metropolitan area in the country without a surgical abortion provider. And those among the 2.1 million people who live in the metro area and who want an abortion will then have to clear all the usual and intended roadblocks: They will have to travel 220 miles roundtrip to a clinic in Columbus. They will need to make multiple trips or pay for a hotel room, because state law requires counseling and an ultrasound and a 24-hour wait between that appointment and the procedure itself. Patients who are more than 16 weeks pregnant will need to travel even further, a 502 miles roundtrip to Cleveland.

Proponents of TRAP laws such as those at work in Ohio portray them as an effort to simply make sure that clinics are being appropriately regulated. But if there was any question about the true goal of these labyrinthine requirements, one local antichoice activist last week cleared up any confusion. Paula Westwood, director of Right to Life of Greater Cincinnati, told WCPO that providers shouldn’t be granted variances because abortions are “physically, emotionally and psychologically damaging to women, and terminal for their unborn babies.”

Unfortunately, we can’t expect as much honesty from candidate Kasich, who will likely keep trying to sanitize his image for the national stage.