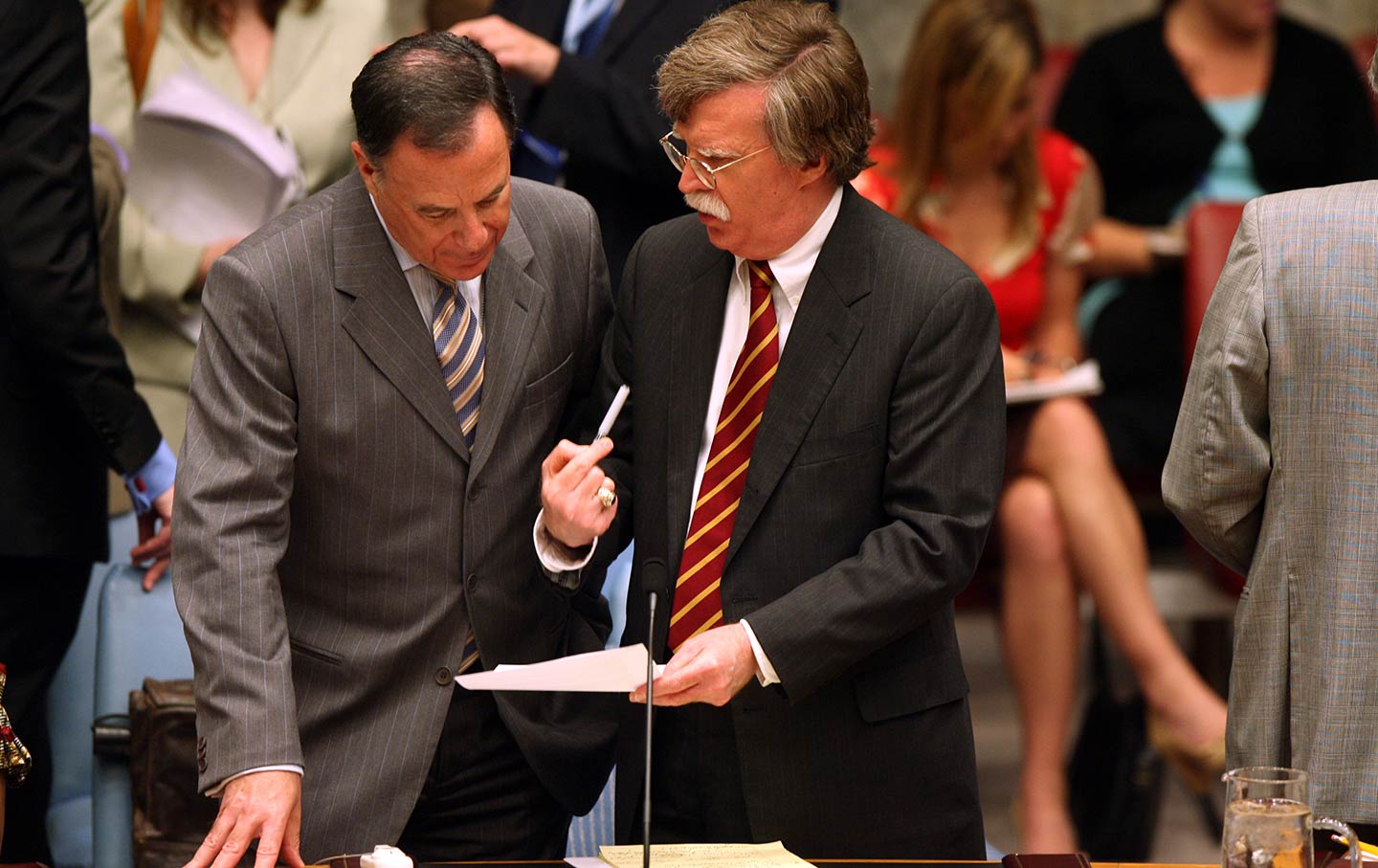 John Bolton, right, speaks to Dan Gillerman, Ambassador to the UN, prior to a Security Council meeting in 2006. (AP Photo / Mary Altaffer)

In an ominous coincidence of timing, John Bolton assumed his role as national-security adviser on Monday, right as news broke of an air strike on a military airport in Syria operated by Iran, widely assumed to be carried out by Israel, and just two days after 70 Syrians died and hundreds more were wounded in an apparent chemical attack by the Assad regime in Douma. Exchanges of blame and threats between Russia, Iran, Israel, and the White House have overshadowed the consternation and horror with which many in Washington have reacted to Bolton’s appointment.

Representative Brendan Boyle (D-PA) called Bolton a “dangerous radical” who pushes “fringe conspiracy theories”; Senator Bernie Sanders said his appointment “should scare everyone”; and the former chief White House ethics lawyer under George W. Bush, Richard Painter, tweeted that “John Bolton was by far the most dangerous man we had in the entire eight years of the Bush Administration.” In The New Yorker, Robin Wright describes Bolton as “arguably the most abrasive American diplomat of the twenty-first century,” and an opinion piece in The Washington Post calls him the second-most-dangerous man in America.

What few have pointed out is the fact that Bolton’s track record as a preemptive-war fiend and his contempt for much of the Muslim world are deeply rooted and maybe best reflected in his unflinching support for Israel’s military operations and posturing in the Middle East. Bolton has pointed to Israel’s 1981 bombing of the Osirak reactor in Iraq and its 2007 bombing of a reactor in Syria (which Israel just formally confirmed for the first time) as models of good practice. Bolton will presumably support whatever military action Israel wants to take in Syria and elsewhere, framing it as being in America’s national interests.

Indeed, Bolton’s bellicose approach to foreign policy—chiefly his adamant calls to bomb Iran, contempt for the United Nations, vehement opposition to the Iran nuclear deal, and anti-Muslim sentiments—are all remarkably similar to those of Israeli Prime Minister Benjamin Netanyahu’s government and make him a bona fide pro-Israel hawk.

It is therefore not surprising that, while most foreign governments conveyed concern over Bolton’s appointment, top ministers in the Israeli government expressed giddy approval. Netanyahu, who also serves as foreign minister, has not commented publicly on the appointment, but an Israeli official in the Prime Minister’s Office told me that “the prime minister met Bolton several times over the last decade and they are on friendly terms.”

Bolton’s “passion for Israel dates back long before he became ambassador to the UN.” —former Israeli UN ambassador Dan Gillerman

According to former Israeli ambassador to the UN Dan Gillerman, who first met Bolton when the latter served at the UN between August 2005 and December 2006 under George W. Bush (a recess appointment that never got Senate approval), Bolton’s “passion for Israel dates back long before he became ambassador to the UN.” In 1991, while Bolton served as assistant secretary of state for international organization affairs under President George H.W. Bush, he helped bring about the repeal of the 1975 UN “Zionism is racism” resolution, instantly and enduringly currying him favor with the pro-Israel community—to the point that during his confirmation process 15 years later, the American Israel Public Affairs Committee (AIPAC), the American Jewish Committee, and the Anti-Defamation League (ADL), among others, abandoned their policy of not taking a position on such nominations and rallied to get Bolton confirmed.

“There was more than one case where [Bolton, as Washington’s UN ambassador] went against the State Department.” —Gillerman

Gillerman says he and Bolton developed a close relationship at the UN and often consulted each other, and continue warm relations to this day. Gillerman openly and approvingly admits that on several occasions Bolton undermined the Bush administration and provided information to Gillerman in order to help Israel avert moves by the United States that Bolton considered detrimental to Israel.

“There was more than one case where he went against the State Department,” Gillerman told me, pointing to the most prominent example during the 2006 Israel-Lebanon war, when Secretary of State Condoleezza Rice was working with the French on UN Resolution 1701 for a cease-fire. Gillerman says Bolton asked to meet at his home and urged him to call then–Israeli Prime Minister Ehud Olmert in the middle of the night to tell him to pressure President Bush to change the draft of the resolution. This move provided Israel a few extra days to carry out a military operation in Lebanon before the cease-fire was reached. Rice corroborates in her memoir that Bolton was leaking information to Israel. (She could not be reached for comment.)

Just imagine the backlash that would have come from the White House, Israel, and the pro-Israel complex had an American official gone behind the backs of his seniors to provide information to Palestinian government officials about an impending US move. But such behavior fits into Bolton’s broader pattern of efficient craftiness and maverick misconduct that has been reported on over the years and is now resurfacing—including bullying and intimidation of those who stand in his way, and skewing information to make it fit his agenda.

When I asked Gillerman if he is concerned that his account could reflect poorly on Bolton, as someone who puts Israeli interests ahead of American ones, Gillerman said, “American and Israeli interests on Iran are the same.” Whether that’s true or not, it certainly seems to reflect the views of the current Israeli and American administrations. It also demonstrates not only how far to the right Israel is on the global political spectrum, but also how deeply rooted pro-Israel politics are in Washington, that an Israeli official feels perfectly comfortable boasting about what in any other scenario would be considered unacceptable—and thus downplayed.

Lawrence Wilkerson, a retired US Army colonel and chief of staff for Colin Powell when Powell was George W. Bush’s secretary of state, has been outspokenly critical of the Bush administration’s execution of the Iraq War (and argues that similar deceitful tactics are now being used by the Trump administration to drum up a war with Iran). Wilkerson says, “You never want another country’s interest to be your own. Bolton espoused views like that,” adding that he believes Bolton is “motivated more by power and opportunity—but he’s got ideology in his back pocket. Part of that ideology is that a good lie, told enough times, will persuade enough people to do what you want them to do. It’s perfectly fine, though it’s a lie, because the end justifies the means.”

In this sense, whether Bolton is consciously putting Israel’s interests first or whether he believes they are identical to American interests doesn’t really matter. The outcome is the same.

While Bolton was considered a hawk among hawks during the George W. Bush administration, set against the background of the Trump White House, his views are not that extreme. As Harvard professor of international affairs and co-author of The Israel Lobby and U.S. Foreign Policy Stephen Walt told me, “When he writes something it goes into The Wall Street Journal—not some crazy website. He’s on the far right end of the consensus view. But he’s not outside the consensus.”

That far-right end syncs flawlessly with Trump’s policies on Israel. Bolton’s long-standing opposition to the establishment of a Palestinian state and emphatic endorsement of the US embassy move to Jerusalem make him just another in a string of pro-occupation officials like David Friedman and Nikki Haley. Bolton also has the support of Republican mega-donor Sheldon Adelson, who is Benjamin Netanyahu’s notorious patron and has become one of Trump’s biggest donors. “If you want to get ahead in American foreign-policy circles, you need to prove yourself on Israel,” Walt added. Bolton certainly has.

AIPAC has remained predictably silent about Bolton’s new position in the Trump White House (AIPAC did not respond to request for comment, though Bolton spoke at the group’s recent annual conference). Jonathan Greenblatt, chief executive and national director of the ADL, wrote a Washington Post op-ed calling on Bolton to “clearly repudiate anti-Muslim conspiracy theories,” referring to his role as chair of the Islamophobic Gatestone Institute and also noting his ties to anti-Muslim hate-monger Pamela Geller. But Greenblatt also made a point of noting Bolton’s “strong record of support for Israel.” (The liberal Israel lobby J Street and a few small progressive American Jewish organizations immediately came out against Bolton’s appointment, condemning his approach to the Israeli-Palestinian conflict as well as his Islamophobia and militarism.) Gillerman, who describes Bolton as a “man of principle,” said he has no idea who Geller is and is unaware of any anti-Muslim rhetoric—hard to believe, considering the ample public evidence.

It is noteworthy that Bolton also served on the advisory board of Secure America Now, a secretive, far-right, anti-Islam group that OpenSecrets.org recently revealed received its largest donation from pro-Trump multimillionaire Robert Mercer—who has also bankrolled Breitbart and Cambridge Analytica. SAN also received a hefty $1.1 million from Estée Lauder heir and World Jewish Congress president Ronald Lauder—further evidence of the strong link between being anti-Muslim, pro-Israel, and pro-Trump.

While many are horrified by Bolton’s hyper-nationalism, his callous militarism, and his open contempt for diplomacy and international law—qualities that also fairly describe the prevailing mood in Israel today—his “stellar” pro-Israel record is rarely discussed. Bolton’s appointment exposes how detrimentally uncritical and silent Washington is on Israeli policies. If the media were doing their job, they would highlight Israel’s role in Bolton’s political career and the fact that American and Israeli interests are not, and probably should never be, identical.