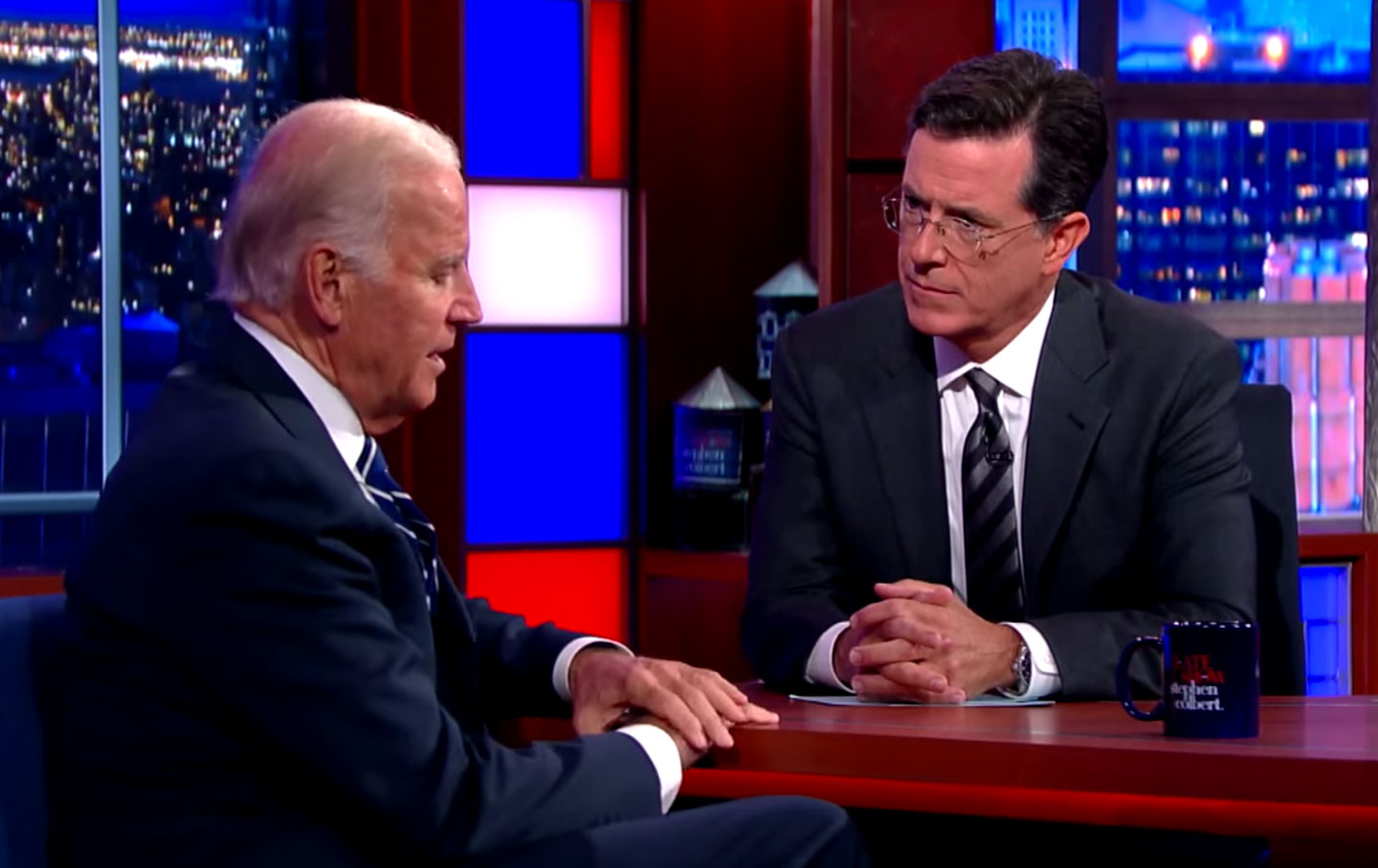 After the first two episodes of The Late Show with Stephen Colbert, I thought Stephen had been pretty well Gullivered by the format of the CBS late-night talk show. He wasn’t as funny as he had been on the densely satirical Colbert Report, and the scale of his achievement on Comedy Central made it difficult for him to fit easily into the role of celebrity chatty buns. Both George Clooney and Scarlett Johansson kept shooting uncomfortable glances at Colbert when he asked what seemed to be straight fanzine questions, as if they were wondering if he was somehow subtly setting them up. Would the brilliant satirist who had bearded George W. Bush in the den of the White House Correspondents Dinner in 2006 really let them get by with just talking about their fame? We’d already heard that Hillary Clinton was too smart to take such a risk—she turned down Colbert’s invite to appear on his premiere, electing to do Jimmy Fallon on the night of the September 16 Republican debate instead.

But then, last night, came Colbert’s interview with Joe Biden, and now I’m just not sure. It was one of the most heartfelt and raw interviews ever conducted on late-night—or any time of the day—television. As Biden has done in recent weeks as he ponders whether to run for president, the still-grieving father spoke about his son Beau Biden, who died in May of a brain tumor, and about how Beau had survived the car crash that took the lives of Joe’s first wife and their 1-year-old daughter in 1972. Biden said no one should run for president unless they could give their whole heart, soul, energy and passion. “I’d be lying if I said that I knew I was there.”

This time, however, Biden was talking with Colbert, who had lost his father and two of his brothers in a plane crash at age 10, and together these two practicing Catholics went into a prolonged, deeply personal meditation on the nature of suffering and faith.

It was an interview, if that’s even the word, that no other TV host could have pulled off. Colbert asked questions that in others’ mouths would sound saccharine or forced but here came off as authentically direct. And it ended with Colbert practically begging Biden to run, and to do so because of his suffering—an idea so Catholic in its framing (according to my lapsed Catholic husband) as to be almost heretical on late-night American TV.

“It’s going to be emotional for a lot of people if you don’t run,” Colbert said. “And sir, I just want to say I think your experience and your example of suffering and service is something that would be sorely missed in the race.”

You don’t have to be Flannery O’Connor to pick up hints of resurrection in last night’s Late Show. So many of Colbert’s fans feared that his humor and insight would die along with the right-wing blowhard character he played, that it’s been thrilling just to have him back night after night, even if in a slightly less manic and hilarious form. And Biden’s long tease about the possibility of running, after years of bowing to Hillary Clinton’s domination of the Democratic Party, is itself a kind of resurrection. As Colbert suggested, a leader who has been humbled by suffering—suffering more real than enduring bad poll numbers—might be what the country needs right now.

The Biden interview was so compelling, it’s even made me reconsider the Clooney and Johansson appearances. Maybe there was something Warholian about Colbert’s getting Clooney to agree that, although they didn’t really know each other, they had to pretend a chummy camaraderie on air because that’s dictated by the late-night conventions. After giving the movie star a Tiffany’s paperweight inscribed with the words “I DON’T KNOW YOU,” Stephen said he and Clooney would “always have something to talk about because we’re famous.” Then they both pretended to have nothing at all to say. Or maybe it wasn’t pretending.

Colbert’s playing an obtuse right-winger all those years with such unerring aplomb has made us more interested in who he really is as a person, since the character was a sort of stencil Rorschach blot of who he is in real life. And the performer who mocked Representative Steve King during congressional hearings on migrant farm workers, while raising money for veterans and to fight global poverty (he’s one of the lead hosts of the Global Citizens Festival in New York on September 26), has a sort of reverse celebrity heft that can be very formidable.

So when Colbert asked Johansson about her glamorous lifestyle, she at first tried to say it only seems glamorous—jetting from Paris to New York to appear on a talk show—and then quickly realized it was ridiculous to pretend it wasn’t. Being a celebrity is incredibly fortunate, by almost every measure. The clever dissection of show-biz vanities recalled the old Garry Shandling Show, on which Jon Stewart played a hard-working comic guest host with great ideas for updating the formula (that never made it on air because they made his boss uncomfortable).

Casting Colbert in the role of a late-night TV talk show host seemed at first a little like casting William Shatner for T.J. Hooker—how can you put Captain Kirk in dress blues as a neighborhood cop in LA and get anybody to feel comfortable with that? But maybe Colbert has the potential to turn even vacuous celebrity interviews into a kind of performance art.

In a remarkable Colbert profile for GQ, Joel Lovell wrote:

He said he trained himself, not just onstage but every day in life, even in his dream states, to steer toward fear rather than away from it. “I like to do things that are publicly embarrassing,” he said, “to feel the embarrassment touch me and sink into me and then be gone. I like getting on elevators and singing too loudly in that small space. The feeling you feel is almost like a vapor. The discomfort and the wishing that it would end that comes around you. I would do things like that and just breathe it in.” He stopped and took in a deep yogic breath, then slowly shook his head. “Nope, can’t kill me. This thing can’t kill me.”

The late-night format evolved to help viewers feel that, at the literal end of the day, things aren’t really so bad. They could now go to sleep. The apparent casualness of the form itself allow the guests to laugh off any awkwardness. To do that for an hour or more five nights a week requires a lot of air—which breezes in most easily in chitchat with movie stars. They poof up time like blow-drying poofs up Trump’s hair.

But here’s the thing: All of these Late Show bits—from the celebrity fluff to the occasional Leno-esque crack in the monologue (Colbert: Willie Nelson claims to market the best pot on earth, and all he asks in his packaging is that if you find any better, send it to him)—could have come straight outta The Colbert Report. The political satire, like Colbert stuffing his face with Oreo cookies to parody the media’s Trump addiction, is almost identical in content and execution. But the constraint of a 22-minute time frame on the old show made for a very tightly written joke-vise that compressed the carbon of the even the weak bits into diamonds.

Now we have expansion. With that extra time, Colbert will occasionally flop, and at other times, as with Joe Biden, he’ll outshine the format and most other television.

Colbert, who along with Jon Stewart is one of the best media critics around, is exquisitely aware of all this, and he’s not afraid of failure. “You gotta learn to love when you’re failing,” he said in GQ. “The embracing of that, the discomfort of failing in front of an audience, leads you to penetrate through the fear that blinds you. Fear is the mind killer.”

And because he’s so willing to fail, he probably won’t.