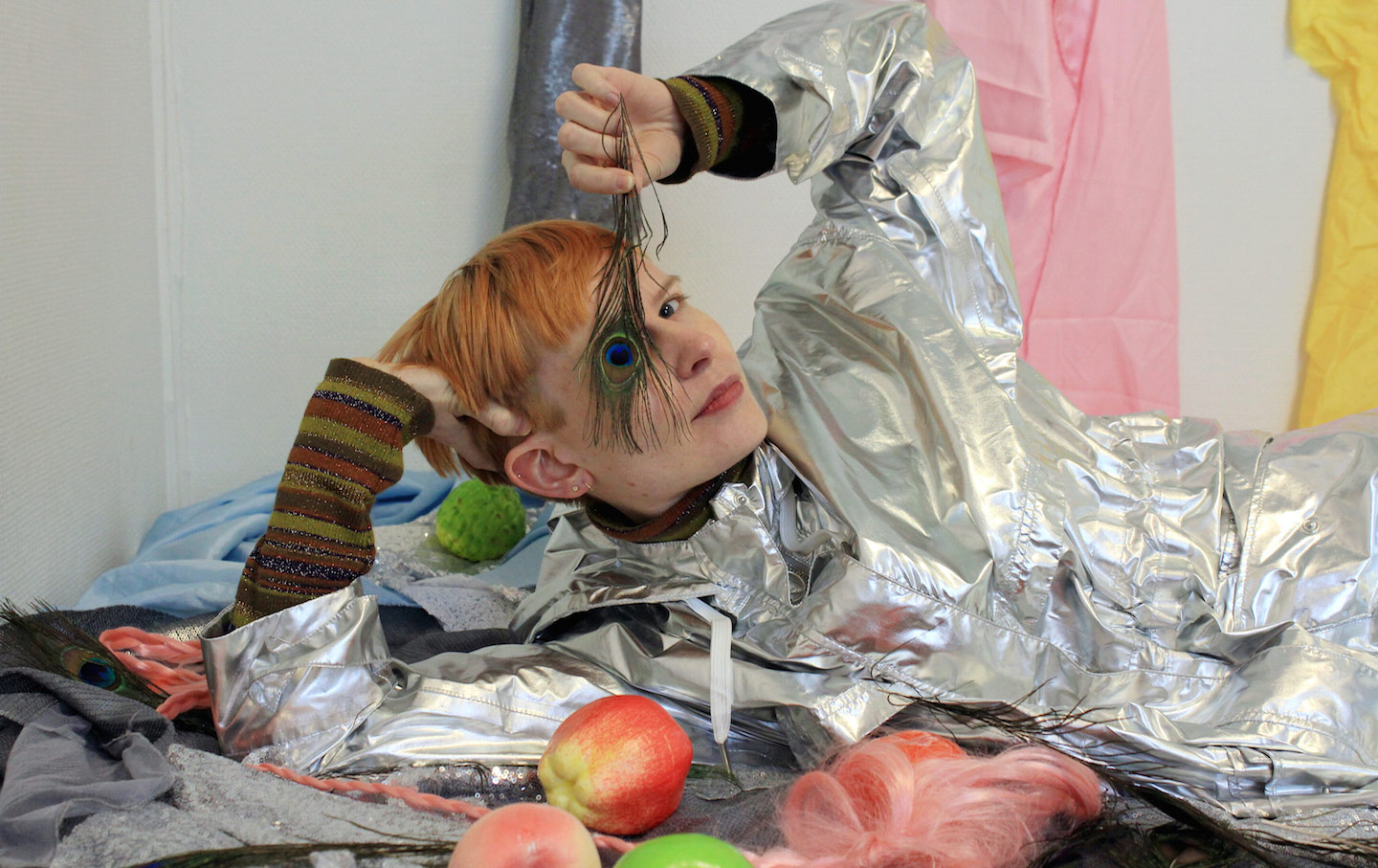 Jenny Hval. (Courtesy of the artist)

In Paradise Rot, a young university student named Jo has her first queer sexual experience in an apartment slowly filling up with creeping moss and fungi. At its simplest, this debut novel by the Oslo-based musician Jenny Hval is about a libidinal awakening. But the book, drawing elements from pulpy romance novels, the Book of Genesis, and magical realism, is also the origin story of a world born of queer desire. As Jo and her roommate Carral grow closer and closer, their damp apartment becomes ever more fertile, slowly transforming into an ecosystem unto itself. Their home is a warm bubble inside the cold fictional English town of Aybourne, and within that bubble, Jo slowly loses all sense of distance and separation from the object of her desire.

The novel very much mirrors the world that Hval has created in her work as a recording artist. Best known for the playfully cerebral avant-garde pop albums she’s released over the last decade, Hval explores intimacy and desire while embracing the repulsive along with the banal. “In the doctor’s office / Speculum pulls me open,” she sings on her 2016 song “Period Piece.” “Some people find it painful / But all I feel is connected.” It’s no wonder, then, that in Hval’s literary vision, love is driven by a focus on the eroticism found in the quieter details of domestic life: the sounds of fabric against skin, water dripping, tea mixing with milk, urine streaming into a toilet bowl. In these everyday acts, she finds something wondrously carnal to marvel at: “When she dipped her tongue in the surface of the warm milk and licked up the skin,” Jo observes of Carral, “I felt the tip of my own tongue get warmer, and when she closed her mouth I could almost feel the milk skin against the roof of my mouth, like slimy cigarette paper.”

Although it was written early in Hval’s musical career, Paradise Rot is a compendium of the imagery and themes that have long run through her discography: queerness and feminism, a stark focus on the human body and its fluids, and the continuum between innocence and corruption. Originally published in Norway in 2009—when Hval was releasing music under the stage name Rockettothesky—the novel is evidence of just how long she has been turning these concepts over in her mind. It also marked the transition to releasing music under her own name. Her first album as Jenny Hval, 2011’s Viscera, can be seen as an extension of Paradise Rot’s love story: “Golden locks / Dripping, melting out of me / Golden showers,” she sings on the song “Golden Locks,” over soft guitar arpeggios. The language clearly mirrors the fixations that Jo develops as she falls in love: “I dreamt of Carral’s golden hair locks twisting around me like a warm golden exoskeleton,” she remarks at one point as the two become inseparable. “When I woke up, our bodies were clammy and damp. The mattress stank of urine.”

Moisture is the vehicle by which the main characters find connection, as well as the reason their small home starts to become a mini-biome. In the same way that wetness dominates Jo and Carral’s lives, fluids permeate every part of Hval’s music. She has sprinkled past albums with recordings of breathing and sound effects like liquid trickling and spilling in a quiet space, creating the feeling of an isolation chamber submerged in still, murky waters. The cover of her 2013 album Innocence Is Kinky features a wet face pressed against wet glass, and her fourth solo album, Blood Bitch, is entirely devoted to its titular fluid. Hval celebrates liquid for its drawing and binding power—another way to communicate sensuality and queer romance. On Blood Bitch’s final song, “Lorna,” Hval declares: “No one ever asked me, how do I desire? I don’t think anyone ever talked to me using the word ‘desire’ at all. No one ever told me or taught me how to contain it. It kept existing, but there was no language. Does anyone have any language for it? Can we find it?” Paradise Rot is an endeavor to create that language and articulate that desire, and it remains as relevant to Hval’s artistic practice today as it was almost a decade ago.

That Hval is examining the same issues that moved her from the beginning is a rare feat at a time when artistic reinvention commands the most attention and examination. And with each musical or literary examination of a substance like blood or a concept like desire, she reveals a new aspect. Her work in its entirety, then, offers a multidimensional perspective on those images, building up to an entire world—her beautiful, monstrous, queer Eden.

Hval’s latest musical release, The Long Sleep, revolves around this theme of constant revisiting, with each song calling into question aspects of the tracks that came before it. The lyrics of the opener, “Spells,” begin “You are your own disco ball,” with Hval singing the words in an upbeat, crystal-clear voice; the next song, “The Dreamer Is Everyone in Her Dream,” starts out with her whispering dolefully, “Let’s say that you are your own disco ball / It sounds better, more promising / It doesn’t just sound like you’re broken.” The result is an album that winds around itself, never leaving any detail unexamined or taken for granted. In many ways, this kind of spiral structure is a fitting analogy for Hval’s career. Now, with the release of the newly translated Paradise Rot, we can experience her artistic evolution beyond the shape of a timeline, as a series of challenging examinations melting and bending in on themselves. Like Paradise Rot, Hval’s musical catalog begs constant revisiting and reexamination. Listening to—or now reading—her work feels like getting jettisoned into an underwater reality that fantastically mirrors our own. It would be entirely terrifying, if exploring it weren’t so much fun.