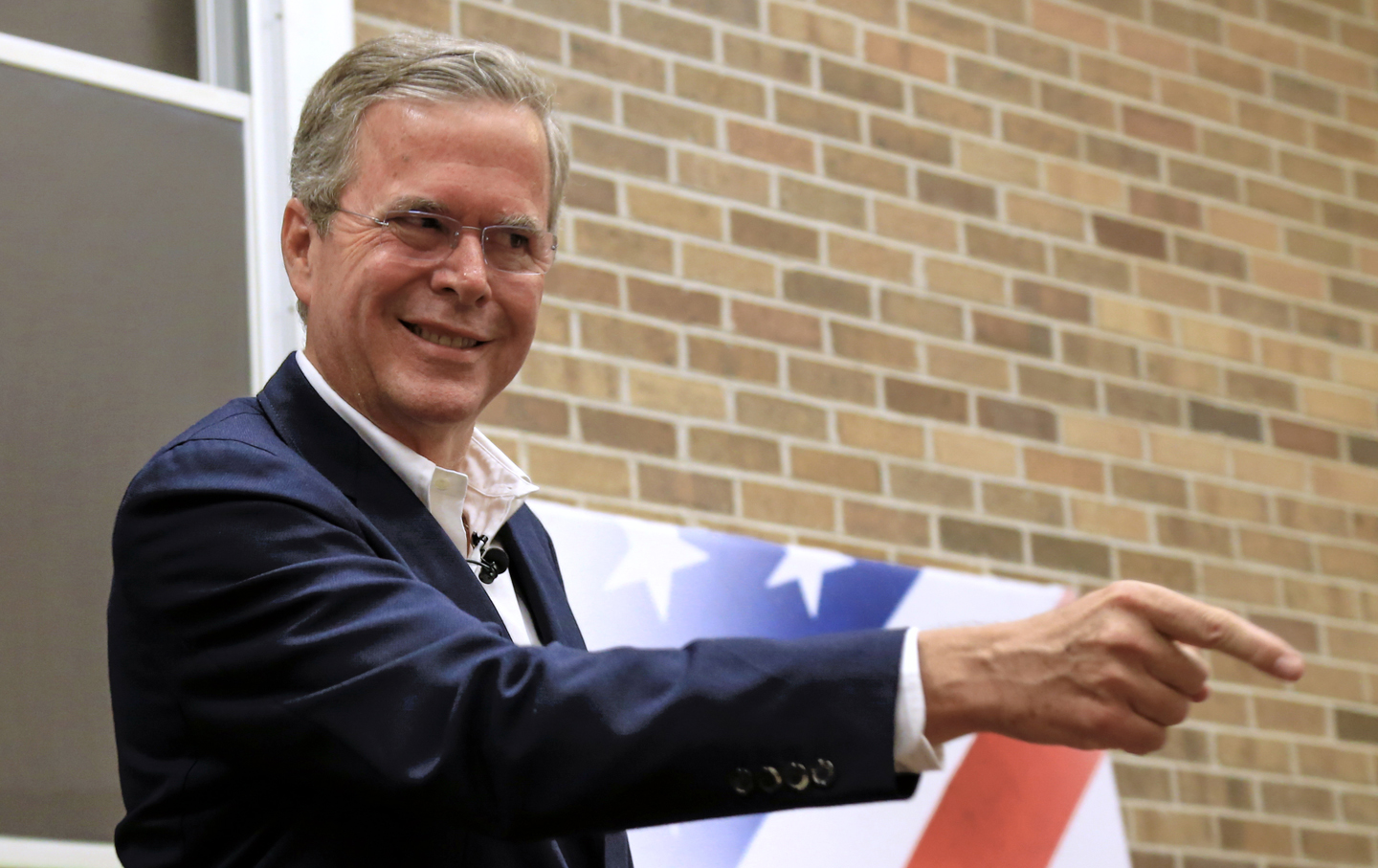 It is no secret that Jeb Bush faces a challenge when the subject is presidents named “Bush.” Of course the former governor of Florida has regard for his father and his brother. But he has faced frequent questioning about whether he would wage wars, neglect the economy, or otherwise manage things as did Bush 41 and Bush 43.

So, as he bids to become Bush 45, Jeb talks up another president.

“One of the presidents that I really admire,” he says, “is James K. Polk.”

At a July town hall meeting in Sioux City, Iowa, the son of one president and brother of another displayed a reasonably detailed awareness of Polk, which certainly distinguishes Bush from most Americans. Bush hailed the 11th president (who served from 1845 to 1849) for a number of policy initiatives — including an approach to tariffs that the contender for the 2016 Republican presidential seems to believe was “pretty extraordinary.”

But, as on so many issues of consequence, this Bush got this ex-president question wrong.

Polk was a horrible president whose actions inspired fierce opposition from foes of slavery who — in the words of the presidential scholars at the University of Virginia’s Miller Center — believed that Polk’s reckless expansionism represented “a transparent attempt to extend slavery into new territories that would become new slave states, thus ensuring that the South would control Congress and the presidency into the foreseeable future.”

Polk was censured by the U.S. House of Representatives and condemned by the Massachusetts state legislature for engaging in unconstitutional military interventions with the “triple object of extending slavery, of strengthening the slave power and of obtaining the control of the free states.”

A decade ago, when I was called upon to discuss George W. Bush’s decision to use military force against Iraq, I frequently quoted a previous president on the danger of allowing the commander-in-chief to steer the United States into combat without proper consideration and a clear congressional declaration of war.

“Allow the President to invade a neighboring nation, whenever he shall deem it necessary to repel an invasion, and you allow him to do so, whenever he may choose to say he deems it necessary for such purpose — and you allow him to make war at pleasure. Study to see if you can fix any limit to his power in this respect,” warned Abraham Lincoln. “The provision of the Constitution giving the war-making power to Congress was dictated, as I understand it, by the following reasons. Kings had always been involving and impoverishing their people in wars, pretending generally, if not always, that the good of the people was the object. This, our convention understood to be the most oppressive of all Kingly oppressions; and they resolved to so frame the Constitution that no one man should hold the power of bringing this oppression upon us. (Allowing presidents to wage war as they please) destroys the whole matter, and places our President where Kings have always stood.”

The president whose actions led Lincoln to pen those words was James K. Polk. As a young congressman from Illinois in the mid-1840s, Lincoln joined his fellow Whigs in battling Polk (a Tennessee Democrat) on many fronts. But Lincoln and the Whigs (many of whom would soon become Republicans) were most ardent in their opposition to the president’s invasion of Mexico on what it was argued were false pretenses. Polk claimed that the invasion was launched after Americans were attacked on American soil blood had been shed on American soil. Believing that Polk had deceived Congress, Lincoln went to the floor of the House and demanded that the president identify the precise spot where the blood was shed.

Decrying Polk as “a bewildered, confounded, and miserably perplexed man,” Lincoln supported the House resolution censuring the president for “unnecessarily and unconstitutionally” beginning the Mexican War.

Joining Lincoln is passionate opposition to Polk was former President John Quincy Adams. A member of the House when the war was launched, Adams declared that the invasion of Mexico was a southern expedition to find “bigger pens to cram with slaves.”

Adams represented Massachusetts, where a young Henry David Thoreau was famously jailed during the course of the war after refusing to pay a small tax. A critic of southern expansionism and what was decried as “Mr. Polk’s War,” Thoreau would later explain that, “I cannot for an instant recognize the political organization as my government which is the slave’s government also.”

Jeb Bush can certainly admire the presidents he prefers. And more power to him for reading up on the lesser-known presidents of the 19th century.

But with regard to James K. Polk, this Bush would be wise to read a bit more broadly — and to consider the assessments of Henry David Thoreau, John Quincy Adams and Abraham Lincoln.