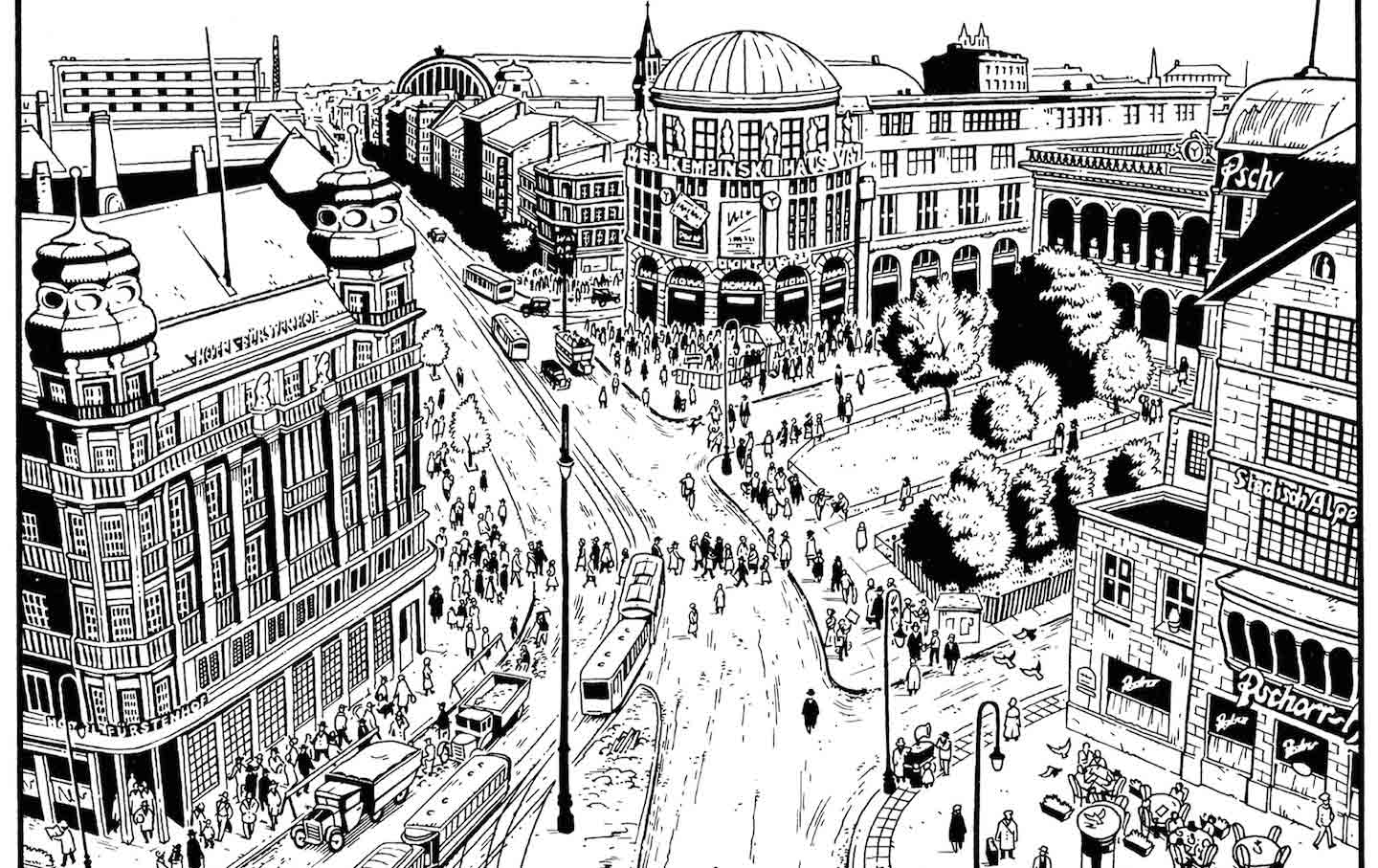 Travel between two differing worlds has been one the core motifs of comics since the baby future-Superman rocketed from Krypton to Earth in 1938. Over the 80 years since, comics of almost every kind—from mainstream superhero titles to long-form graphic books—have been packed with alien worlds, parallel universes, and myriad dimensions and zones. Wonder Woman floats out of Greek mythology and into America. The Black Panther pops back and forth between Oakland and the hidden African kingdom of Wakanda.

The same motif of traversing worlds recurs in the most overtly literary works of graphic fiction and nonfiction. In Maus, Art Spiegelman’s narrative of his father’s memories of the Holocaust, Spiegelman crosses the spheres of species in his indelible rendering of Nazis as predatory cats and Jews as mice, their prey. In Fun Home, Alison Bechdel’s memoir of a childhood shrouded by family mysteries, her closeted father toggles back and forth from his public life in rural Pennsylvania and a secret gay life. And now, in Berlin, Jason Lutes’s sweeping, ambitious new work of historical graphic fiction, an array of characters in the Weimar Republic struggle to find their way in a cultural and political landscape changing beneath their feet.

Berlin begins in the fall of 1928, with the image of a passenger train steaming across the German countryside—toward Berlin, we soon learn—and it ends, in the spring of 1933, with another train leaving the city with one of the original passengers on board. Lutes’s lovely black-and-white ink drawing of a steam locomotive conjures a nostalgic conception of the past for contemporary readers while reminding us that rail travel represented the wonders of the modern age in the time of the book. Roaring along the tracks in 1928, the train was taking its passengers not only to Berlin but also to the future. Reading this book knowing what the coming war would lead to, one can’t help but be reminded, too, of the cattle-car trains that would carry Jews to the death camps.

Jason Lutes dedicated over 20 years to the making of this work of more than 550 pages of nuanced, exactingly rendered pen-and-ink drawings and dialogue. (According to Lutes, he was inspired to write about Germany between the wars after reading an advertisement for a photography book dealing with the period in The Nation.) He was not yet 30 when he started the first volume, and he was over 50 and the father of two when the final book was published this fall. Lutes spent the time well, crafting multidimensional, true-feeling characters in a set of stories connected by the unstable circumstances of their time and place. The events surrounding them are historically factual: the fall of the kaiser, the launch of the Hindenburg, the debates over Marxism in Marx’s homeland, the sexual and cultural freedoms of the Weimar age, and the rise of Hitler and the Third Reich. What Lutes contributes to the exhaustively documented, utterly familiar history of this time is a set of fictional characters from everyday life who ground the period with such intimacy and so much veracity that we feel as if we’re seeing it through new eyes, observing it so closely that we feel it directly.

We meet the two most important characters, a young female artist (Marthe Müller) and an older male writer (Kurt Severing), in a compartment on the train in the book’s opening pages. That their two disciplines, visual art and prose, come together in the pages of comics, is a sly nod to Lutes’s artform. The power of the arts to provide succor and respite in times of duress is a recurring theme of Berlin, as Müller’s drawings mirror her emotional coming of age, and Severing finds solace in recordings of Bach. As the book progresses, we meet a small ensemble of characters: an idealistic mother who aligns with the Communists in the growing political conflict; a hedonistic aristocrat sympathetic to the Nazis; a group of visiting American jazz musicians; a Jewish family who takes in a problematic boarder; a bookish young woman with whom Müller grows slowly, movingly attached; and, in a few brief appearances as a discomfitingly charismatic figure on the ascent, Hitler himself. The varying sets of characters do not intersect or come together in the end schematically; rather, they coexist as distinct and contrapuntal elements. They feel like people, real people who idle their time picnicking, fall in love and squabble, and happen to occupy a volatile place in a world we recognize. The existence of these people in the panels of cartoon drawings is a testament to the richness of Lutes’s creative imagination and the evocative precision of his art.

In just one of many scenes of layered visual storytelling, we watch a woman braid the hair of her young boarder. In nine wordless panels, the slow process unfolds as the girl sits silently with her eyes closed. We know from earlier pages that she is keeping a secret, and Lutes uses an expanse of white space in one panel to suggest it. With the curve of her mouth turned just the slightest bit down and a tiny, perfect line for the girl’s lower lip, we can feel her anguish and almost read the words unspoken.

Berlin is not perfect on every page. There’s an intentionally didactic section with a drawing instructor babbling on about perspective and the vanishing point that would have been just as annoyingly didactic at half the length; two full pages of wordless images of a jazz clarinetist playing are silently verbose; the haughty socialite Nazi sympathizer is a cliché straight out of Indiana Jones; and the final pages of the book feel a bit rushed, with oversized panels and art of faintly diminished quality. In total, though, I count 10 or 12 less-than-great pages out of 550-plus. A marginally flawed masterwork, Berlin is a significant contribution to the fiction of place. Its population may be Berliners, not Dubliners, but they’re rich by any standard and, as cartoons, stunning for their humanity.