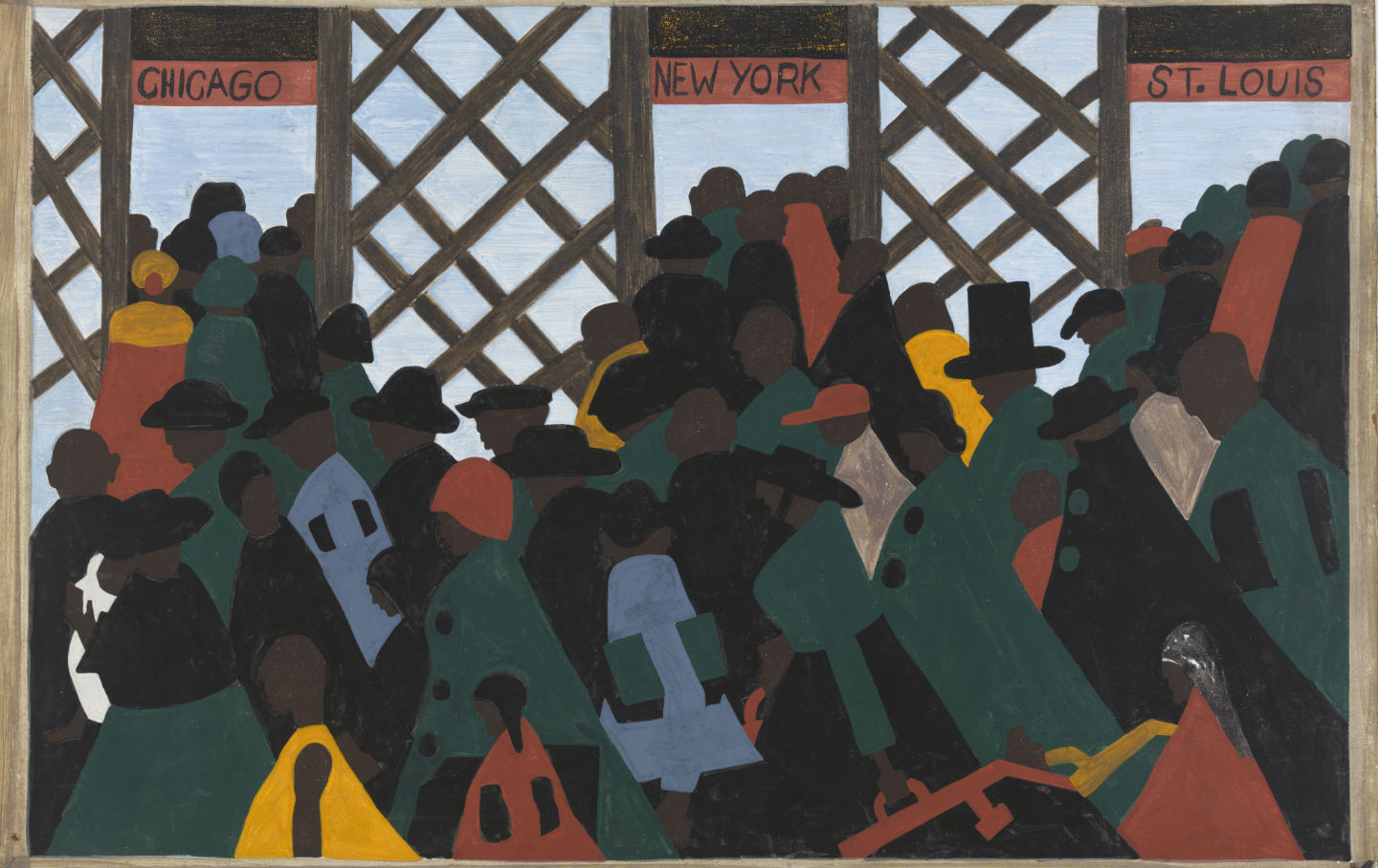 I pick up my life
And take it away
On a one-way ticket
Gone up north
Gone out west
Gone!

—One Way Ticket by Langston Hughes, from The Weary Blues (1938) (Cover illustration by Jacob Lawrence)

“Where in the world is Milwaukee, Wisconsin?”

This was the first thing my great-grandmother said when she saw the return address on a letter she received from her sister-in-law. The year was 1950. The family had just moved to Jackson, Tennessee, after having moved around quite a bit, as my great-grandfather chased work in the wildly exploitive trade of sharecropping. He would make his own way northward shortly after securing work at a foundry there, likely through his brother-in-law. He later sent word for my grandmother to join him. She would make Milwaukee her home in 1955 and never look back.

As a child, when I was told the story of how our black family landed in the coldest and whitest of places, I came to understand that I am part of a greater story, of millions of black and brown women and men who stole away to Canaan Land, as Mahalia Jackson sings in “I’m On My Way.” (She, too, is part of this great story, having resettled in Chicago from Louisiana.)

I considered my family’s story as I looked at the 60 tempera paintings of dark, faceless people represented in “One-Way Ticket: Jacob Lawrence’s Migration Series and Other Visions of the Great Movement North.” Lawrence’s complete series has been brought together at New York’s Museum of Modern Art for the first time in 20 years, and is being shown through September 7. In addition to Lawrence’s iconic paintings, the exhibition features a host of cultural artifacts of the period, providing a deep contextual layering of the social and cultural history of the Great Migration. Curator Leah Dickerman dives into the environment that facilitated Lawrence’s work, to include music (Duke Ellington, Rosetta Tharpe, Mahalia Jackson, Lead Belly) juxtaposed with archival video (Marian Anderson, Billie Holiday) and augmented by first-edition texts and prints from WPA writers (Jean Toomer, Richard Wright, Langston Hughes) and photographers (Margaret Bourke-White, Jack Delano, Dorothea Lange, Gordon Parks).

This ambitious and comprehensive exhibition is the art-history companion to Isabel Wilkerson’s 2010 award-winning winning epic, The Warmth of Other Suns. Lynching, environmental disasters, the Great Depression, peonage, plunder, and more drew out a mass of over 6 million black Southerners, from 1910 through the early 1970s, to Northern and Western cities. Dickerman credits her vision for the exhibit partially to Wilkerson’s book.

I hadn’t realized that scholarship and reportage of black migration was so scant, because the story was always so present in my own life—we lived in Milwaukee and spoke in Southern accents. Yet when viewing the exhibit now, something becomes viscerally clear to me that I hadn’t considered when I first saw these paintings together 20 years ago at MoMA. History, reportage, and craft merge in Lawrence’s work, making it dynamic and urgently present. We see, through the eyes of a 23-year-old man who is wise beyond his years, the political order and cultural chaos of the 20th-century black experience, which itself reshaped America and its politics indelibly.

Lawrence was born in 1917 in New Jersey. His parents had migrated north years earlier, from South Carolina and Virginia. He moved to Harlem in 1930, joining his recently divorced mother, where he dropped out of high school at 16. At the time, black male unemployment in Harlem was near 40 percent, the exhibit notes.

Lawrence drifted between odd jobs and began attending free classes in 1933 at the 135th Street library. He studied later at the Harlem Community Arts Center, taught by prominent artists who were largely unknown to him, but who were significant arbiters of a burgeoning black consciousness that we now call the Harlem Renaissance.

Lawrence made an impression on his instructors that would forge critical relationships, which in turn shaped his career. Charles Alston and Augusta Savage were pivotal figures. Savage and Alston co-founded the Harlem Artists Guild, a professional organization essential to supporting black artists during the Depression. Alston taught Lawrence and provided him with studio space to paint; Savage also taught him and advocated for his enrollment as an easel painter in the WPA’s Federal Arts Project. Lawrence has said he doubts he’d be a painter had Savage not escorted him to the downtown offices of the WPA to sign him up. The Guild served as a clearinghouse for black artists, emerging or otherwise, who needed an institutional affiliation, résumé, and track record to be eligible for WPA funding and other fellowship opportunities.

In telling this history, “One-Way Ticket” underscores the importance of teaching artists. The professional class of writers and artists of the Harlem Renaissance made itself accessible to the ravaged neighborhood’s poor and working-class youth. Savage and her contemporaries were as much activists as they were working artists, in that they recognized the importance of creating a kind of cultural infrastructure to support black artists, and by extension a rich black consciousness.

Alston’s studio space at 306 West 141st Street also created an environment for exchanging ideas. Lawrence rented space there in 1936, when he was about 18 years old. “306” saw many luminaries enter and exit its doors, and Lawrence was a sponge. Langston Hughes, Richard Wright, and Harvard historian Alain Locke all orbited around Lawrence, who absorbed their conversations and ideas around black identity, history, and politics. When Downtown Gallery curator Edith Halpert went searching for black art and artist to show and represent, it was Locke who referred her to Lawrence.

Halpert’s representation was critical to the migration series. She got 26 of the panels published in Fortune magazine, introducing Lawrence’s modernist vision to the world in advance of the show’s opening. It was Lawrence’s first solo gallery show, opening the same day as the Pearl Harbor bombing. It drew collectors from MoMA and the Phillips Collection, both of whom immediately acquired Lawrence’s work, dividing the series between them. The November 1941 Fortune feature was a lavish, four-color printing and for a national moneyed audience, it was an introduction to the great story of African-American migration in the United States.

Lawrence had said of his series, then titled Migration of The Negro, that he painted without worrying about who would see it. The paintings aren’t as concerned with a white gaze as they are with getting the story clear and right. The series is intensely narrative and cinematic in its repetition. The panels share a base brown color, making the yellows, blues, reds, and oranges pop. The captions are stark, matter-of-fact articulations of each scene. Lawrence painted them in quick succession, almost in assembly-line fashion, applying the same colors to preserve uniformity. Alston taught courses in graphic arts, and that aesthetic permeates in the panels.

Yet I wonder how consciously the wunderkind understood that in painting history in this manner, he was responding to the urgent need to reach kids like himself—a young man who likely didn’t see his story in schoolbooks before dropping out. In later interviews, Lawrence has said of the migration series that he wanted to show “a great epic drama taking place in America. The Negro has been one of the great, I guess, focal points of this drama which we as Americans have experienced.”

When we consider this young black man witnessing the influx of Southern-born black people—crowding into Harlem, fleeing a host of injustices and humiliation in the South, only to face moments of cold brutality and inequality in the North—and imagine him in conversation with writers like Hughes, Wright, or Locke, we can see Lawrence finding his own voice in these paintings, locating his family’s individual story in the music of his neighbors’ voices. It is no accident that I left the exhibition with this notion. Dickerman hinted of this framing in The New York Times last December, calling Lawrence’s work an “incredibly innovative form of political speech.”

MoMA commissioned new and original works of poetry, with the assistance of poet Elizabeth Alexander, to capture the voices of the anonymous masses in Lawrence’s panels. Each poet responds to a painting or caption from the series. Poets Nikky Finney, Yusef Komunyakaa, Rita Dove, Natasha Trethewey, Terrance Hayes, and others bring insight, personal history, and narrative to the images.

Yet it’s Tyehimba Jess’s poem, “Another man done…”, in response to panel 22, that bridges past and present. The panel’s caption reads, “Another of the social causes of the migrants’ leaving was that at times they did not feel safe, or it was not the best thing to be found on the streets late at night. They were arrested on the slightest provocation.” Jess appropriates the caption, repeating it in continuous loop, spilling and bleeding each declaration of the year from when the series debuted till today. More than 40 years after black migration ended, as we witness an unconscionable number of black men and women die at the hands of law enforcement, as protests, “riots,” and uprisings overtake the Northern American cities to which our families fled, the warmth of Northern suns still proves harsh.

Editor’s note: An earlier version of this article suggested “One-Way Ticket” is the first time in 20 years that Lawrence’s migration series has been shown in its entirety. Rather, the current exhibit is the first time that MoMA has shown the entire series in 20 years. The article has been corrected.